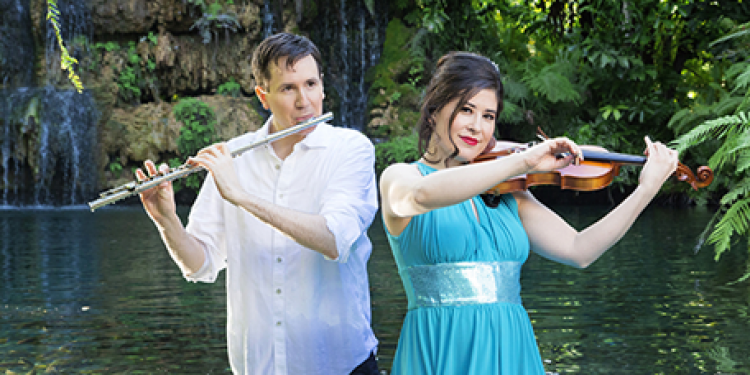 Get Your Gaelic On!

CORNWALL (September 8, 2016) – The Cornwall Concert Series has been connecting great artists with great audiences for three decades. The season opens on Saturday, September 17, 2016 with Juilliard graduates Shawn Wyckoff and Maria Millar, as the duo Sonic Escape. Armed with flute & violin, their game plan – use hyper-instrumentals to fill hearts with indescribable joy – has landed them on hundreds of stages across 35 North American states, many provinces and beyond. They continue to push themselves to the brink – singing, dancing, telling stories, and above all, playing their hearts out with a “wonderfully imaginative… anything goes sense of fun.” (The Washington Post, 2014).   Get your Gaelic on, and join Shawn and Maria as they bring their new show, Celtic With a Twist, to the Celtic heartland of Ontario.

The Cornwall Concert Series Association will mark its 30th anniversary this Fall, and in celebration, has added a fifth concert to their usual four-concert format. On October 24, 1986, the Cornwall Concert Series held their first concert featuring the National Arts Centre Orchestra, with a mandate to bring the highest calibre of musical entertainment to Cornwall and area residents at a reasonable cost. The volunteer management board of the Association has delivered on that mandate for thirty years, as they continue to bring world class music to our own Aultsville Theatre stage.

On Saturday, October 22, 2016, opera comedienne Kyra Millan and her music partner Tina Faye (no not that one!…but still funny), invite the audience into the world of opera through a brilliantly funny, whirlwind concert full of operatic favourites and well-known classical tunes, as well as sketches and improv that celebrate the sublime and sublimely ridiculous elements that make up opera.

Join them as they take one another on in dashing four-hand piano battles, illuminating voice types, bringing smiles with their unique take on “Twinkle Twinkle Little Star” variations. All the while, they weave a beautiful narrative of the challenges of learning to sing, and a brief history of opera. They even take on the challenging subject of “Opera’s Greatest Deaths”.

By sharing opera as the popular music it was and blowing off the cobwebs to reveal the greatest music of all time, a new audience is inspired to embrace and, yes, participate in the fun. What makes it unique is the improvisational comedy with the audience, coupled with virtuosic music performance.

The 30th anniversary season is dedicated to the memory of Sylvia Whitaker, a founding member of the Cornwall Concert Series who passed away in January of 2015. Through a generous donation from Sylvia Whitaker’s estate, the Association is able to host the Toronto Concert Orchestra with Maestro Kerry Stratton on April 9, 2017. This Sunday matinee concert will feature the magnificent music of Wolfgang Amadeus Mozart, and will feature Symphony No. 29 in A as well as the double Concerto for Flute and Harp.

Season subscriptions ($120) and single tickets ($30) for all performances may be purchased in advance (cash or cheque) at these locations: TD Canada Trust, Cornwall Square; Caisse Populaire de Cornwall, 840 Pitt Street, and at the Cornwall and the Counties Tourism, 61 Brookdale Ave, Unit E.   Single tickets and subscriptions may also be purchased at the door on the evening of the performance. For further information, visit www.CornwallConcertSeries.com.