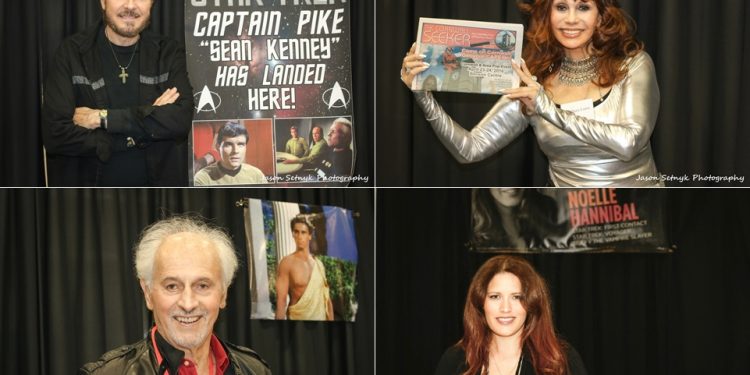 Cornwall Ontario – It was 50 years ago that Star Trek aired for the very first time, and audiences heard those iconic words from William Shatner who played James T. Kirk for the very frist time. “Space, the final frontier. These are the voyages of the Starship Enterprise. Its 5-year mission to explore strange new worlds, to seek out new life and new civilizations, to boldly go where no man has gone before”. Gene Roddenberry’s dream would become a pop culture phenomenon over the decades.

The Cornwall & Area Pop Event celebrated the 50th anniversary of Star Trek this past spring, at its second annual comic con style convention, by hosting celebrity guest who had appeared on the series.

Here are excerpts of Jason Setnyk’s interviews with Star Trek actors Sean Kenney, BabBara Luna, and Michael Forest who each appeared on the original Star Trek, and with Noelle Hannibal who appeared in the Star Trek The Next Generation movie First Contact, as well as on Star Trek Deep Space Nine and Star Trek Voyager. Each were guests at the second annual CAPE event.

“You know why I’ve come Captain, it’s only six days away at maximum warp, and I have it well planned”, Spock said to Kenny’s character of Pike. The character of Spock was ready to risk court-martial from Starfleet to help his friend and former Captain out.

While on the set, but off camera, Sean Kenny gained a unique perspective about Star Trek by playing a character bound to a wheelchair and unable to talk.

“Being on Star Trek was an interesting experience. When I played Christopher Pike, sitting in that wheel chair unable to speak, it was like being a fly on a wall. Others on set were not discounting you, but they were talking like you were not even there. Observing the actors, I got to hear how people felt about the show. It was an interesting phenomenon hearing actors say disparaging remarks about William Shatner for example. Not everyone can be the lead role on set, but they don’t want to feel overshadowed either”, revealed Kenney.

Star Trek was a groundbreaking series for many reasons, including the first inter-racial kiss. It was also one of the first television series to feature a disabled person in a prominent role.

“Playing a character bound to a wheelchair unable to speak was ground breaking. This was before the Six Million Dollar Man came along. My role inspired some people with disabilities. A person in a wheelchair once came to me and said you gave me the reason to live. That is the most profound thing I ever experienced in my life from a part I played. They wanted to live because of my character. It was joyous and emotional”, divulged Kenney.

The character of Christopher Pike was revisited in the new Star Trek films directed by J.J. Abrams.

“Bruce Greenwood played the look and feel of Jeffery Hunter in the episode of ‘The Cage’ well in the new Star Trek movies. He delivered his facial expressions perfectly. JJ Abrams is a student of Star Trek and he did a good job directing the character of Pike. It’s interesting how the character of Christopher Pike is more serious, while the character of Captain Kirk is more provocative”, remarked Kenney.

The more provocative Captain Kirk also had many space girlfriends, but his most interesting girlfriend in the series was from a parallel universe.

BabBara Luna played the character of Lt. Marlena Moreau in the Star Trek episode “Mirror, Mirror”. In this episode Captain Kirk, Dr. McCoy, Chief Engineer Scott, and Communications Officer Uhura accidentally travel to a parallel universe after a transporter malfunction. They meet doppelgangers of the Enterprise crew including Spock with a beard.

Luna’s character shared several scenes with William Shatner. She was the “Captain’s Woman” in this parallel universe and (spoiler alert) she saves Captain Kirk’s life using a secret weapon called the Tantalus Field.

What BarBara Luna remembers most of the show was its diversity, which was groundbreaking at the time.

“When I went on the set of Star Trek I saw a guy with funny ears, a black woman, a Russian guy, a Scottish guy. It was so different from anything I had ever done before. What is this Star Trek show? I didn’t know anything about it. It was just a job. Nothing special. Just Sci-Fi in the 1960s, not a big deal”, Luna recollects.

However in retrospect it was a big deal. Star Trek portrayed a future where diversity and ethnic equality were the norm. The main characters were American, Scottish, African, Japanese, Russian, and even alien. They were cast to represent diversity, but their ethnicity was not relevant to the characters they played as Luna explains.

BarBara Luna is thankful to the opportunity Gene Roddenberry gave her.

“I’m so thankful to the fans and Mr. (Gene) Roddenberry (creator of Star Trek) to be treated in a special way. The fans are so loyal. It’s phenomenal. I didn’t quite understand it at first. When I was offered the role of Marlena (Moreau) the character had no accent or ethnicity, she was just a cool character. It wasn’t stereotypical. Look at the cast: (Nichelle) Nichols, (George) Takei, and Walter (Koenig). There was something so different about it. I don’t know if this is the biggest reason for its lasting success, but the fact that they cast actors not because of their ethnicity was groundbreaking”.

In addition to starship captains and space babes, the original Star Trek series also had some interesting villains, including one played by Michael Forest.

“Let me tell you something about Star Trek. When Star Trek first came out it wasn’t that popular. It was suppose to be a five year show, and it only made it for three seasons. It was well done, but it wasn’t very popular in the United States, not at first”, explains Forest.

Forest’s first impression of Star Trek came from Leonard Nimoy. The two were working on another film when Nimoy got the casting call for Star Trek.

“I knew Leonard Nimoy before Star Trek. We were working on a low budget film called Death Watch (1966) with Paul Mazursky and director Vic Morrow. One day, when we stopped shooting, Leonard said he had an audition for a science fiction show. When he came back I asked him how the audition went. He said it was terrible, that they made him wear these funny rubber ears. He said it’ll never go anywhere. The rest is history. He would become a multi-millionaire actor and the show eventually became a huge success”, Forest reminisces.

“I enjoyed working on Star Trek. I went from playing a bad guy in a Western to playing a Greek God in Star Trek. There is irony for an actor to do this role. I looked at the script and said to myself this is good stuff, it is well written. I kind of like it. I auditioned three times for the role. They asked me take my shirt off the first time to see my build. It must have been alright, because I got called into another audition. They asked if I could speak in a British accent. I asked if I could try a Mid-Atlantic accent instead. They said oh. I did it, and they cast me me, I got the role. I worked alongside the lovely Leslie Parrish, a beautiful girl, and wonderful person to work with. The episode was shot in five days. The Six-Day War in Israel was ongoing during the filming. Everyone had portable radios listening to the crisis in the Middle East. I couldn’t, I was memorizing my line. It was surreal working on a film while a war was going on. It was a pleasure to work on Star Trek. It was a great deal of fun”, says Forest.

Thanks to fan letters and support Star Trek was saved, and it spawned new television programs and movies. Actress Noelle Hannibal saw that first hand. She appeared in the film “Star Trek First Contact” as the first known female Vulcan to step foot on earth. She also appeared on “Star Trek: Voyager” and “Star Trek: Deep Space Nine”.

“I grew up in Los Angeles watching Star Trek with my Montreal born mom who attended McGill University with William Shatner. I have to admit, I was definitely more of a Star Wars kind of girl. I started getting into The Next Generation, though and that is still my favourite Star Trek series. The first time I worked on anything Star Trek was as a Stand In for Terry Farrell (Dax) on Deep Space Nine. I went to an open call for First Contact and swear I got the job because I was the only girl who knew the Vulcan salute. The First Contact cast was phenomenal. I truly enjoyed my week working with them, though I was disappointed Wil Wheaton wasn’t in the film (though I know some Star Trek fans may not agree with me) I have since had the opportunity to meet Wil at various conventions and we have bonded over our great love for our LA Kings. It has been fun reuniting with everyone at cons (Comic conventions)”, Noelle Hannibal reminisced.

Will Star Trek last another 50 years? Perhaps. In 2016 the third installment of the rebooted original series movie, Star Trek Beyond, came out. There is also a new Star Trek series coming out on CBS All Access in January 2017 entitled “Star Trek: Discovery”. All indications seem to suggest that Star Trek will continue to live long and prosper.