by The Seeker
in Columns, News
Reading Time: 2 mins read
14 1 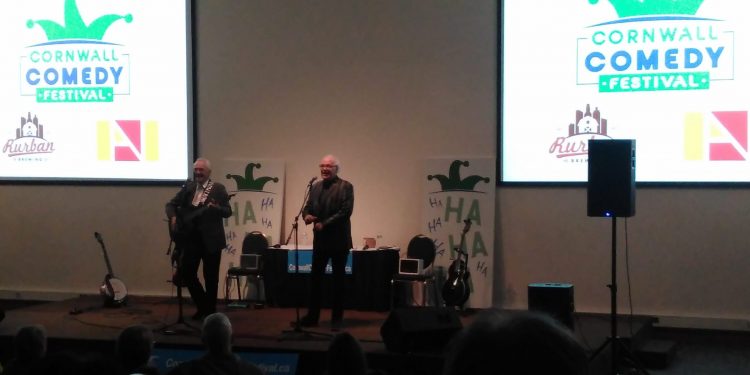 The show, part of the ever-growing Cornwall Comedy Festival, saw young and old get together for a night of music and laughter, and Bowser and Blue did not disappoint.  From Harmonica, to guitar, to banjo and  from politics to old age pension, the dynamic duo filled two hours with catchy tunes and clever jokes.

The Festival, brain child of Shawn Fowler of Lancaster’s Sweet Tooth Bakery, aims at presenting the finest talent in the Canadian comedy industry to the residents of Cornwall and are and giving  patrons a first-rate comedic encounter.  “We’re going back home with cup cakes,” declared Bowser after introducing Fowler, which the audience was quick to correct.  This was a true testament of how well-known the bakery’s butter tarts are in the region.  The night culminated with an epic rendition of the Canadian anthem, one that could rival Jimmy Hendrix’s version of the Star Spangle Banners.

Rurban Brewery and NAV Canada were the two main sponsors of Saturday’s event.  “It’s the help of community minded businesses in Cornwall that make these shows a reality,” said Fowler in an interview with The Seeker.

All the shows taking place throughout the year help fund the bigger week-end long festival in the spring, which also doubles as a fundraiser. Since the first edition in the spring of 2014, over $15,000 were raised for local not-for-profit groups.

The next show will take place on December 9 and will feature the 2015 winner of Sirius XM’s “top comic” and Montreal-based Stand-Up Comedian Derek Seguin.   To buy tickets or for more information about the Cornwall Comedy Festival, visit http://www.cornwallcomedyfestival.ca