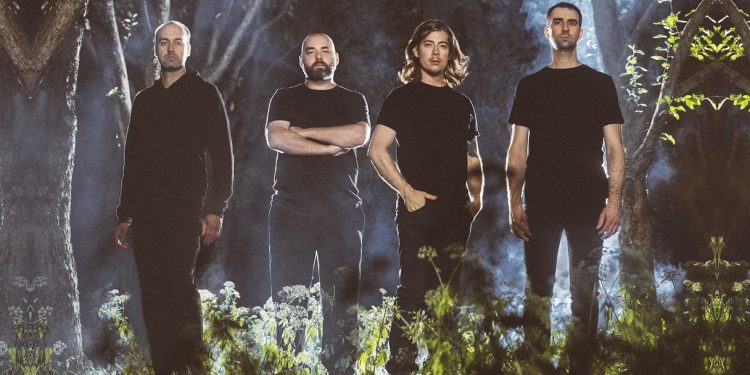 The music video “Fill the Void” has funeral imagery that relates to the title of the album “Remember Death”. The new video can be watched and heard here on Youtube.

“The imagery and general mood of the video definitely relate to the album title, to the lyrics of the song in question and also to the artwork of the album. Two of the people pictured in the artwork appear in the video. In turn, the title “Remember Death” is a kind of summarization of the lyrics of several songs on the album. Everything is connected. We always pay very close attention to the imagery of everything that is band related so that there is a consistency across the board”, said lead vocalist and bass player Jean-Philippe Lamonde.

The new album features 11 fantastic songs that are fast, technical, melodic, and catchy. The song Lamonde is most proud of is entitled “Allies”. The five minute song has an epic feel to it.

“I’m gonna say the song “Allies”. It’s one of the first ones we wrote for this album and one of the more “epic” ones. It goes through a lot of different moods and tempo shifts. It displays all the best we have to offer in a neat 5-minute package. I think it will quickly become a fan favorite”, Jean-Philippe Lamonde stated.

“Remember Death” is Mute’s first studio album in five years. In reality the album took three years to write and then record, because the first two years the band was touring. Lamonde was happy to be back in the studio, because according to him that is where the magic of creating new music happens.

“We’re a band that works slowly. We never really intend take that long of a time in between every album, it just happens that way. Every time. What people must understand is that in reality, it didn’t actually take us five years to do this album. For the first two years of the five-year gap, we just focused on playing shows. We didn’t spend one minute writing new music. So when we decided to make a new record, that was sometime in 2013. So it really “just” took three years. As for being back in the studio, it’s where the magic happens, as they say. We get there with a blank slate and slowly watch it come together. It’s always very special to see the creature come alive,” Jean-Philippe Lamonde explained.

Lamonde thinks that punk music has been on an upward momentum in recent years. He has also noticed that a lot of prominent punk bands have been releasing albums in 2016, which may or may not be influenced by the political situation in the United States.

“For sure there has been some kind of upward momentum in the last few years as far as this genre of music is concerned. We certainly hope to ride a little bit of the wave in the next years. As for the motivation behind all of these bands releasing new albums in 2016, I can’t really say. Records can take a long time to make, maybe some of these guys have been working at it for many years and politics have nothing to do with it. Then again some others might have been very inspired by the political situation”, Lamonde stated.

Mute have played over 600 concerts in 25 countries, and toured with bands like Rise Against, Nofx, Lagwagon, and Bad Religion. One concert that really stands out for Lamonde is the time they opened for Offspring on the main stage at the Québec City Summer Festival in 2012.

“After so many concerts, there are obviously a lot of amazing memories. It’s hard to pick just one, but I will go with the time when we opened for The Offspring on the main stage at the Québec City Summer Festival in 2012. First of all, it was the show where we played to our biggest crowd ever. There must have been 30,000 people there. As it was in our hometown, the reaction was exceptional. 30,000 people can make a lot of noise I can tell you that. Moreover, very few “local” bands have the privilege of playing on that stage. It’s basically the biggest venue we could possibly play in Québec City, so there is also a sense of accomplishment related to all that,” Jean-Philippe Lamonde reminisced.

The band is currently touring in Europe, but they will be returning to Canada in mid-November. They have four Quebec gigs booked at press time.