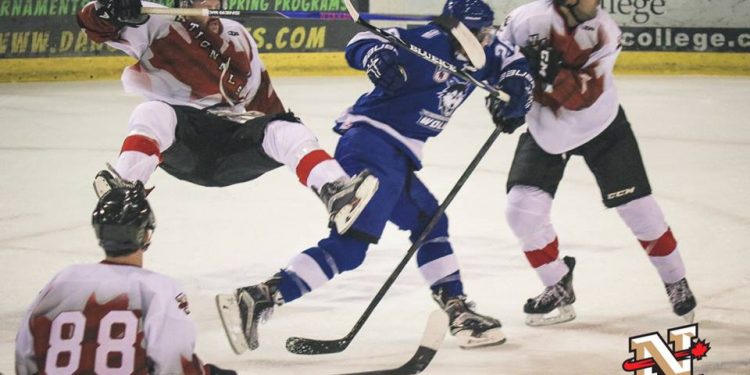 Cornwall Ontario – It was a weekend of firsts for the Federal Hockey League’s newest team, the Cornwall Nationals.

Cornwall picked up its first road victory on Friday night before falling for the first time on Saturday night on home ice, a 3-2 defeat at the hands of the Watertown Wolves.

Ed Zdolshek made 32 saves to backstop Watertown to victory in front of 1,117 fans at the Civic Complex.

Watertown opened the scoring at 3:43 of the first as Shane Halaas snapped a shot over Cornwall goaltender Olivier Gervais’ shoulder. Then, Michal Beranek buried a wrist shot past Gervais at 7:07 of the opening period to open up a 2-0 lead for the Wolves.

Moments after Zdolshek made an outstanding save at one end, John Schiavo scored a powerplay goal at the other, as the Wolves took a 3-0 lead with 2:50 to play in the middle frame.

But, MJ Graham put the Nationals on the board when he was rewarded for his hard work in front of the Watertown net. Graham pounced on a loose puck and finally solved Zdolshek with 20.7 seconds left on the clock.

The momentum carried over to the third for the Nationals, who would eventually capitalize on a powerplay. Lou Dickenson one-timed a perfect cross-crease feed from Jeff Legue at 3:04 of the period to bring Cornwall to within a goal.

Gervais was tagged with the loss in goal for Cornwall, despite a 40-save performance. Watertown outshot Cornwall 43-34.

The announced stars were Zdolshek (first), Graham (second) and Schiavo, who had the game-winning goal.

The Nationals are back in action next Saturday when they visit the Berlin River Divers once again. Cornwall’s next home game is Sunday, November 20th vs. Watertown.

On Friday Anthony Mezzagno scored twice, including the game-winning goal, as the Nationals edged the Berlin River Divers 4-3 in their first ever FHL road contest. Yan Dumontier and Shai Rabinowitz also scored for Cornwall, while Jason Dolgy and Sylvestor Bzdyl each chipped in a pair of assists. Brandon Billie made 30 saves in goal for the Nationals to earn the victory.