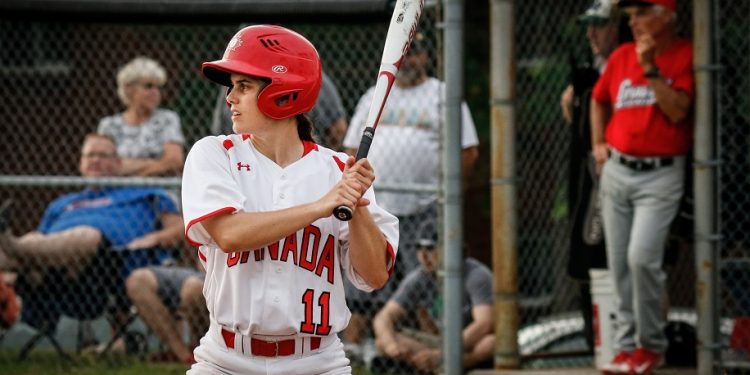 Cornwall Ontario – Local athlete Jenna Flannigan, who plays women’s baseball for Canada’s national team, has been a hit helping her country succeed at international competitions. She was a part of the teams that took silver at the Pan Am Games and at the WBSC Women’s Baseball World Cup, and bronze at the IBAF World Cup.

Last summer Jenna Flannigan showed off her skills to the hometown crowd when the Canada Women’s National Team played against the Cornwall River Rats Men’s Senior Team in an exhibition game prior to the Pan Am Games. It was a fun family affair for Jenna Flannigan, who faced off against her brothers and her father who coaches the River Rats.

“It was amazing to see the support from local businesses and the community when I played at home against my summer team, the Cornwall River Rats. I am very fortunate to have the opportunity to play with my brothers and be coached by my father,” said Jenna Flannigan whose team rallied from an 11-7 deficit to win 12-11.

The sport of baseball is in Jenna Flannigan’s genes, and she learned tons about the game from her father and her brothers growing up.

“Growing up, the support from my family played an important role in my success. I always had someone I could play catch or someone to hit me ground balls or fly balls for more fielding repetitions allowing me to become a better player. I’ve learned a lot about the game not only from my father, but also from my brothers,” Jenna Flannigan stated.

At the Pan Am Games, Jenna Flannigan and the Canada Women’s National Team took silver, losing in the finals to the United States. Although winning gold would have been fantastic, taking silver was a huge accomplishment for Jenna Flannigan and the Canadian team – Both for winning silver, and for the fact that women’s baseball debuted at the PanAm games for the first time.

“It definitely does not feel like a disappointment. Although we didn’t win gold, we were competitive and were able to celebrate the fact that women’s baseball was in the Pan Am Games for the very first time. It was also special to have the event on home soil with our families and friends being present to support us. It’s the first time that we got to participate in a multi-sport event and so we also took the opportunity to support and encourage our fellow Canadian teammates at the Pan Am Games,” Jenna Flannigan reflected.

At the WBSC Women’s Baseball World Cup 2016 in Gijang, Korea, the Canada Women’s National Team went 4-1 and took silver. The only team to defeat Canada was Japan who were ranked the #1 women’s baseball team in the world after winning the tournament the previous four times. Visiting Korea and playing in the World Cup were both unforgettable experiences for Jenna Flannigan.

“It was an unforgettable experience. It was great to experience a different culture. The organizing committee did an incredible job planning the event. It was also great to see new teams (India and Pakistan) field a women’s baseball team to participate in the event. The World Cup in South Korea has been the biggest World Cup so far with 12 teams which demonstrates the progress women’s baseball has made in the last decade,” said Jenna Flannigan.

Jenna Flannigan also won bronze with her team at the 2012 IBAF World Cup in Edmonton. She was selected to the World Cup All-star Team with an impressive .586 batting average, 17 hits, and 14 runs scored. Her fondest memories of that experience were off the field, not on the field. She had the opportunity to visit a military base in Edmonton, and she met some very inspirational people.

“Although there were many memories on the ball field, I remember many great moments off the field leading up to the tournament. For example, we got the opportunity to visit the military base in Edmonton and to meet some inspirational people like novelist, Kelly Falardeau, and paralympian, Viviane Forest,” Jenna Flannigan reflected.

Jenna Flannigan only sees her team mates a few weeks a year, but she keeps in touch with them through social media.

“Since we have players all over Canada from coast to coast, it is very difficult to meet and practice/play as a team. We only spend approximately 2 weeks a year together as a team, but we try to stay up to date with our teammates through social media,” Jenna Flannigan stated.

Last year Jenna Flannigan completed her Masters of Science in Human Kinetics at the University of Ottawa. She was able to successfully balance her athletics and her academics.

“I completed my MSc in HK last year before going to the Pan Am Games. Sometimes it can be difficult juggling school and sports, but it’s helpful to remember what’s important and why you play the sport,” Jenna Flannigan stated.

Whats next? The next Women’s Baseball World Cup takes place in 2018, and the next Pan American Games will be in Lima in 2019. Men’s baseball is returning to the Olympics in 2020, but unfortunately women’s baseball is not on the mound this time around.

Women’s baseball has made impressive strides in recent years, and Jenna Flannigan has been an important part of the sports success.