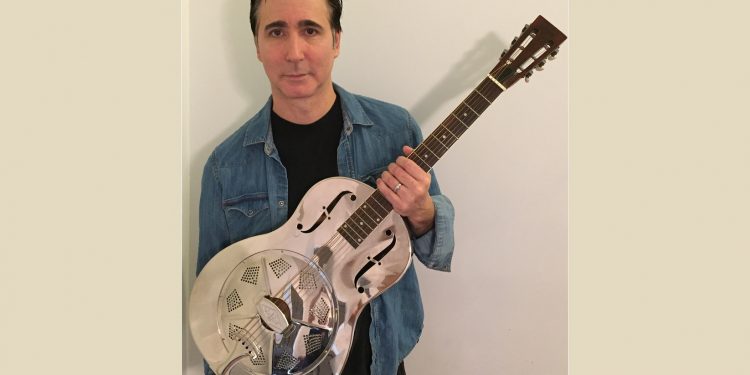 Ottawa Ontario – Actor Spencer Rice is best known for his role on the television program Kenny vs Spenny (KVS), however he is also a talented musician. He is touring Ontario starting on December 10th at Café Dekcuf in Ottawa.

His music falls in the categories of blues, country, and classic rock, however the song “I Just Wanna” has a raw garage rock sound reminiscent of bands like Iggy and the Stooges and MC5.

“I think it’s a solid tune (I Just Wanna). It helped that I had Jay on guitar. I was channeling Iggy (Pop) on that one,” said Spencer Rice.

Rice’s biggest musical influence is John Hammond, but the biggest influence on his life and career were The Beatles.

“My biggest influence is solo blues artist John Hammond. I saw him many years ago on the advice of the late David Carradine and he blew my mind. He’s the main influence in terms of a lot of my playing style. My general thing is to play the songs I’ve loved most over the years. The songs I play, genre-wise, usually fall into blues, country and classic rock. The songs I write are comedic, and I usually play a couple when I perform, but until I can write on par with my faves, I’ll interpret their music. The Beatles have had a huge influence on my life and career. Without them, I’d probably be real estate agent, or something,” Rice stated.

His fans are thankful he choose entertainment instead of real estate. However, those who are familiar with Spencer Rice’s comedic work are often surprised by his live music set. Rice find music challenging and much more difficult than comedy.

“Yes, people are surprised by my music. I benefit from low to zero, expectations. I’m not a natural. I’ve practiced a crap-load over the years to get to where I’m at. Playing solo is especially hard. It’s gratifying and more difficult for me than comedy. I love it. I’m very stubborn, only playing what I want, with no concern about commercial success. I just want to make money for the bar I’m playing, so I’ll be invited back. That’s quite challenging these days,” Spencer Rice divulged.

What can fans expect when they see Spencer Rice in concert? Well there are some comedic elements to his live show. Kenny vs. Spenny is something Rice can’t escape – so he embraces it!

“I stand alone singing, playing guitar and blowing harp. I try to encourage people to listen to the masters – especially young folks. I interact a little with the audience, but I need to concentrate to pull off a solo show. That said, I’m a smart-ass, and there are always some laughs. On one song I wrote about KVS I wear a fake octopus on my head. To the best my knowledge Muddy Waters never did that, but the kids like it. KVS is something I can’t escape, so I embrace it with gratitude,” Spencer Rice declared.

“Not sure about the genetic component. I’m more environment with that stuff. Yes, Lauren Collins is my cousin. She’s a great actress. Also my cousin Marjorie Gross, who wrote for Seinfeld (4 episodes), Larry Sanders, Get a Life and The Bob Newhart Show, among others, and introduced me to The Beatles, which was a major influence interns of getting me interested in show business. Her brother Jonathon, a great writer, and all-around hilarious dude, got me into pro wrestling, which in many ways influenced me, especially on KVS,” Spencer Rice noted.

On Kenny vs. Spenny, Spencer Rice got to work with Trey Parker and Matt Stone of South Park. The two animators became executive producers of KVS in the show’s fourth season.

“For the most part they were cool enough to let us do our thing. Amazing talents. Still can’t believe they loved KVS,” Spencer Rice marvelled.

The Kenny vs Spenny actors also hit the talk show circuit in the 2000s and Rice was a guest on programs like Jimmy Kimmel and Conan O’Brien.

“O’Brien in NY was intense. He was a comedic force of nature. Kimmel was the most fun in terms of a partying. Sarah Silverman was there. Love her. I messed up and said something negative about Huey Lewis to Jimmy, not realizing he was his best friend. He would never remember, but I’ll never forget. And for the record, I saw a piece on Huey on some reality show, and he seems super cool,” Spencer Rice observed.

The show Kenny vs Spenny, which aired from 2002 to 2010, was nominated for three Gemini Awards. Although the show was very successful, don’t expect it to get resurrected on Netflix any time soon.

“Other than KVS Live, I’m focusing on live music and comedy. I’m also doing an entertaining sexual awareness show on university and college campuses with Bachelorette alumni and certified sex coach, Shawn Evans. Plus I write comedy pieces for a couple newspapers,” stated Spencer Rice who has a sex advice column in the Windsor Independent.

What’s next for Spencer Rice? Will you be releasing an album of your music?

“Hahahahahaha. No way. The record business makes the past US election look like a drum circle at Venice Beach. I just want to play live and get better at the solo craft. I tour with Kenny doing KVS Live, which is a blast, and as I said, I do other live shows. Who knows what the next few years will bring. Right now I’m just trying to make a living like everyone else to support my family and my wrestling addiction,” Spencer Rice concluded.

The upcoming Spencer Rice tour is being booked and promoted by the Diamond Mine Agency.

If you would like to see Spencer Rice performing blues, country, and classic rock – with a hint of comedy, you can see him live on Saturday, December 10th, 2016 at Café Dekcuf. Opening the show are Chris Benton, Danielle Allard, Project Mantra, and Logan Groves. Advanced tickets are $12 and general admission is $15. The doors open at 7:30pm and the show is 19+.