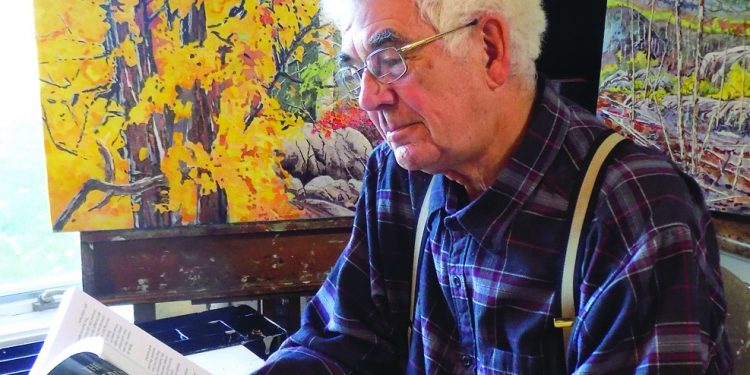 Cornwall Ontario – If you want to find out what local artist and author Alan Bain has been up to recently, now is your chance! Today, on  Saturday, Nov. 19th, from 11am – 4pm, come to Coles Bookstore, Cornwall Square and see for yourselves!

The Seeker is an avid supporter of the Arts and Culture in our community and we are always “seeking out” the hidden gems (so to speak). This week I discovered one in the form of a geologist, outdoorsman, teacher and artist, who has spent many years roaming the northlands of Canada – better known to all of us in the Arts community as Watercolourist Alan Bain who together with his equally talented wife, Audrey (who I went to college with in 1979 and interviewed last year) operate Windrift Studio and Gallery in Long Sault. I had the pleasure of sitting with Alan in his wonderful studio and talking to him (as an author this time).

Interview and Photo by Mai-Liis Renaud

Here is my Seeker-Style 5 Question Interview with Alan Bain.

#1 – I have always known you as a Watercolour Artist Alan Bain, but now I discover that you are a man of many talents. including an “Author” When did you begin your writing career and is your novel “The Kimberlite Adventure” your first book?

I began writing in 1956, my second undergrad year at McGill. The Science program insisted that I had to take one Arts elective. I took a Creative Writing course with a lady professor who took us through poetry, character sketches, short stories and finally demanded a plot outline for a novel. That outline, along with all the other University memorabilia, got put away and forgotten. What followed was 50 years of experiences which included: 11 years of bush work, marriage to a lovely artist, travels across Canada and years of hunting, fishing and revisiting the north for photography and painting. 1988, Audrey and I moved from a huge old house in Morrisburg to our present home. The memorabilia almost got thrown out, but that outline caught my attention. I began adding scraps and details. For years, there was never a whole story. I wrote hunks and chunks that I enjoyed – mostly real bush experiences. My Dad, Director of Engineering and Maintenance in Air Canada, helped. He lived the war years, he was involved with the Canadian Government’s Trans Atlantic Air Service (CGTAS). He knew the Lancaster and the Rolls Merlin engines. More chunks got attached. I began to realize that I had the thread of a story. Good guys and bad guys began to emerge – I got to know their characters, what they would do and say next. What was needed was a love story to stitch the whole thing together. 56 years with my lady helped, but that was difficult writing – couples don’t often make notes as they live their lives. Run-down clubs like “The Coronade” existed all over Montreal, and they were a welcome diversion for over-worked university kids. For several years I helped Montreal headquarters of Boy Scouts on the “Camping Promotion” committee. We taught Scout leaders, who, in turn, would teach their scouts. Before we really learned how to organize outdoor camping we had several disasters – the Warriors’ humorous camping experiences came from there. A friend, a retired aircraft crash investigator, helped me design the Lancaster’s fate. My son-in-law is a retired police Detective. A more distant friend worked with Montreal’s Organized Crime Unit. Glenda Eden, a talented neighbour, edited the first manuscript and made 1000’s of suggestions.

Is this your first book?

Yes, my first – and I have to add – I love the story. I re-read and enjoy the experiences all over again. However, there is an interesting addendum. I read an article recently that said, “Never write an epilogue. If you feel you must, then take a careful look at it. Probably, there is a follow-up book right there.” Interesting possibility, maybe I’m not done yet!

#2 – Picking up a book and reading is a bit foreign to me these days as I never seem to have time to sit for five minutes but as I always say, “everything happens for a reason” and I believe when Alan handed me a copy of his novel the message was clearly – sit down, take the time and enjoy! I am now in the process of reading the “Kimberlite Adventure” which I do have to say is amazingly written, with characters that you feel you know as they are so real with the landscape and events described as though Alan is actually painting the scenes. Could you please tell me what the story is all about, briefly of course, as we want our readers to pick up their own copy when they meet you at your “Book launch” today.

The story is historical fiction, but it is also uniquely Canadian. It relates my experiences, with aircraft, canoe travel, walking the woods and my memories of the landscapes. It centers on a 1943 crashed aircraft, bearing an unbelievable treasure, which is lost in vast north woods of boreal Canada. Thirty-three years later two geologists chance upon a lead to the fortune. That same lead sets forces of good and evil in motion – each determined to fight their way to the prize. The two men are immediately thrust into compelling, exciting and often dangerous adventure. When a romance and love enter the story a beautiful woman joins their team. The trio are assisted by chance and serendipity, but they must endure persistent threat which can erupt into violence at any moment.

#3 – I believe the outline for this adventure story was written many years ago, but “art and painting always got in the way”. What made you decide to put aside your art and focus on publishing?

The book, in its ragged form, has been around for years. I began to think about publishing two years ago. I had no idea how time-consuming the collection of facts and the re-writes and organization would be. Moreover, as I got into the story I would lie awake at night and the characters would talk to me – adding, elaborating and extending the plot. I loved it! It was exciting stuff. But there was no choice – it demanded full-time attention. I disappeared into my office and hammered out the first draft. Nevertheless, Audrey and I never got completely away from our art activities. In 2015 we put up 7 shows. In 2016 we have put up 5 so far, and 2 more to come. It turns out writing is an evolving process. Like good cooking, it takes time for events to resolve themselves. Our art became a welcome distraction, time away from actual writing to allow for imagination to flourish, although the typewriter was never far away.

#4 – I believe all the illustrations in the novel are done by yourself and your equally talented artist wife Audrey … How did you get the ideas for these sketches or are they actually done outdoors?

That was the fun part! Audrey and I never go anywhere without a camera, a sketch book or our paints. We have a stack of sketch books that are full of our adventures. Sketches always precede paintings – usually more than one, often with even newer ideas scribbled in later. So, when the idea emerged to support the story with sketches, the research and selection was easy. Rapids, pictures from high country, campsites, aircraft, quiet mountain lakes – all those were easy. And many were done on site. There was a real problem though. Turns out I don’t draw animals well. Audrey has studied portraiture, so doing people, and animals, was a natural. There is more to the illustration story. I needed a cover – not a simple idea, I found out. I searched our catalogue of thousands of photographs and eventually settled for one – a haunting sky scene – that I had taken several years earlier in November while deer hunting. I think the Lancaster came from my Dad’s collection. Sky and Lancaster combined to make a dramatic picture. Cornwall City Press did the marvellous cover design from there.

#5 Kimberlite is available where?

I was pleased and thrilled when Coles decided to accept Kimberlite Adventure. It meant the book had accomplished a critical plateau. I now have a contract with Coles. The book will be on display, and for sale, at Coles Book Shop in Cornwall Square, starting November 4. That opens the path to present the book at Indigo and Chapters locations across Canada. That kind of extension will inevitably require further printing runs.

I will be signing copies of Kimberlite Adventure at Coles Book Shop in Cornwall Square TODAY, Saturday November 19th, from 11:00 to 4:00 pm.

What does the future hold?

We never seem to slow down! Audrey and I just returned home from an Algonquin painting trip – the last of fall colours. I had paintings displayed at the Visitors’ Centre in the Park. No sooner were we home than we made a quick trip to Ottawa to hang a set of paintings at Zolas Restaurant on Robertson Rd. in Kanata. Those paintings will be there for the month of November. I will be busy most of November preparing a battery of small paintings – 5X7, and 4X6 – all of which will go on display November 26 and 27 at the Shenkman Centre for the Arts. Plans are already forming for art activity in 2017. The idea of a sequel to Kimberlite is beginning to take form.

Thank you Alan for the chance to spend some time with you and Audrey and the Seeker wishes you all the best in your future projects and also for a Very Successful Book Launch here in Cornwall.

For more information about Alan and Audrey Bain, visit their website at: www.alanaudreybain.artbo.net