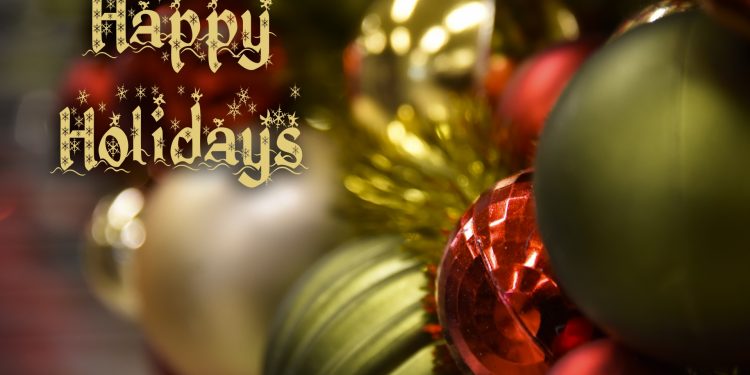 I received a letter this week from a nice person who was full of compliments about the paper. She began by stating that she and her family have read the paper absolutely each week since the first time it hit the stands and have “thoroughly enjoyed its content.”

I was happy to read how somebody has been touched by our stories, every week, since its inception.
However, she continued with an “however”.

The reader expressed her disappointment in the fact that over the last few years, we have chosen to use the term “Happy Holidays” rather than “Merry Christmas” this time of year. Looking back at all our Christmas issues, I realized that in 6 years of existence, we used many various terms from “It’s that most wonderful time of the year”, to “Season’s Greetings”, to “Merry Christmas” , to “Happy Holidays” on the cover or inside the pages that bid you farewell at the end of the year.

As I was reading the grievance, I pondered on its validity. The person made a good point when expressing that Cornwall is predominantly a Christian society and that most people here do celebrate Christmas. She also was right to say that we shouldn’t eradicate the word “Christmas” from our pages simply to appease others. To her, this action is “not only unacceptable, but also highly offensive.”

I respect that person’s feelings.

As I read more and more of the letter, and as I came to her suggestion of using something along the lines of “Merry Christmas to All and For Those of You Who Do Not Celebrate Christmas, Happy Holidays”, I was even inclined to agree with the person. I’m a reasonable woman, and it was a small reasonable request.

But the last line killed my compassion.

“We look forward to seeing the new and revised caption in your paper this year and if not, we have all decided that we no longer wish to pick up a weekly issue”.

I find it admirable that someone would be so passionate about something that they are willing to do whatever it takes to be heard. It’s people like that who change the world and it’s hard to find anybody who stand for anything nowadays. But to use emotional warfare and threats of business withdrawal–in this case, readership withdrawal–on hard-working entrepreneurs to get them to do what you want is “not only unacceptable, but also highly offensive.” It’s a sure way to turn people against your cause, not for.

The Seeker has never pretended to be something it is not. It is secular. It has no political or religious affiliation. It has Muslim, Jewish, Atheist, and Anglican readers. Agnostics, Buddhists and Wiccans flip its pages each week. Young and old enjoy it. It gets the attention of Liberals, Conservatives, Neo-Democrats from the far left to the far right alike. I may personally be a leftist, and a believer in God, but although I express my views in these pages, I do not impose them on anyone. Yes, I do have strong opinions, but we clearly stipulate that The opinions and statements of our columnists are not to be presumed as the statements and opinions of The Seeker, and as such, as an entity, we do not take any position on controversial topics and we try to be politically correct when addressing our readers, all of them. We don’t side one way or the other.

The Seeker is a paper FOR EVERYONE and we like it that way. That being said, we never took the word “Christmas” intentionally out of the pages. It’s not like we banned it. We are usually always closed from before Christmas Eve to, many times, days into January, after Three Kings’ Day. Therefore, saying Happy Holidays simply made more sense. No need to see it as an attack on Christianity.

The Seeker is not taking a break this year so I do wish you, and yours, a very Merry Christmas and a Happy New Year. I also hope you have a Happy Holiday and send you my Season’s Greetings!  It is, afterall, the most wonderful time of the year!