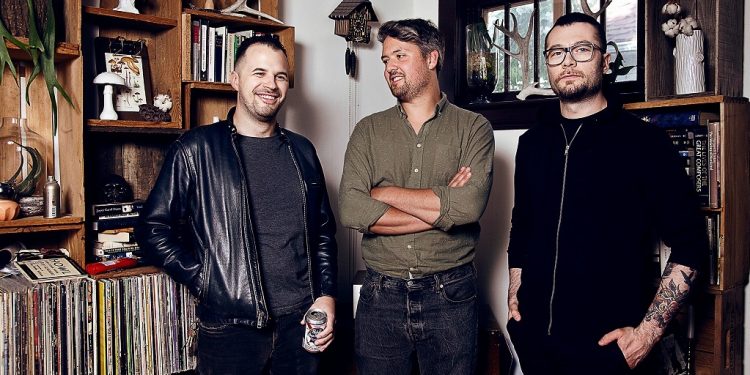 Counterfeit Jeans consists of Jed Gauthier (guitar and vocals), Spencer Heykants (bass), and Tyler Bedford (drums). The band is looking forward to playing BIG, and celebrating the cold of Alberta winter with some truly amazing talent.

“We were accepted into the festival just a few weeks ago. We’ve played Sled Island in Calgary a few times now and are really looking forward to playing BIG, which celebrates winter in Alberta right in the dead of it, which is pretty cool. Lots of great bands are playing this festival. We’re big fans of Canadian indie from the 90s so TUNS is going to be a lot of fun to watch. Lagwagon also rules so seeing Joey Cape do his solo thing will be rad,” said Counterfeit Jeans drummer Tyler Bedford.

Since forming in 2014, Counterfeit Jeans have been making a big splash in Alberta. The band has played Sled Island Music Fest, Up+Dt Music Fest, Bermuda Fest, and Golden West Fest. They have also played numerous shows with bands from across North America including: Speedy Ortiz; The Pack AD; Genders; Surf Dads; Radioactivity; The Wet Secrets; Moon King; Hurry Up; Faith Healer; I Hate Sex; Fury Things and many more.

Counterfeit Jeans was named one of Edmonton’s hidden gem bands on CBC in 2015; was on the “Best of 2015” list by the Edmonton Journal, and received two 2016 Edmonton Music Award nominations for Indie Rock Recording of the Year and Artist to Watch. In addition, The Counterfeit Jeans LP performed well on the campus radio charts ranking in the Top 50 nationally.

These early accolades were more than what drummer Tyler Bedford ever expected.

“The support we’ve seen since we first started has been much more than any of us ever anticipated. We do this for fun so even if one person likes it, we feel humbled. To have the level of kindness shown to us that we have, in an industry that’s not always so kind, feels pretty warm and fuzzy,” Bedford stated.

Although Counterfeit Jeans is a relatively new band, Tyler Bedford has known Spenser Heykants for about a decade. They worked together on previous projects before this band.

“Spencer and I have been friends and played in bands together on and off for about 10 years. Spencer and Jed had a band going a few years back and were starting a side project and they asked me to play drums for them. We clicked right away and here we are,” Bedford recollected.

The band has rehearsals regularly, and unlike previous projects that had more band members, being a three-piece band makes coordinating much easier.

“We practice at least twice a week, sometimes three times if we can swing it. Much easier coordinating in a three-piece band than the larger bands we used to play in. We always have fun in rehearsals. We beer jam about once a month. Those are always, and interesting,” stated Bedford.

In rehearsal Jed Gauthier comes up with a basic structure for a song, while Spencer Heykants and Tyler Bedford add their own parts.

“Jed usually comes to rehearsal with a loose structure and we all write our own parts from there,” said Bedford.

A common theme in some of their songs is sleep.

“Sleeping pops up as a theme in a few songs,” Bedford added.

Counterfeit Jeans, who have a low-fi sound, are sometimes compared to bands like Nirvana and Dinosaur Jr.

“We’re definitely fans of both Nirvana and Dinosaur Jr. and the comparisons are very kind, but we want to be seen as doing our own thing. Those bands can’t and should not be replicated,” insisted Bedford.

Members of Counterfeit Jeans enjoy the sound of their instruments, but they are not loyal to any one particular brand, and they are more than happy to gear-share at a concert.

“We aren’t really loyal to any set brand. We do like the sound we get out of the instruments we own, but do gear-share at shows sometimes to make things flow faster,” Bedford said.

Live in concert Counterfeit Jeans play a mix of newer and older songs, but they never play covers.

“We try to play a mix of songs off our EP, LP and new stuff each time we play. “No Desire” and “Gemini” and “Violence” are found most of the time in each set. We never play covers,” Bedford declared.

Counterfeit Jeans also acknowledged the support they recieed from their respective families and both their record labels. This has helped contribute to the band’s success.

“Definitely our families and our partners. They have to deal with us being busy a lot and are very supportive. Also the folks at both Broken Circles Records and Sometimes Music for their support”, Bedford concluded.

Calgary’s Big Winter Classic takes place over four days from January 19th to 22nd, at three venues, with five stages, and over sixty bands. The weekend pass is only $125. For more information on the event and how to get tickets visit the festivals official website.