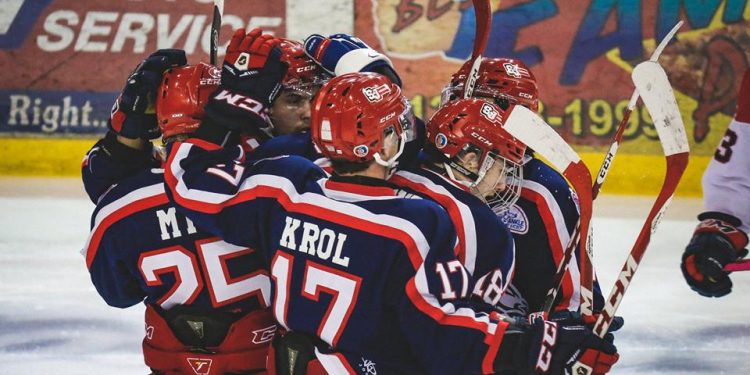 Cornwall Ontario – The Cornwall Colts built a 3-0 first period lead and went on to a 4-2 win in Kanata Friday night.

Ethan Mulhearn (5) paced the offence with a goal and an assist for the Colts. Dean Derouchie (14) and Brennan Markell (14) also scored. Justin McRae scored his first goal of the season. Shawn Baird chipped in with two assists.

Matthew Efros made 25 saves to earn the victory in goal as the Cornwall Colts improved to 27-12-2-3 for 59 points and sole possession of third overall in the CCHL. It was the Colts 10th win in their last 11 games

On Thursday Liam Lascelle made 30 saves to backstop the Colts to a 3-1 victory at the Ed Lumley Arena.

The game was highlighted by local author and cancer survivor Debra Lynn Bellefeuille dropping the puck for the ceremonial faceoff. The theme of the night was Pink in the Rink where fans were encouraged to wear pink in support of women’s cancer awareness.

Cornwall returns home for their final Sunday matinee of their regular season schedule when the Colts host Gloucester. Game time is 3pm. Following the game, fans of all ages are invited to Skate with the Colts. It’ll be an opportunity to meet and greet with the players as well as being able to skate alongside their favourite players.