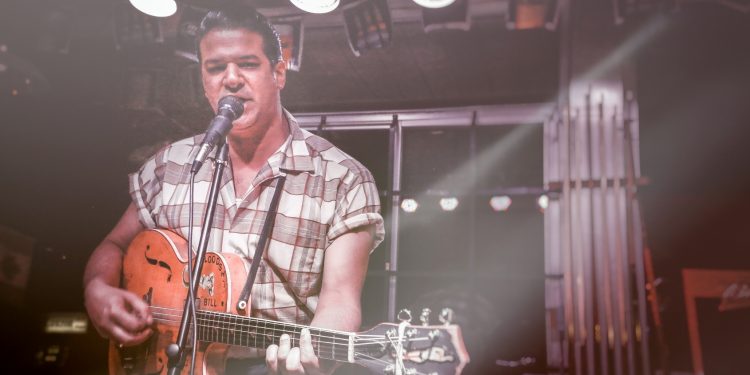 Cornwall Ontario – The one-man rockabilly band, Bloodshot Bill, is returning to Cornwall for a concert on Saturday, February 25th, 2017 at La Maison Tavern.

In addition to playing solo Bloodshot Bill has also played with a slew of bands such as The Hick-ups The Hubcaps, Guilloteens, Bootlegs, Pouteens, and Squirt.

The Montreal musician, with his iconic slicked grease hair, has been entertaining audiences since 1998.

“I’m not exactly sure what my image is, I just do what I like,” said Bloodshot Bill.” I am sure that I could put out a disco album and people would still call it “wild rockabilly” just because,” observed Bloodshot Bill.

Over the span of 19 years Bloodshot Bill has improved as a musician, but he still stays close to his musical roots.

In April 2016, his most recent release, “Guitar Boy” came out on Norton Records.

Bloodshot Bill has been in several films and documentaries, and his music has also appeared on compilation CDs such as the Cornwall Underground Vol.3 which was released in 2003.

His music is also available on music streaming services. Although he doesn’t make money having his music on those services, he is not against them. It is a way for people to hear his music. However the best way to support any musical artist including Bloodshot Bill, is to buy their album.

“I wouldn’t mind getting paid for that but I’m not against it yet. I personally don’t download stuff or use those sites (not for any moral purpose, just that I don’t!). I do check stuff out on Youtube. If I like something I will hunt it down and buy it! I think it’s a good way to discover new things, and it’s definitely quick! I think it all balances out somehow,” Bloodshot Bill hypothesized.

The concert on February 25th starts at 10pm, it is 19+, and admission is $10. La Maison Tavern is located at 900 Montreal Road in the east-end of Cornwall near the college.

Notice to Parents and Caretakers of Children from Dr. m. Dokiso Nchama