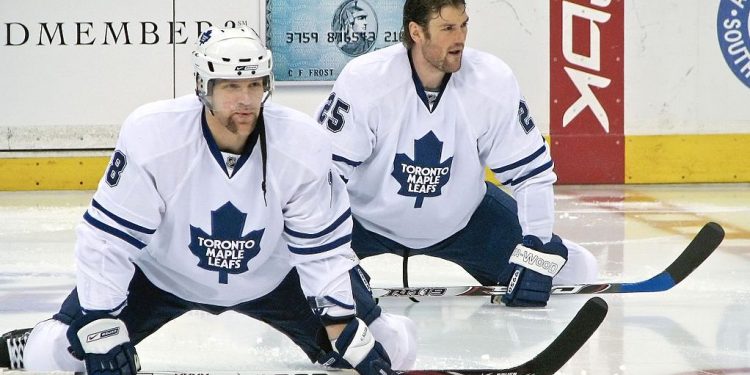 Cornwall Ontario – Chad Kilger will feel at home when he is behind the bench as an honorary coach for the CJHL Prospects Game which takes place Wednesday, January 25th at the Cornwall Civic Complex.

Chad Kilger and Jesse Winchester, both CJHL Cornwall Colts alumni and NHL alumni, will be serving as honorary coaches of Team East and Team West respectively.

NHL scouts will be in attendance for the contest which will feature 40 of the top NHL Draft eligible players from across the entire 10-league CJHL.

Playing in front of NHL scouts can be nerve-racking, and Chad Kilger can attest to that fact.

“I had the opportunity to play in a all-star game when I was in the OHL before I was drafted into the NHL. It was OHL players versus WHL and QHL players. I remember being very nervous. There were players that were already drafted into the NHL that were very helpful in trying to help me through the nerves. Paul Maurice was the coach and he was also very helpful,” said Chad Kilger.

Kilger’s experience as a player and coach will be a benefit to those selected to play the CJHL Prospects game.

“I coached my son when he played Novice and Atom. I really enjoyed teaching children about all the different skills that it takes to become a hockey player and seeing them improve throughout the season,” said Chad Kilger who is a father of three.

Kilger was averaging a point-per-game playing with the Cornwall Colts of the CJHL in the 1992-1993 season. He gained experience and learned a lot about the game playing Jr. A. That prepared him for playing in the OHL, and later in the AHL. He averaged about a point a game in both of those leagues too.

“Having the chance to play Jr. A for the Colts gave me the chance to play against older, stronger, faster and smarter players. I tried to take advantage of the opportunity to get better and to learn from all of my teammates,” stated Chad Kilger.

Most top prospects dream of getting drafted and playing in the NHL. In 1995 Chad Kilger experienced that dream. His speed and size impressed scouts and he was drafted by the Anaheim Ducks. He vividly remembers the experience of the draft and being selected fourth overall.

“Getting drafted was an exciting experience. I had tremendous support from my family, and 15 members traveled out to Edmonton. I remember being very excited. The LA Kings had the third pick and their draft table was right in front of where we were seated. Before their pick many people at the table turned around and looked up to where I was sitting. Oh my God, I may get drafted and have a chance to play with Wayne Gretzky I thought. The Kings picked Aki Berg who was sitting right in front of me. At that point I felt pretty confident that Anaheim was going to select me. I had several meetings with the Ducks before the draft and things seemed to really go well. The Ducks selected me 4th overall. Wow, I now know where I will have the chance to play in the NHL. The rest of the day was meeting many news people, taking photos and attending a post draft gathering that the Ducks hosted for all of their draft picks,” Chad Kilger had recollected.

Kilger played 12 seasons in the NHL including stops in Anaheim, Winnipeg/Phoenix, Chicago, Edmonton, Montreal and Toronto.

Millions of young Canadian boys over the last century have dreamed of wearing the uniform of the Montreal Canadiens or the Toronto Maple Leafs. Chad Kilger had the opportunity to play for both historic NHL franchises.

“I will always be very grateful of having the opportunity to play for such historic and local franchises. To be part of these franchises and have to chances to meet and talk to some of their greatest players in the history of hockey was amazing,” added Chad Kilger.

In addition to collecting over 200 points, Chad Kilger also had the notoriety of having the hardest shot in the NHL. The Hockey Hall of Fame acknowledged Kilger’s 106.6 MPH shot in 2006 by putting his stick on display at the Hall of Fame. Now the record for hardest shot is held by Zdeno Chara at 108.8 MPH. Shea Weber also surpassed Kilger and came close to matching Chara’s mark at the 2015 All-Star game with a shot clocking in at 108.5 MPH.

After retiring from the NHL in 2007-2008, Chad Kilger returned to Cornwall and became a firefighter. Being home brings back a lot of memories for Kilger such as attending Cornwall Royals hockey games in his youth.

“Growing up I attended many Royals game. I was sad to see them leave, but that gave me the opportunity to play Tier 2 at home for the Colts. Hockey in Cornwall seems to be in going very well,” Kilger recollected.

Kilger is also impressed with the current hockey climate in Cornwall, such as the recent World Junior’s Exhibition game that took place here before Christmas.

“On the heels of the World Junior exhibition game, Cornwall is once again on the hockey map for events,” concluded Chad Kilger.

Tickets for the CJHL Prospects Game are now on sale at the Cornwall Civic Complex box office from 8:30am to 4:30pm – Monday to Friday. Call 613-938-9400 or by e-mail contact David Murphy here – [email protected]

Who is the mysterious Benefactor buying Free Coffees for Cornwall Locals?