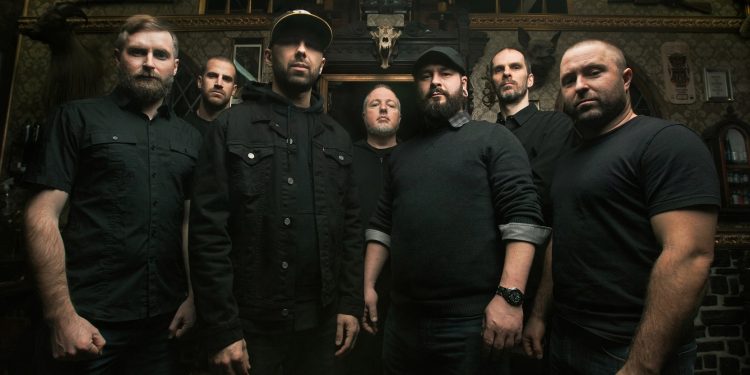 Despised Icon, who are on Nuclear Records, have released an exciting new album titled “Beast”, and they are going on tour for the first time since 2010. This includes a gig at Barrymore’s in Ottawa on March 18th.

The band has gone through various phases since 2002, and according to lead singer Alex Erian the album “Beast” represents the best of those various phases. From dual vocals, to shredding, to brute force – the new album is simply epic.

“We have gone through all sorts of phases being in a band for so long. We started out in 2002, with Beast being our fifth record. We’ve always been a deathcore or modern metal band or whatever. That is the bulk of our sound. We’ve gone through different phases and I feel like Beast is the best of those various phases. The result of that is a record that is a bit more diverse than some of our previous efforts as far as I am concerned,” said vocalist Alex Erian.

Despised Icon released a music video for the title song “Beast” – where the concept of a beast is a metaphor for the band. The music video itself is a bit artsy and out of focus and creates interesting imagery. One thing is clear though, the beast has reawakened.

“Essentially the ‘Beast’ itself is just a metaphor in a way for the band. We broke up in 2010, and re-banded in 2016. Essentially the Beast is just the band that laid dormant for a while and resurfaces and reemerges, and slowly picking up where it left off. The concept behind the Beast video, well it’s very blurry and it’s a bit more artistic. We just wanted every shot to be more suggestive than Hollywood in your face effects. You sort of see the beast but it leaves a lot of room for your imagination and interpretation so you can see the beast with your own imagination. We tried to go a little artsy there,” said Erian.

A few of Alex Erian’s favourite songs off the album are ‘Inner Demons’ and ‘Bad Vibes’.

“We have songs like ‘Inner Demons’ that are technical death metal oriented. ‘Inner Demons’ would be one of my favourite ones both musically and lyrically. If you want to groove more, just simplified slammy rifts, ‘Bad Vibes’ would be another song that I am definitely into as well on the new record,” stated Erian.

Another interesting song off the new album is ‘Grind Forever’. The lyrics discuss the grind of being in a band, but not getting discouraged, and over coming adversity. The title of that track is also a wink to the drummer who use to write ‘grind forever’ on internet messages boards back in the day.

“We are self-managed and we have always been very DIY. A lot of people see being in a band as fun and games but there is a lot of work involved and Grind Forever is a metaphor for that. We are on a constant grind and we are working hard for our art and for life in general. It was just a fast upbeat song so we felt the theme was suitable to the song tempo. Essentially it is just about moving forward, working hard, facing those obstacles, and not getting discouraged. No matter what happens, no matter what people say, just keep on keeping on. My drummer and I, we all go way back. We’ve all known each other for fifteen years. My drummer use to go on message boards, and he wanted to be the fastest drummer, he listened to a lot of Cryptopsy and all that. He would always post Grind Forever and would always grind fast on his drums, so that was sort of a wink to Alex Pelletier,” reflected Erian.

Alex Erian faced a (grind) difficult challenge before recording the album “Beast”. He had a lung infection and lost his voice right before going into the studio.

“The challenge for me personally was going into the studio. My girlfriend and I moved into a new apartment and there was extensive water damage when we moved in. Both us and our landlord wasn’t aware of, so I got a lung infection. I had to take antibiotics and the asthma treatment I was taking – so I lost my voice right before going into the studio. Being in another band, who’s based in Ottawa, Obey the Brave – we were about to leave for Asia and I had a strict deadline for recording the record before leaving for tour otherwise we’d miss our deadline for recording the album. It was challenging getting the record done with that lack of voice. It took a little bit of extra time, but we made it happen,” reminisced Erian.

In 2010, when Despised Icon announced that they were disbanding, it was because members were starting families. Now that they have reunited, and are touring part time, it is because of the support of their families who want them to pursue their passion and music careers.

“I received a lot of support from my family. No matter what I do, I always know that they are there to encourage me even though it is an alternative lifestyle and not the most lucrative of careers. They have been very supportive. The last three years, being with my girlfriend for all this time, she’s definitely witnessed the ups and downs and she’s been there for the good and the bad. She’s definitely helped me see clearly when things are not so encouraging. It’s hard being a musician, so I would say my parents and my girlfriend have been the most supportive,” disclosed Erian.

Alex Erian also feels fortunate that Despised Icon has such amazing fans, including a quarter million on Facebook, who want to hear new material and not just the classics.

“We broke up for six years and a lot of bands sort of get forgotten in that span of time. For some reason we still have fans, now more than ever. Our fifth record Beast just sold more opening week than all our previous efforts. For fans to be this receptive to our new material even though our band is sixteen years old. Often when you’re a band for so long fans want to hear your ‘Rest in Peace’ or your ‘Black Album’ and they sort of don’t care about the new stuff. They are still supportive so it’s quite encouraging for a band like us to get that much support. Our band understands and realizes what our reality is and that we can no longer tour full time even though we are back to being an active band, said Erian.

For Despised Icon fans in Ottawa this upcoming North American Tour is extra special, because this is going to be their first show in the Nations Capital in seven year.

“Every show is more of an actual event now. If we play your town, you might as well show up, because it could be a couple more years before we come back. That’s been the general vibe so far. This upcoming tour we are playing a lot of markets for the first time since we disbanded. Ottawa is no exception. The last time we played Ottawa was in 2010. It was a great show, and it was a sold out show. We haven’t been back since, so we’re definitely eager to come back your way,” added Erian.

The band built their fan base through heavy touring with bands like Cryptopsy, Suffocation, Immolation, Deicide, Morbid Angel, Behemoth, Hatebreed and Napalm Death. Now they are set to embark on their 2017 World Tour.

Despised Icon, Carnifex, Fallujah, Rings Of Saturn and Lorna Shore play Barrymore’s Music Hall on March 18th, 2017. The show is 19+, doors are at 7pm, and advance tickets are $30. Tickets are on sale at Vertigo Records, Compact Music, The Odds and Sods, Shoppe, and online. This event is brought to you by Chord Productions and The Diamond Mine Agency.