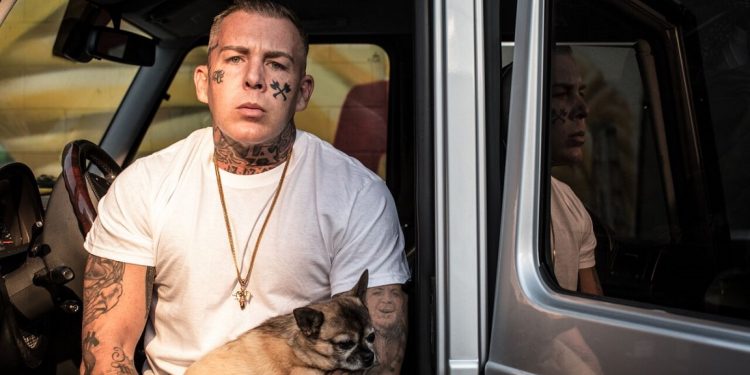 Cornwall Ontario – Madchild, a member of the once insanely popular hip hop group Swollen Members, is touring Ontario this January as a part of his Canadian Tour. Adorned in ink and spitting sick rhymes, the talented rapper is playing live January 11th in Kingston at the Overtime Sports Bar. The next night, on January 12th, he is performing in Ottawa at the Bourbon Room. He is also coming to Cornwall Ontario on January 24th with a gig at  La Maison Tavern – just some of his many tour dates.

Madchild’s new album, entitled “The Darkest Hour”, is coming out March 10th. It will feature production by Evidence. His producer is a member of the legendary underground Los Angeles hip hop group Dilated Peoples – a group whom collaborated with the likes of Kanye West.

“The Darkest Hour” represents Madchild’s most mature work to date. It pushes boundaries lyrically and shows his development as an artist.

“The new album features production by Evidence. He’s an artist from a group called Dilated Peoples. He’s always been one of my favourite rappers, and one of my favourite producers. He’s also a friend of mine. It was a really cool experience making that album. I think it was my most mature album. From a hip hop purist stand point, it’s just a raw, real, hip hop album. There are moments of being vulnerable and just complete honesty throughout the album. There are a lot of times when I am pushing things lyrically, which is something that has always been really important to me because it’s my craft,” said Madchild.

The fondest memory Madchild has at the Juno’s was in 2003 when Shania Twain hosted the event.

“My fondest memory at the Juno’s was probably the year Shania Twain was there in 2003. She made a joke. She sat on one of our laps and said, ‘oh, I almost sat on a swollen member’, I thought that was pretty funny. I remember it being a fun year. That was Avril Lavigne’s second year of blowing up (she won four Juno’s and was nominated for two more that year). Also meeting Michael Buble, the last one I went to, he is a cool guy. It was kind of cool to meet him. I have a lot of respect for him as an artist,” Madchild reminisced.

In addition to winning four Juno Awards, Swollen Members also won five MuchMusic Video Awards between 2002 and 2003. They also had songs on the Billboard charts including “Beautiful Death Machine” which ranked #3 in Canada and #3 on the US Top Heatseekers chart, and they have albums that went platinum and gold. These accolades are important for Madchild but the real accomplishment is to still be relevant to fans after all these years.

“I’ve had a long career now. I think just to be relevant with kids after being an OG and veteran in this game is an accomplishment in itself. You want to be able to look back at your whole body of work and be proud of it as a whole. Winning four Juno’s, platinum records, five Much Music awards, however many Top Ten hits we had. It all helps build it up, and when you look back be proud of what you accomplished in your life. I also don’t want to live in the past.

I keep wanting to move forward. So when I started my solo career, although times have changed, and of course the whole dynamic of selling music is different. Still reaching up to #3 on the Billboard charts, every time I put out an album, that’s like a real honour to me. Coming back without having a really big machine behind me, just being able to reach those numbers just from loyalty of fans and those who support me, support my music, that an incredible feeling, and I think just the experience of doing shows, whether it’s 400 people or 4000 people, it doesn’t really matter. It’s when I get to meet the fans afterwords, they share what my music means to them, it is very rewarding. I think that is what keeps me going,” stated Madchild.

Madchild’s favourite Swollen Members songs include Night Vision, and some of the early hits like Fuel Injected and Lady Venom.

“I’m especially proud of Night Vision. It’s a song we did more recently as the collective of Swollen Members. That one did well on YouTube. When Swollen Members had big hits, there wasn’t YouTube yet, so I can’t imagine how big those songs would have been on YouTube back then. Night Vision was a cool song, I liked that one. I’m very proud of songs like Fuel Injected and Lady Venom, because those were our first hits. Those were the spring board for the five year wave of success that we rode which was an incredible experience,” said Madchild.

One of his favourite Madchild songs is “Write It Down” off the new album. The music video is on Youtube where Madchild already has over 30 million combined plays for all his videos.

In 2012 Madchild started releasing solo albums. His last album Silver Tongue Devil debuted at #3 on the Canadian Billboard Charts and on the Billboard Top 200 in America.

Since going solo he also participated in a few rap battles.

Madchild competed in the largest rap battle in the world through King of The Dot Entertainment’s Black Out 5 where he battled against well known battle rapper Daylyt (pronounced Daylight). It was a great experience for Madchild, although it was hard to prepare for a rap battle while extensively touring at the same time.

“I’m not a battle rapper, so haha, I just kind of winged it. The one thing I can tell you about that is I was doing twenty seven shows that month. A lot of battle rappers, when they are getting ready for a battle, that is all they are focused on. You need to be able to say it forwards and backwards. You need to be able to breath it, you need to know it that well. It’s a very different dynamic than doing a live performance on stage, which is what I’m use to doing every show. You really need to know when to stop, when the crowd reacts to keep going. There is a lot I could learn still if I was to continue battle rapping. I think I did a great job that being only my second or third battle done in my life.

These guys are the best in the world. If I hadn’t stumbled a few times I think I would have totally taken that battle. Like I said, I was doing 27 shows that month. After that battle, I actually had to run out to the back alley, jump into an SUV, and drive two hours in a snow storm to make my show. I made my show right on time. If I was going to battle again, I would definitely take time off touring so I could properly prepare. It definitely takes a lot of preparation. I was walking around my hotels at night, after my shows, trying to come up with ideas. I’m really happy with what I came up with in the amount of time that I had and how busy I was. I think I could do a lot better if I had nothing else on my plate,” Madchild had reflected.

In addition to writing music and touring, and running a new clothing line, Madchild also started the Battle Axe Warriors – a movement that has done a lot of good around the world.

“It’s just an idea I came-up with, when I got out of a dark situation I was in, and I decided to be a solo rapper. The idea was being able to join a family, a collective, with other artists, and people who are just fans of music and underground hip hop – who just have a positive mental attitude. It has just morphed into its own thing now. I’m not always fully active in it, but I’m proud to rep it, and I’m proud of what it has become. As far as the positive things people do all over the world. There are 72 divisions around the world. These guys do Toys for Tots Christmas, food for families, charities, and do clothing drives. It’s pretty incredible. I’m happy that it is such a positive thing. I’m busy with touring and recording, and I started a new clothing line called Upset. I’m really busy with all that stuff but I always take time at the shows to say hi to people who are Battle Axe Warriors and hang out with them. It’s cool to see them all over the world from Norway to Colorado to Winnipeg. There are Warriors every where,” said Madchild.

Madchild has a message for his fans coming to see him live in concert. He states that life is short, so do what you love to do. It’s sound advice.

“Life is short, make sure you love what you do. Thank you to everyone who has supported my music, continues to support me. It means a lot, because without them, I’d just be making music in my apartment. Fans are everything, when people support your music, especially in this over saturated world that we live in today. It’s a real honour to be able to tour the world and fill clubs all over the world. I think it’s real important that you love what you do. I think it’s one of the most important things in life. If you get up every day and you hate your job, that’s not a healthy thing, that’s not a good thing. You have to find what you love,” concluded Madchild.

The Diamond Mine Agency is bringing Swollen Members own Madchild to Kingston and Ottawa. Madchild plays Kingston on January 11th at the Overtime Sports park. Tickets are available online at Ticketscene.ca. Tickets for Kingston are also available at the 710 Smoke Shop, Ink Well, Brian’s Record Option and Sunrise Records.