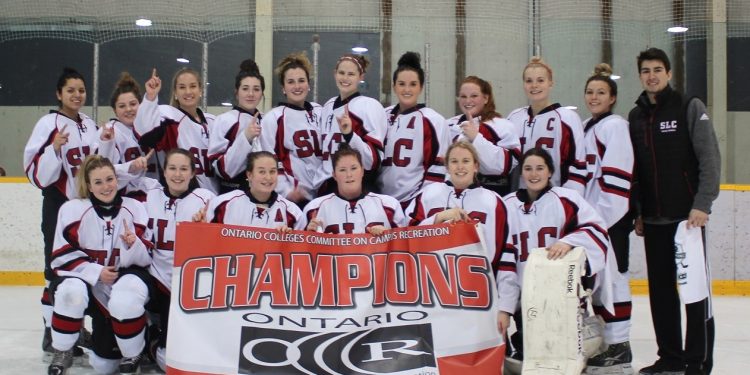 Lindsay Ontario – Usually the SLC-Cornwall Sharks women’s team close out the year with the Fleming College Invitational but this year it’s the first tournament of the year for the program.

Last year, the Sharks cleaned up at the Fleming Invitational by going a perfect 4-0 winning the Championship game over the host Fleming Knights and only allowed two goals against all tournament.

This year, the Sharks only have a handful of returning players but are surrounded by a talented rookie group.

In the finals the Sharks faced off against Durham College.

Jenna Cholette scored her first goal as a Shark on a shot from the point just 20 seconds in but DC/UOIT tied the game just a few minutes later.

With their opponent starting to pick up the momentum, the Sharks would go on three straight power-plays with Simpson scoring on the third SLC man advantage to retake the lead. Kate Goody added one more just before the buzzer to take a 3-1 lead into the second period.

After a scoreless second period, a harmless looking shot from Goody beat the DC/UOIT goalie to make it 4-1. The goal deflated the opposition and when Dazé scored on a great solo effort, the celebration was on for the Sharks, winning the Fleming College Invitational for the third consecutive year.

“It didn’t take long for the chemistry to build with the girls. They didn’t panic when we got behind on the scoreboard.”

The Sharks are back on the ice in Ottawa on February 2nd for the La Cité Collégiale Invitational.

Knitting Purple Tuques for a Good Cause