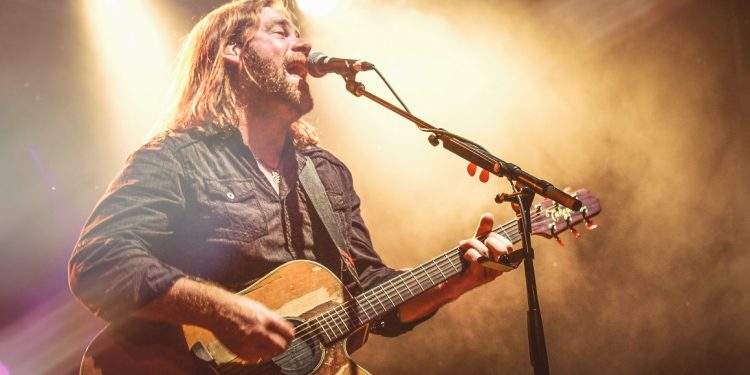 For twenty years Alan Doyle was the lead vocalist and guitarist for the legendary Canadian folk rock band Great Big Sea. His fondest memory with Great Big Sea was a kinesthetic one, the day he held a copy of the bands very first CD.

“My fondest memory? August 3rd, 1993. The day our first CD showed up. I’ve played in bands my whole life, and I always thought for whatever reason, as long as I got a record out, then it would legitimize my whole life in some kind of way. When that little indie record showed up on that day it was one of the proudest moments of my life. I couldn’t believe there was something permanent – a permanent record of our music. It was a brilliant day,” Alan Doyle reminisced.

Over the next twenty years, the beloved sea shanty band would tour the world entertaining crowds with their energetic and high spirited performances.

In 2013 Great Big Sea had their 20th anniversary tour which included a date in Cornwall Ontario where Alan Doyle had an impromptu and memorable solo performance at a swimming tournament next door.

“Great Big Sea was playing the hockey rink and there was a kids swimming tournament going on in the swimming pool next door and one of the parents asked me to sing the national anthem and I did. It was such a great time,” said Alan Doyle.

Alan Doyle still keeps in touch with Sean McCann, Bob Hallet, and Darrell Power. However he doesn’t see Sean as much as he used to since he has moved to Ottawa.

“Of course (we’re still friends). Sean, Bob, Darryl, and myself still own the publishing. Sean doesn’t live in Newfoundland anymore. We don’t talk as much as we once did, but he seems to be doing really well and great, and good luck to him,” said Alan Doyle.

Is it possible that Alan Doyle and The Beautiful Gypsies could one day tour with Sean McCann?

Alan Doyle met Sean McCann, Bob Hallet, and Darrell Power while attending University. He graduated with a Bachelor of Arts degree in English at Memorial University of Newfoundland.

Studying literature helped Alan Doyle with his lyrical writing, however the oral tradition of Newfoundland and Labrador was a much larger influence for him.

“I loved how some of the great writers used language. From Shakespeare to modern guys, the way they can turn a phrase. I got to read a lot of that stuff while doing an English degree, a lot of books I wouldn’t have read otherwise. That was undeniably an effect, but I think it’s probably small compared to the oral tradition of Newfoundland and Labrador. That’s by far the biggest influence in trying to tell stories and writing songs,” Alan Doyle responded.

Alan Doyle is working on a third solo album. He recorded it in January with a legendary record producer.

“I have a third solo album in the can as they say. I recorded in January with the Beautiful Gypsies and with producer Bob Rock out in Vancouver. It’s a real fun live collection of songs that we recorded in the studio mostly live right off the floor. I can’t wait for people to hear them. It’s going to be really fun energetic record,” Alan Doyle stated.

Bob Rock has produced music for bands such as The Tragically Hip, Aerosmith, Bon Jovi, Mötley Crüe, Metallica, Our Lady Peace, Bryan Adams, and many others.

Will the new album be a Juno contender in 2018? Only time will tell. Alan Doyle has had many Juno nominations, but he has never won a Juno Award before.  Is winning a Juno important?

“Yes! Haha, seriously. I would love to win a Juno Award. I’ve been nominated a lot, but never won one. I would just love to take Juno nominee off my resume, but I’m grateful to be in the club at all,” Alan Doyle disclosed.

Alan Doyle has also collaborated with Russell Crowe on several occasions. Doyle and Crowe were both in the 2010 blockbuster movie Ridley Scott’s Robin Hood. They both appeared on the CBC series Republic of Doyle. Alan Doyle also helped produce a music album by Crowe and helped co-write some of the songs. Working along side Russell Crowe was inspirational according to Alan Doyle.

“Inspirational, he’s the hardest working guy in show biz. It’s fantastic to see how a guy at his level still values the craft of acting, and song writing, and story telling. He’s so passionate about everything he does. It’s a real honest to God inspiration,” Alan Doyle stated.

Alan Doyle and The Beautiful Gypsies have five dates in Southern Ontario: March 28th at Academy Theatre in Lindsay Ontario, March 29th at the Centre in Square in Kitchener, March 30th at the Charles W. Stockey Centre in Perry Sound, March 31st at the Concert Hall in Toronto, and April 1st at the Empire Theatre in Belleville. For shows times and to purchase tickets visit Alan Doyle’s website.

Alan Doyle feels fortunate to be returning to Southern Ontario on this tour. He finds that it is a wonderful and accepting place.

“I’m so lucky, since the very first time Great Big Sea came to Southern Ontario. The first thing I’d like to say to people is that I’m so grateful to be able to still come and play concerts. The second thing I’d like to say is that Southern Ontario is one the places with the most open arms for different parts of Canada. No matter what region of Canada you might come from – whether it’s the far east or the high north everyone is welcomed there and you have a chance to win people’s attention. It’s so awesome that anythings possible,” Alan Doyle concluded.

OCSTA Together in Faith Campaign