La Maison Tavern… Not your grandaddy’s bar! Or was it! 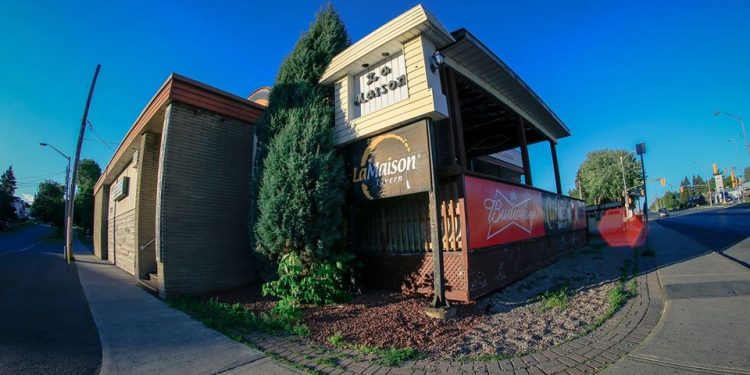 Cornwall Ontario – Since the mid-thirties, La Maison Tavern has been a place where Cornwallites go to take a load off.  For over seventy years, it was the gathering place for employees of the several industrial plants in town after a hard day’s work.  It is the bar where all the locals go wet their whistle.  A landmark in the area, La Maison–Home, if you translate it–is full of history.  Everybody has a La Maison story.

Rumour has it that at one time or another, La Maison was more than a Tavern.  It was, allegedly, stage to a brothel, host to a downstairs after hours illegal gambling club and even believed to have once, long ago, received a visit from Elvis Presley himself!  Today, it is part of our fabric, always there, sitting proudly on the same corner as ever, like a good ol’ security blanket.

When Ron Edwards and Mia Park purchased “La Maison” a few months ago, they knew exactly what they wanted it to be: the same, but better!  They also really wanted to make sure the years of the past would not be forgotten.

A lot of changes are coming, but the essence of the place will remain.  Some of the old tables will become wall hangings. If ever you have carved your name over your dad’s or your grandaddy’s name on one of them, it will be commemorated.  Old historical pictures of the area will also cover the walls. The old sign with the so easily recognizable shamrock will become the main center table.

The building will get a facelift too. A grant from Heart Of The City will help restore the building to its vintage 1935 look.  The bathrooms will be renovated and the far end corner, where the sound booth presently stands, will become a private room. Labatt and Budweiser are behind the couple in a big way.  “They’re building the whole back bar. That will be the Budweiser Corner.  It’s gonna be the hot spot in the bar where right now it’s the dead spot,” said Edwards.

He continued:  “What we’re trying to do is attract the people who used to come here, the ones who have really good memories of this place”.  “We go around asking people if they know La Maison and it’s funny to hear them say the last time they were here was 20 years ago.  These are the people we want back,” his wife, Mia, ended.

The couple plans on bringing back pool and dart leagues. Already, they’ve invested in a high-end pool table.  “It’s the best pool table in Cornwall.  We want it to be a real Community bar,” Edwards stated.  Finger foods will be served and a few Arcade Machines will be brought in to be appeal to College Students.  On the menu, you will find Chicken wings, fries, onion rings, nuggets, pierogies and samosas.

Music wise, we will see a variety of bands, acts and specialty nights to cater to all tastes in music… “We have good connections.  For example, Rick St.Pierre helped us getting a band here, they’re called Annihilator.  It’s a Big Deal. The tickets will be sold out in minutes because 60,000 people would go and pay $200 to see that band.  They will see them here for $30-40 bucks and the seating is limited to 210.  It’s a small intimate venue… There are certain clubs where those type of bands like to go play unannounced.  There is one in Toronto, one in Montreal, one in Ottawa… VIPs only.  We want that. We are investing a ton of money in the sound system because we realize that no matter how beautiful the venue is, if it sounds bad, they’re not coming back.”

The couple, who is from Montreal and owns another bar in Dorval, is not only investing in Cornwall, but also relocating. Edwards concluded: “It’s a work in progress.  It’s a big dream and I know we can do it.  We’ve done it on a smaller scale before. This is basically Duffy’s (their Montreal bar) on Steroids”.

They already bought a house in Cornwall and registered their daughter for school.