by Editorial Board
in Leisure & Lifestyle, News and Announcements
Reading Time: 3 mins read
35 2 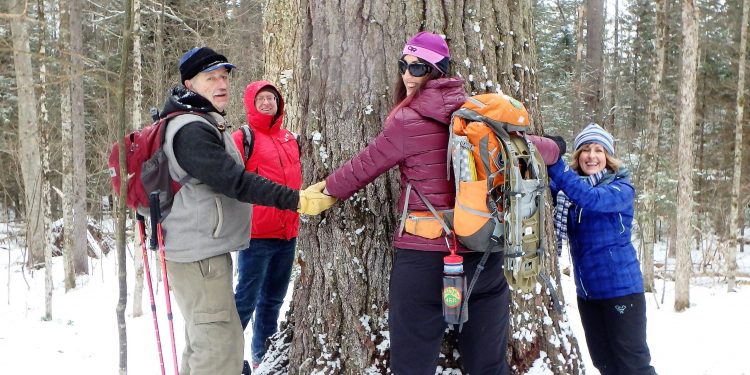 Over three centuries ago in a forest deep within the Adirondacks, tiny seedlings gingerly sprouted undetected.  Happily for them they flourished in an area protected from harsh winds and the axe of the mighty lumberjacks.  This stroke of luck helped them thrive and eventually grow up to be giant white pines.

But don’t think that their size would make them easy to find.  In fact, if ever there was a secret garden, then Elders Grove is it.  We’ve been here before and we’ve also missed it several times.  There are no signs pointing out this special forest, no markers to identify the gate from the road, and only but a few misleading clues to point hikers to the trailhead from the field.  It doesn’t stand out as anything but a very ordinary forest, but we know that it is a hidden gem with reputable monoliths at its center.   Fortunately there are snowshoe tracks to help us today and we choose what appears to be the most worn path, which is not saying much, as there is little traffic here.  Sometimes the trail is faint or splits and we must pay attention to stay on track.

When we spot our first elder we form a ring around its massive girth, at first in awe, and then as a way of gauging the size of its trunk.  We determine this measurement to be five links of a friendship chain.  This impressive tree has earned our respect. Three hundred year-olds are hard to find!  When we leave it behind we feel dwarfed, like pixies among giants in a Hans Christian Andersen fairy tale.

The meandering trail eventually leads us to another tree, this one reported to be the tallest in the grove, its estimated height reaching one hundred and fifty feet. By craning our necks, we can glimpse its crown piercing above the lower canopy.  What sort of wizardry is this that would make a tree grow from a seed to the proportion of Jack‘s famous beanstalk?  Its rarity makes it surreal.  How does one explain why this towering tree survived while its brothers succumbed to wind damage or maybe even a bolt of lightning?

A little distance away, one such casualty makes us pause.   The felled tree stretches horizontally across the forest floor before disappearing into the undergrowth.  Only by walking along its length can we truly grasp its expanse.  The complexity of its upended root system transforms it into an interlaced three dimensional tapestry. It is a majestic work of art of approximately twelve feet in circumference.  While beautiful, it is also a sad reminder that in less than a century from now the remaining elders will have vanished.

We eventually come across another rare sight, this time a younger pine intertwined with a white birch.  The contrast between the two mismatched trees is striking.    The stronger pine surrounded by its extended family appears to have taken on the role of protector to its more delicate partner. Inseparable, they certainly seem destined for the happily ever after.

Although we are captivated by the timelessness of this grove, we must break the spell of this mystical place and return to our busy lives.  My story may be done, but the story of this enchanted forest will go on for as long as the white pines stand tall in the grove somewhere deep within the Adirondack mountains.

From my pantry : Flavourful roasted vegetables