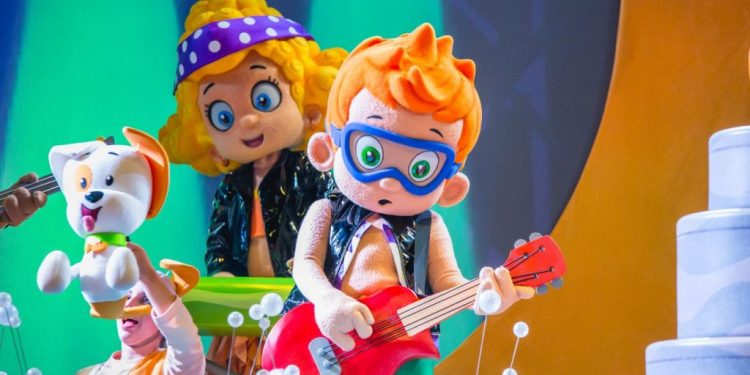 Cornwall, Ontario –  Koba Entertainment and Nickelodeon are proud to announce their continued partnership with the live theatrical production of Bubble Guppies Live! Ready to Rock. Based on Nickelodeon’s hit TV show, the live tour will visit Cornwall, at Aultsville Theatre on April 25.

Tour information and ticket details will be available through www.BubbleGuppiesOnTour.com.

The Emmy award-winning property, Bubble Guppies, is a top-rated television show that teaches kids about a wide range of topics – from dinosaurs to dentists, rock and roll to recycling, and colors to cowboys. Molly, Gil and their fishtailed classmates learn about the world around them through playful investigation.

“Put on your water-wings and get ready to dive into a swimsational musical underwater adventure,” says Patti Caplette, artistic director of the live show. Koba Entertainment has assembled an all-star team, including Bubble Guppies creators and writers Jonny Belt and Robert Skull, to bring this show to the live stage, “We’ve created a totally awesome production for everyone to rock out with the Bubble Guppies, but first they’re going to have to solve the mystery of the missing band member,” says Caplette.

When the Bubble Guppies are getting ready to rock n’ roll with everyone’s favourite tunes, a special band member goes missing and the show can’t go on! With help from Mr. Grouper and giggly little fish, Molly, Gil and the whole gang embark on a musical expedition as they search every corner of their bubbly world for their friend. Featuring music, comedy, and audience participation, the Bubble Guppies will have to leave no stone left unturned and no bubble left un-popped in order to get the show on the road.