Interview with Sean Gunn – Gilmore Girls and Guardians of the Galaxy 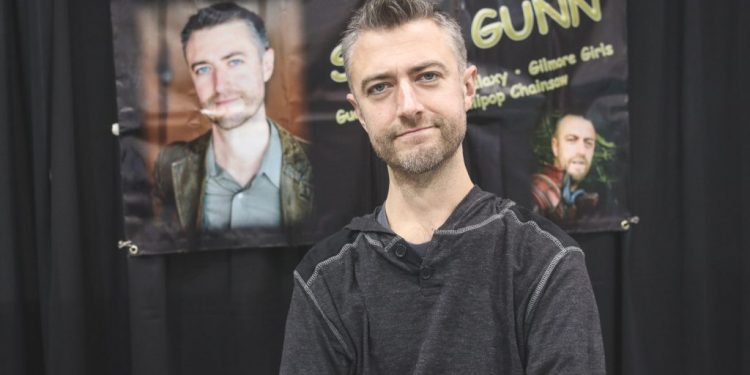 Cornwall Ontario – St. Louis, Missouri born actor Sean Gunn, famous for his roles in the television show Gilmore Girls and the movie Guardians of the Galaxy, will be a special guest at The Cornwall & Area Pop Event (CAPE) this April 22nd and 23rd, 2017.

“Well, I essentially created the role myself. When I was cast on the show originally, it was just for a one-day costar role as the “DSL Installer”. Amy Sherman Palladino, the creator of the show, liked what I did enough to keep asking me back and eventually it turned into a regular job. As for whether I’m a quirky person in real life, I have no idea. Isn’t everyone? I guess I can say that I don’t think Kirk I are terribly similar, even though he does come out of my psyche somehow, so there’s that,” said Sean Gunn.

The actor was happy to reprise his role in the 2016 four-part Netflix series “Gilmore Girls: A Year in the Life”. Five minutes into the first episode the character of Kirk introduces the world to his Ooober taxi service (not to be confused with Uber).

“I liked the new series a great deal. As an actor, to be able to perform really well-written scripts is rare, and it’s a gift. So I’m grateful. I really enjoy playing Kirk, and it was nice to slip into that skin again. Seeing all the actors, many of whom I’d not seen in a while, was one of the best parts of the experience,” Sean Gunn disclosed.

Sean Gunn also played the character of Kraglin in Guardians of the Galaxy, and he will be reprising that role in the sequel which comes out on April 25th. The original film stars Chris Pratt, Vin Diesel, and Bradley Cooper. The movie is about a group of intergalactic criminals who must work together to save the Universe. Sean Gunn describes his favourite scene in the movie as Kraglin.

“My favorite scene was when I got to shout “Cap’ns gotta teach stuff!” to the rest of the Ravager crew. I’m very excited to share the second movie with an audience. I know it’s going to be great, and I have an expanded role as well,” Sean Gunn stated.

In addition to Guardians of the Galaxy Vol.2, Sean Gunn’s character of Kraglin is also scheduled to appear in the 2018 release “Avengers: Infinity War”.

Sean Gunn’s resume also includes roles on TV shows like Bones, Glee, Angel, and Third Rock from the Sun; as well as movies like Super and Pearl Harbor.

In 1996 Sean Gunn completed his education at DePaul University where he earned his Bachelor of Fine Arts in Acting.

“I have pretty much always been an actor. From the time I was old enough to know what a profession was, it was the one I wanted. My whole life has been geared toward it,” Sean Gunn reflected.

When Sean Gunn prepares for a new roles, he focuses on learning the lines first with no performance attached to it.

“When I prepare for a new role I begin by learning my lines cold, in a neutral fashion with no performance added on. Then I slowly construct the circumstances from my character’s point of view–where is he coming from, where is he going, why is he there. I like to know what he’s thinking about when he’s not speaking. Once I feel like I’m thinking in character, the lines flow naturally,” Sean Gunn recaled.

In 1999 and 2000 Sean Gunn played two different characters on the television show Angel – a spin-off of Buffy the Vampire Slayer. His lasting memory of appearing on that show was the grueling make-up sessions.

“Gosh, that was some time ago. I remember that makeup took a long while–at least 3 hours. And I had to wear contacts, which I’d never done. It was whirlwind. The second time I did the show the main thing I remember is that I had cut myself shaving–badly–a couple of days before we shot and I had an ugly scab over my lip. It was embarrassing and took a lot of makeup to cover,” Sean Gunn reminisced.

Angel’s creator Joss Whedon named one of his characters on the show Gunn after working with both Sean Gunn and his brother James Gunn.

The show Angel starred David Boreanaz, who also starred in another television program that Sean Gunn would later work on. In 2014 Sean Gunn played the character of Dr. Howard Fitch on the hit television show Bones.

After his appearance on Angel, Sean Gunn appeared on the beloved comedy Third Rock with the Sun in 2001 along side legendary actor John Lithgrow. It was a great learning experience for a young Sean Gunn watching John Lithgrow in his element.

“The main thing anyone would say about John Lithgow is that he is unbelievably kind and generous. He clearly took so much joy from the profession of acting and I emulate that. I remember that the year that I guest-starred I got a Christmas card from John, which I found quite touching,” said Sean Gunn.

That same year Sean Gunn appeared in the blockbuster movie Pearl Harbour directed by Michael Bay and starring Ben Affleck, Kate Beckinsale, and Josh Hartnett. The film grossed about $200 million dollars. Sean Gunn didn’t get a history lesson working on Pearl Harbour but he did enjoy the quality of food while working on the high budget film.

“Ha! I didn’t learn anything from working on the movie other than that the food is great on movies with a high budget. But I’d like to think I’m reasonably well-read, and I knew a little bit from school,” Sean Gunn stated.

In 2010 Sean Gunn played the character of Toby in the movie Super which starred Rainn Wilson, Ellen Page, Liv Tyler. It was directed and written by his brother James Gunn.

In 2012 Sean Gunn also appeared on Season 4 of the television show Glee.

“Well, my scene was cut way down, as were all my lines. That’s never fun. But I enjoyed working with the cast and crew,” said Sean Gunn who sometimes does karaoke.

“My favorite song to sing when I do karaoke is “Gentle On My Mind”, Sean Gunn added.

Sean Gunn has done over 20 comic conventions, and he recalls his most interesting experience at a Con.

“I’ve now done over 20 Comic Cons, and it is always a joyful experience for me to meet fans. As an actor, I do what I do so that my work will be seen and appreciated by people. So to have direct contact with those people is gratifying. My most interesting experience was probably attending a Star Wars wedding in a conference room during a Con,” said Sean Gunn.

Sean Gunn is looking forward to meeting the fans in Cornwall at CAPE days before the sequel of Guardians of the Galaxy hits movie theatres.

“To the fans in Cornwall I want to say that I can’t wait to meet you and check out your excellent city! I have always had a great time with Canadian people and enjoyed their friendliness and hospitality. We’re going to have a great time!,” Sean Gunn concluded.

CAPE 2017 takes place April 22nd and 23rd 2017 at the Benson Centre. For more information about the event, including vendors, exhibits, and tickets, visit their website. The deluxe admission package, the weekend pass, and individual day passes are on sale now.

For those sharing this article on social media remember to use the following hashtag: #GetYourCapeOn

Plant a tree this spring!