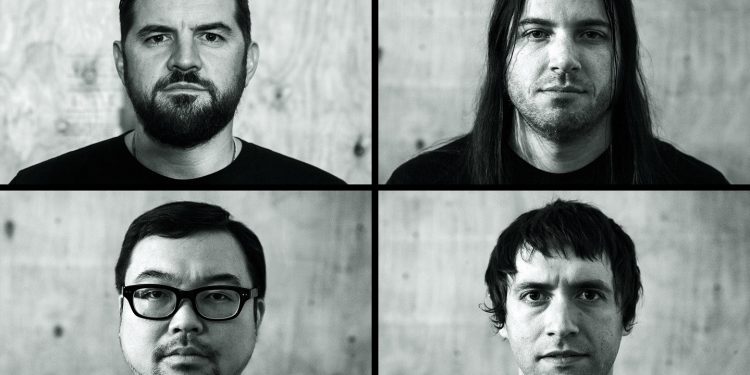 The new album was produced by Joey Cape – a punk musician best known for his work in Lagwagon and Me First and the Gimme Gimmes. Joey Cape’s experience was an asset in the studio.

“It was a pretty involved, intense collaboration. We’re longtime friends, and Lagwagon took us to Europe in 2015, where the seeds were sown for his involvement. Joey Cape provided what we really wanted on this record, which was to push the vocals beyond just screaming, to inject some melody and hone in on things like phrasings and rhythms, to make the songs coalesce, and end up a little more interesting and varied. I think we succeeded, and we’re grateful to Joey for lending his time and ideas to our songs,” said drummer Chad Williams.

“Tremulous” is Western Addiction’s sophomore album. It was released nearly 12 years after Cognicide, an amazing punk rock masterpiece that includes songs like”The Church of Black Flag”. Why such a long hiatus?

“It wasn’t an intentional hiatus. Initially we stopped playing for awhile so our singer could focus on his new daughter and family, and our original bassist Chicken focused on his own band, Dead To Me, which really ramped up right after WA stopped playing in early 2006. I think that time off ended up being longer than we thought it would be, but we started up again in early 2013. Since it had already been so long, there was no point in rushing a new album. We wanted to write plenty of songs, be rehearsed, and create the best possible record we could,” Chad Williams explained.

“It’s quite an honor to have Todd sing on our record. Propagandhi is the best band on the planet, and we’re lucky enough to have toured with them briefly in 2005. Todd recorded his vocals in a studio in Winnipeg. We just dropped ‘em in and they melded seamlessly,” Chad Williams stated.

Being on Fat Wreck Chords feels like family for Western Addiction. Since it’s inception by Fat Mike of Nofx in 1991, the label has been home to many amazing and talented punk rock bands.

“It means being a part of an institution, and having your music accepted by a broader range of people than would otherwise bother to listen. And we’ve made friends with many bands on the label through shows and tours, and every time we see them it feels like a family gathering, except it’s actually fun and not uncomfortable,” Chad Williams disclosed.

Western Addiction’s official record release show is on March 11th when they share the stage with toyGuitar, Ex Youth, Jungle Cat at the Bottom of the Hill in San Francisco. They also have upcoming shows with Good Riddance and Cock Sparrer. For more information on their tour schedule check out the Fat Wreck Chords website.

Western Addiction have not played Canada yet, but they hope to visit Canada soon. The reality is everyone in the band has a ‘day’ job which makes touring, especially in another country, much more difficult.

“We’ll play long weekends and hopefully a few mini-tours over the next year. We’ve never played Canada before, but really hope we can on this record. It all comes down to time, and unfortunately, money. And we can’t hit the road like other bands since we all have jobs, but we’ll try and reach as many parts of the continent as possible. The Toronto and Montreal areas are on our list. And obviously Winnipeg!,” Chad Williams concluded.

The new album can be purchased on the Fat Wreck Chords website.

They are the champions!