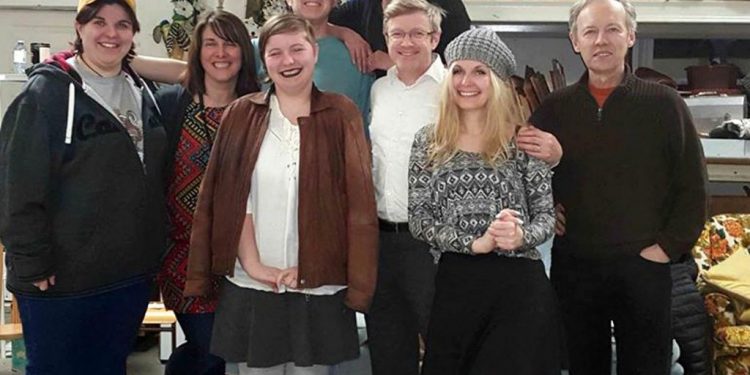 Winchester Ontario – Life can throw you curves, but it is how you deal with these that keeps your feet on the road or throws you off kilter. Alexandria Haber’s play On This Day portrays fumbling relationships, sustainable living, youth recklessness, and birthday dinners in an intelligent, funny and moving production of reality. This play was first produced in Montreal at the Centaur Theatre in 2016 and the Dundas County Players Theatrical Society is honoured to have been given the rights to produced it for its second run in Winchester at the Old Town Hall.

Starring Michael Bonner (as Clive), Rachelle Eves (as Sarah), Tony Glen (as Henry), Shannon Murdock (as Celia) and Mackenzie Pretty (as Grace), On This Day opens on April 21st at 7:30 pm. With direction by Amanda Burger and production by JP Leduc, this makes this a truly S, D & G production.

The play tells the story of Celia and Clive who live off the grid on a self sustaining farm. On this day they have invited their old friends, Sarah and Henry to dinner to celebrate Sarah’s birthday. Sarah and Henry arrive with a guest in tow. Her unexpected presence at the dinner forces everyone to confront issues that they have been hiding. On This Day, is a contemporary realist drama/comedy that takes a look at key issues facing Canadian couples in the 21st century.

Alex Haber’s plays have been produced across Canada. She has written several CBC radio dramas, as well as short stories. Alex wrote “On This Day” while in Toronto’s Tarragon Theatre Playwrights Unit and she attended the auditions in Winchester for this production.

Performances will be at The Winchester Old Town Hall 478 Main Street, Winchester on:

Tickets can be purchased on line at DCPlayers.ca, in person at The Planted Arrow, 501 St Lawrence Street, Winchester, or reserve by phoning 613-297-0097.