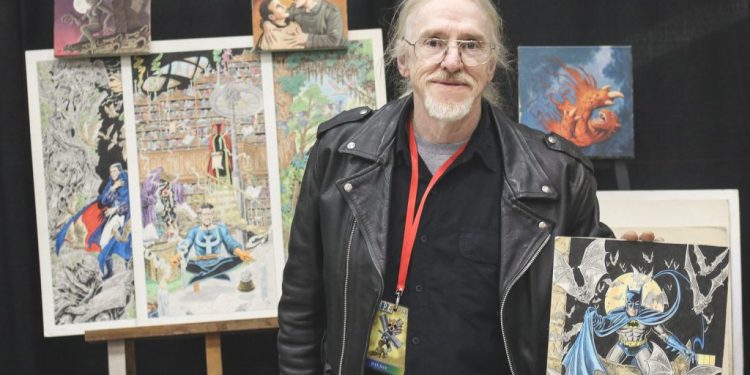 Cornwall Ontario – Legendary comic book artist Dan Day, who has worked for both Marvel and DC comics, will be a special guest at the third annual CAPE which takes place April 22nd and 23rd at the Benson Centre in Cornwall.

Dan Day has an impressive portfolio of work having done comic book cover art for The Amazing Spider-Man, Captain America, Wolverine, The Incredible Hulk, Silver Surfer, Star Trek, The X-Men, and the Cases of Sherlock Holmes. He has also been a comic book penciller and/or inker for Batman and the Outsiders, Doctor Strange, Swamp Thing and many others.

What are your favourite super heroes to work on as an artist for DC and Marvel?

“I enjoyed working on them all but my favourites are Batman and Captain America. I prefer the less super powered heroes. In my youth I drew as a hobby, I drew for fun, and I still draw for fun today,” Dan Day stated.

Dan Day grew up in a comic book family of sorts, because his brothers Gene and David were also comic book artists, while his brother Joey was more outdoorsy.

“There were 4 brothers in the family. Gene was 5 years older than myself, Joey is a year and half younger than me, and David is 9 years younger than me. So it was very loud growing up. From the age of 5 both Gene and David always wanted to be an artist, while Joey liked to be out side most of the time.

We all drew, I drew just for fun. I never thought of it as a future job. We all copied comic pages and Sci-Fi, Horror and Fantasy drawings from magazines and books. Our parents never thought anyone could make a living doing art. Gene went to George Brown College in Toronto for a year and came back home and opened up a studio and started working. After finishing high school I worked the first summer and fall as a labourer for our father, then got laid off and went and spent a lot of time at Gene’s. Over the winter I got the desire to try and become an artist. At that time our parents still did not think anyone could make a living at doing art. The next summer I got laid off early and sent out some art and got accepted to be printed in small press magazines.

Later that year Gene started to work at Marvel and he needed some help with deadlines so I took the job as his assistant. Then a few years passed and when David wanted to become an artist our parents were all for it. Now Gene had almost every comic printed from the early 60’s on. I started buying comics after Gene moved out of our parents house. My favorite comics were Batman, Captain America, Tarzan, Robot Fighteer, Conan, and Swamp Thing,” Dan Day explained.

Dan Day had the opportunity to work on some of his childhood favourite comic books like Batman and Captain America, and many of the characters he worked on have had tremendous success as blockbuster movies on the big screen.

“I think the special effects has made some of these movies possible, and the companies being more involved in their characters has made them better too,” Dan Day reflected.

Dan Day, what is your proudest accomplishment?

“My proudest accomplishment would be for a guy who never thought about having a career as a comic and gaming artist, this September will be my 40 anniversary and except for a few days it has never been work,” Dan Day responded.

The comic book series Dan Day is probably best known for is Sherlock Holmes. Arthur Conan Doyle originally published the first story of that series back in 1887. What is the appeal of that character and what can comic books do to tell these classic stories differently?

“The appeal of Sherlock Holmes for myself was when I was introduced to the stories at about the age of 10 or 12 in a book of collected mystery stories for kid’s. The Holmes stories stuck in my mind. I watched the (Basil) Rathbone movies in my late teens on PBS, but I never read another Holmes story until my late twenties. Somewhere between in my youth I wrote a note to my self reminding me that I would love to illustrate a Holmes story. The Cases of Sherlock Holmes are the original Sir Arthur Conan Doyle stories, I just added more art to them,” Day Day elaborated.

Dan Day has also worked on comic book covers for Star Trek and Star Trek Deep Space Nine. At conventions do people ask you about your work on the Star Trek comics?

“Yes they do. I tell them I’ve gotten to work on Star Trek the most. I helped my brother Gene ink on Marvel’s Star Trek comics, and I did the cover for DC Star Trek, as well as a cover for Malibou’s Deep Space Nine, and then back to DC for more covers on Star Trek and Star Trek The Next Generation, and 1,000’s of sketch card’s for Rittenhouse. Deep Space Nine, I watched for the story, and I liked the intrigue,” Dan Day disclosed.

In addition to working on Star Trek comics, Dan Day and his brother David Day also had the opportunity to work with a cast member of the original Star Trek.

Of course Walter Koenig is best known for his role as Pavel Chekov. The Raver comic book series came out in 1993.

Update on traffic closure at intersection of Cumberland and Emma