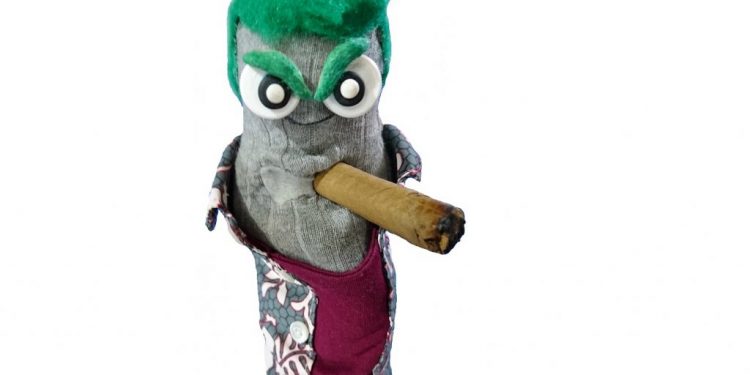 Toronto Ontario – In the 1990s teenagers from coast to coast watched Much Music – it was innovative, creative, and fun television programming. It exposed young Canadians not only to the latest music, but also interesting commentary, in-depth interviews and discussions panels, and unique segments. It gave ordinary Canadians a voice via Speakers Corner, and it helped create a unique sense of culture and identity.

There were a huge variety VJ’s and hosts on Much Music including George Stroumboulopoulos, Sook-Yin Lee, Nardwuar the Human Serviette, and of course Ed the Sock.

Steven Kerzner created and voiced Ed the Sock, a grey hand puppet with green hair, and a cigar sticking out of the permanent scowl that is his mouth. Over the years, Ed the Sock has interviewed numerous musical celebrities including Nickleback and Avril Lavigne. However what he is most famous for is being a witty, candid, and crass puppet who wasn’t afraid to speak his mind. Kerzner yearns for the days when Canadian media were true innovators with programming that represented Canada. But instead of just dreaming about it, Kerzner actually did something about it.

That’s why Steven Kerzner started the FU Network. According to his website mission statement he wants to bring back “honest, smart, original and unpredictable media to Canadians”. It should also be noted that FU is an acronym of ‘for us’.

On April 5th, 2017 Ed the Sock posted a video titled “Who Murdered Music Music” on Youtube and shared it via the FU Network channel. The scathing editorial was removed from Youtube later that same day because of a copyright claim made by CTVglobemedia Inc. View the video on Facebook here, and view the copyright claim of the removed video on Youtube here.

Ed the Sock, did the video “Who Murdered Much Music” strike a nerve? Also do you feel the video was fair use? In Canada there are fair dealing provisions in copyright law for the purposes of criticism and also for news reporting.

“Hard to say if the video hit a nerve, I kind of assumed that big broadcasters were numb to outside stimulus based on their inability to sense how to navigate the digital world. The content was definitely Fair Use, but Youtube doesn’t have a real means of defending that on a copyright strike. Trying to find someone to talk to at Youtube is like trying to find a ninja in a windowless room blindfolded,” Ed the Sock replied.

During the 2011 Federal Election, Ed the Sock started The FU Party with the stated goals of fighting apathy and stupidity in government. Are the goals of the FU Network similar? Will you be fighting corporate media in the same manner?

“’Fighting’ implies trying to take ground from them. Nope. There’s a place for what big broadcasters do. Where else can I get ‘The Mentalist’ reruns? We’re restoring what BigTV has cast aside – immediacy, interactivity, honesty, fun. Things that corporate culture killed through neglect that Canadians still want,” Ed the Sock stated.

Is the internet the last stand for creativity in media without the noose of censorship?

“Yes.. And no. It’s the place where creativity escaped to once Big TV became the Cursed Earth for innovation, but some of the most popular things on the net are the least creative. Lip synching? Beauty tips? Cooking? There’s so much on the net that is truly original and fun yet people flock to repetitive crap. FU_Network is going to be an oasis where everything – current events, politics, entertainment, music, tech – maintains a base level of creativity and intelligence. As we say, Smartass begins with Smart,” Ed the Sock declared.

The FU Network plans to feature a variety of different programming including FU Music, FU Politics, FU Entertainment, FU Life, and FU Comedy. The Comedy Clips show is hosted by veteran comedian and actor Darren Frost. Ed the Sock, what do you like about Darren Frost? Why is he the right choice for FU comedy?

“There’s no better choice than Darren Frost! He’s been making his own rules on stage, challenging audiences with more than bland stand-up and taking risks that there’s an intelligent audience that will get him. We share creative DNA,” Ed the Sock explained.

Ed the Sock is hosting “Live from Canada – It’s Ed the Sock”, broadcasting from Toronto’s landmark Hard Rock Cafe. The show has been described as immediate, unpredictable, and authentic. It’s not just live, but alive, and Ed the Sock enjoys and embraces the anarchy of live broadcasting.

“Favourite moments are when things go wrong, like we have tech failures, and we work that into the show, and interactions with passersby out of the blue, like a youth choir that stopped and gave us a spontaneous rendition of a Lion King song. Anything can and does happen, we embrace the anarchy like a lover,” Ed the Sock concluded.

Steven Kerzner, when is the next episode of “Live from Canada – It’s Ed the Sock”? Also, do you have any special guests in mind for upcoming shows or anyone you would like to have on the show?

“We’re on every Thursday at 8PM (was 9PM for winter). I have a number of friends in the media – Canadian super talent like Russell Peters, Yannick Bisson, Alan Hawco, Paul Sun-Hyung Lee, Hugh Dillon and my American past interviewees like Christina Aguilera, Weird Al Yankovic, Gene Simmons, etc. But my favourite is still the talented or interesting ordinary people we find by accident,” Steven Kerzner added.

Have any other familiar names from the Much Music era expressed an interest in joining the FU Network or will the focus being on developing new talent?

“Everyone’s been doing their own thing and following their own paths. Expect to see some former Much personalities appear as guests and maybe more as we grow. We really want to give new talent the chances to grow and learn like the rest of us VJs had,” Kerzner responded.

Do you think competition from FU Network (and others) might force corporate media to become more innovative and creative again?

“It’s not because they dislike innovation, it’s because they don’t understand it. People running networks today are MBAs and business people who are taught to minimize risk and creativity is inherently risky,” Kerzner reasoned.

Of course risky programming can be very exciting and very entertaining, and some audiences yearn for this kind of authenticity.

The demographic of the FU Network is similar to that of when Steven Kerzner was on national television as Ed the Sock.

“Our audience remains the same as it was when we are on TV, 25-54, college educated, employed, professional, 65% men, 35% women. I think that younger viewers are an ‘Ed generation’ – subversive, angry at status quo, cynical – so Ed and the tone of FU_Network suits them too,” Kerzner surmised.

If viewers want to support the FU Network they can donate. Crowdfunding is going to be key to the success of the FU Network. Here is a link with more information on donating.

“We’ve worked with a couple of sponsors that were really fun, like Reeses Big Cup and Sodastream, but we want to build our vision first rather than be shaped too early by sponsor demands. Crowdfunding allows Canadians to have a hand in making this restoration of our spirit a reality,” Kerzner concluded.

View an episode of “Live from Canada, It’s Ed the Sock” here.

Agree to Disagree : The best parenting tip ever!