Interview with Lukas Rossi live in Cornwall on April 28th 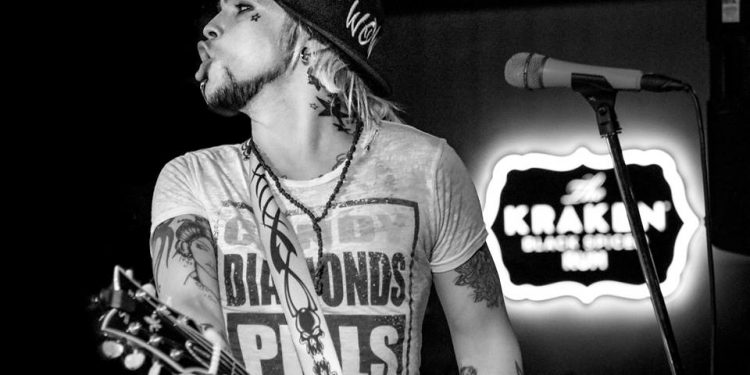 In 2006 Lukas Rossi took the music world by storm winning the CBS reality television show Rock Star: Supernova. He learned a lot about himself and about the music industry during this grueling competition and experience.

“I learned a lot actually. It was a great opportunity to hone in on my craft, and to explore new things vocally and musically with some of the greatest musicians of our time. The amount of talent from the contestants and the expertise of the judges was unprecedented. The competition drove me to work hard and gave me a great deal of respect for the business,” said Lukas Rossi.

What went through Lukas Rossi’s mind after being declared the winner of the Rock Star: Supernova reality show?

“When I won, the first thing that went through my mind was “Thank you, God”. That was the moment I realized that with hard work and perseverance, you can do anything you dream of,” Lukas Rossi reminisced.

What did each member bring to the band?

“Tommy brought the girls, and the second biggest “instrument”, haha, I’m just kidding. I think each member brought their own particular unique flavour to the band. The record was produced by Butch Walker and he helped to really bring everything and everyone’s ideas together sonically so that everyone really was showcased on the songs. Jason (Newsted) left pretty early on due to an injury, and was replaced by Johnny Colt (The Black Crowes, Train, Lynryd Skynryd). Touring with those guys was a lot of fun. We all really had a great time on the road,” Lukas Rossi stated.

Lukas Rossi’s song “Headspin” appeared on the platinum selling album by Rock Star Supernova, an album that ranked #101 on the Billboard charts, and ranked #4 in Canada selling over 100,000 copies.

What did it mean to have your song included on the album and for the album to have gone platinum in your home country of Canada?

“It was a really personal song for me, so to see so many others really relate to it meant a lot to me. And for the song I wrote to be the first and most successful single off the record really meant so much to me as well. I’m very grateful for that,” Lukas Rossi reflected.

After Rock Star Supernova disbanded, Lukas Rossi recorded an acoustic album, and he toured across the US and Canada playing more intimate shows, accompanied by Lou Dawson (Men Without Hats).

Do you prefer more intimate acoustic type of shows or playing with a full rock band at a stadium?

“Both are a lot of fun for different reasons. I love seeing a stadium full of people rocking out, and that’s a great time but acoustic shows really give me the opportunity to connect with the audience on a deeper and more personal level. You can’t hide behind anything when it’s just you and a guitar, and people can really feel that. I love smaller shows because I feel like I’m on a journey with every person there. I can feel the energy. And I can get lost in it. Both are really rewarding,” Lukas Rossi disclosed.

Lukas Rossi has been involved with several music project since Rock Star Supernova including Stars Down, Switchblade Glory, The Halo Method, and King City.

“Andy Johns was amazing. He actually called me one day and asked for the details of how I recorded my own vocals because he liked them so much. Which, as a producer, was such a huge compliment. I have a great deal of respect for his work,” Lukas Rossi explained.

“Gavin Brown was one of the first producers I worked with and I learned a lot from that experience as well. He really taught me how to approach music from my heart instead of writing what’s popular and he’s obviously got a history of bringing out the best in the artists he’s worked with,” Lukas Rossi added.

Another project Lukas Rossi worked on was the Halo Method which featured musicians like Ben Moody (ex-Evanescence) and Dave Buckner (ex-Papa Roach). The band has been on hiatus since early 2016.

Are there any talks about reviving The Halo Method and releasing a record?

“The Halo Method record is still in its final stages. We knew we didn’t want to just put out anything. So we came from the standpoint that it could take 2 months or 2 years, we just want an epic record. And we’re really taking the time to nurture those songs and put out something we all believe in,” said Lukas Rossi.

Can we expect you two to be working together again in the future?

“Dave Buckner is one of my best friends in the world. We really have immense love and respect for each other professionally and personally and I will always work with him. In fact, we just wrote a song together that will be on my next record which Marcos Curiel (P.O.D) also played on. We write as often as we can! He’s a phenomenal drummer, and a really great songwriter too. I love him,” Lukas Rossi replied.

Lukas Rossi is also working on a new solo album, that will include some of his older material.

“My solo album is also in its final stages. It’s very current but also stays true to who I am. I think as an artist, you need to always keep growing, exploring and trying new things. So this record is more fun than some of my older stuff. It’s got some songs I did with Tommy Lee, Dave Buckner and others so I think it’ll be one to remember,” Lukas Rossi stated.

In addition to the solo album, Lukas Rossi also released a video for the song “Neurotic”, a song that he did with Neil Sanderson of Three Days Grace.

“Also, I just released a song and video for “Neurotic”, a song I did with Neil Sanderson (Three Days Grace). So it’s been cool getting to do a lot of different genres and styles with some of the best. I also produce a lot of artists and bands – everything from pop to rock, country, Christian, and urban so I really love bringing all that stuff to the table in my own writing and records,” Lukas Rossi remarked.

What would you like to say to your fans in Cornwall Ontario before your upcoming show?

“I can’t wait to see you all and thanks for spending your time with me! I love my Canadian fans, you always make me feel at home! Thanks for being with me all these years, love you all,” Lukas Rossi concluded.

Black Moon Entertainment presents Lukas Rossi on Friday, April 28th at 7pm at La Maison Tavern located at 900 Montreal Road in Cornwall. The concert is 19+. Advance tickets are $20 and available at the venue and at ticketweb.ca.