Interview with Me First and the Gimme Gimmes 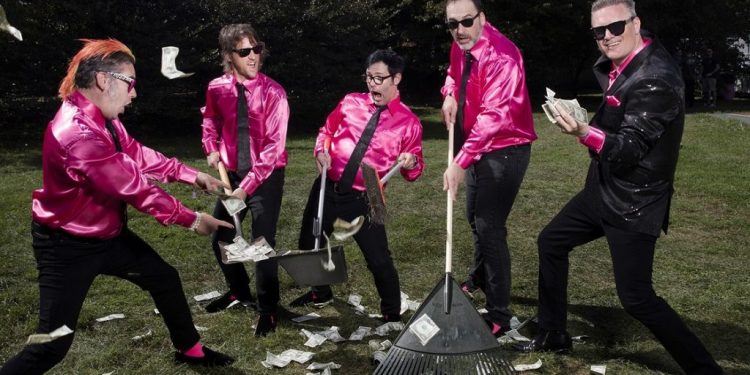 Montreal Quebec – Iconic punk rock cover band Me First and the Gimme Gimmes have a new album titled “Rake It In: The Greatestest Hits” coming out April 7th, 2017 on Fat Wreck Chords.

“We were pulling into the Riot Fest where we were taking pictures for our upcoming record. I saw some rakes leaning against industrial buildings, and since some might see it as a shameless ploy to mine our back catalog to make money, the title sort of presented itself,” explained vocalist Spike Slawson.

Spike Slawson, of course, is the voice of the band, but each member contributes something important and unique to Me First and the Gimme Gimmes.

Bass player Fat Mike is the ears and brains of the operation.

“Mike has a great ear and pop sensibilities. If anyone is responsible for the melding of punk and pop, I guess it would be him because he has a good ear for pop hooks and melodies. As for selecting songs, even if he is not an active touring member, that part is crucial for me. Hearing the song, and envisioning how it’s going to sound in our particular idiom is an art. It’s crucial and he’s great for that,” Slawson disclosed.

While Chris Shiflett is an extraordinary guitar player who helps in the studio, despite the fact that he too has a busy schedule like Fat Mike.

“Chris is very busy with the Foo Fighters. He helps us with the recordings which is great because he is a fabulous guitar player. He’s a great and well rounded young man,” Slawson stated.

According to Spike Slawson, guitarist Joey Cape is the wild card of the band.

“Joey Cape is a little more of a wild card. He’s a little less predictable. You never know what you’re going to get with him, which is wonderful. Being in a band with him is always a surprise, and it’s often a pleasant one. He provides the comic relief, intentionally or not. He’s a great all round guy. I’ve traveled the world with him and I love him,” Slawson noted.

While drummer Dave Raun is the foundation of the band.

“Dave Raun is our rock, he’s the backbone of the whole operation. I don’t know what else to say. Musically, on stage, in person, in every which way, he’s a rock” Slawson remarked.

When Me First and the Gimme Gimmes play Club Soda in Montreal on April 16th with the Pears and The Creepshow, they will have a slightly different line-up for touring.

Chris Shiflett’s brother Scott Shiflett (Face to Face) will fill in for him on guitar. Will Jay Bentley (Bad Religion) sub for Fat Mike on bass again like in past tours?

“Yes, we are over joyed and delighted to have Jay back. He is a joy to be around. There is kind of a southern California archetype, kind of a one percenter that he embodies and exceeds. He’s a wonderful human being and a great bass player too,” Slawson replied.

For the Canadian leg of their upcoming tour Me First and the Gimme Gimmmes won’t be sporting their iconic matching Hawaiian shirts.

“We’re graduating into American schlager. With German schlager, it’s like really trashy pop music from the 70s and 80s. It’s still going on today. Germans love it, even Germans that go to the same shows as you or I do, they love current schlager music and without as much irony as you and I might expect. It’s beautiful glitzy trash culture. Shiny, glitzzy, lots of sequence, but trashy at the same time. My words can’t do it justice. You have to come and see it, and it helps us get into what we are doing,” Slawson disclosed.

Last month Me First and the Gimme Gimmes released their ultra rare cover of “City Of New Orleans” on Alternative Press.

The song “City of New Orleans” was written by Steve Goodman and has been performed by Arlo Guthrie, Willie Nelson, and Johnny Cash. What is your favourite rendition of that song and why?

“The one that I’m most familiar with would be Arlo Guthrie’s, but it’s really hard to put him above Willie Nelson or Johnny Cash. I like his version, it’s honest, and expresses melancholy and pathos,” Slawson revealed.

In addition to “City Of New Orleans”, the album also features covers of “I Believe I Can Fly”, “Straight Up”, and classic country tune “Desperado”.

Me First and the Gimme Gimmes music is satirical, but not everyone appreciates or likes the satire.

“When you release versions of other people’s songs, it’s covered under satire. You’re indemnified from getting sued, because it’s satire and it’s protected. When you do a video and you sync yourself singing those lyrics to a recorded version, it becomes something else, and you need to request a license to do a video performance or version of it. For some reason we requested to do a video for “Desperado” back when we did the country record. We sent a letter to the Eagles management requesting a sync license to do our version of “Desperado” and their management responded to us and said in no uncertain terms absolutely not. Furthermore, the band wanted you to know they hate your version. Other than that, I don’t think we’re on people’s radars. I bet Boy George would dig it,” said Slawson whose band once covered the song “Karma Chameleon”.

Recording in the studio is a strange experience, considering the band doesn’t tour or work together regularly, but they are professional and experienced musicians and twenty years later they still create punk rock magic.

“It’s strange. That’s an instance where Joey’s unpredictability can definitely help provide some needed tension. Just because it’s suppose to work like an accident, it doesn’t mean that you can coast, and do everything predictably and expect what you get on the other end is going to be listenable or resonant. It’s definitely weird, we all live in different cities now. We know what it is, we know what it is suppose to be. If we pick the right songs, and attenuate our ambitions and expectations then it’ll work,” Slawson stated.

From motown, to country, and show tunes, Me First and the Gimme Gimmes have covered a huge variety of music since releasing their first full length album “Have a Ball” 20 years ago.

“I don’t have a lot of clear memories from that time, just drunken uninhibited energy,” Slawson recalled.

What is your favourite Me First and the Gimme Gimmes cover song?

“Somewhere over the Rainbow just because it has an indirect San Francisco significance. It’s a show tune sung by Judy Garland. It’s not necessarily a geographical connection to San Francisco but a cultural connection,” Slawson noted.

Would Me First and the Gimme Gimmes ever do a punk cover album, and maybe call it “We Saved the Best for Last”?

“Absolutely not. No, those songs are done. I don’t think 90s punk is an improvement over the original wave. I don’t think Mp3s were an improvement over vinyl records. I think the interesting thing to do is what Eugene Chadbourne does, like a lounge or acoustic versions of those songs. I think that is a lot more interesting than anything we could do with a punk song,” Slawson replied.

In addition to Montreal on April 16th, Me First and the Gimme Gimmes are also playing the Phoenix Theatre in Toronto, the night before, on April 15th. What would you like to say to your Canadian fans?

“Come see our new outfits, you’re going to love them. The “Rake it in” record is a reflection of many of the songs that we’re playing in our set these days. We’re really proud of where we’ve gotten our live set. We’re very happy with it. We have had a lot of success with it overseas out in Europe, and we can’t wait to take it to our home continent and run it up the flagpole and see who salutes,” Spike Slawson concluded with a grin.

Tags: Me First and the Gimme GimmesMontrealMusicPunk
Next Post