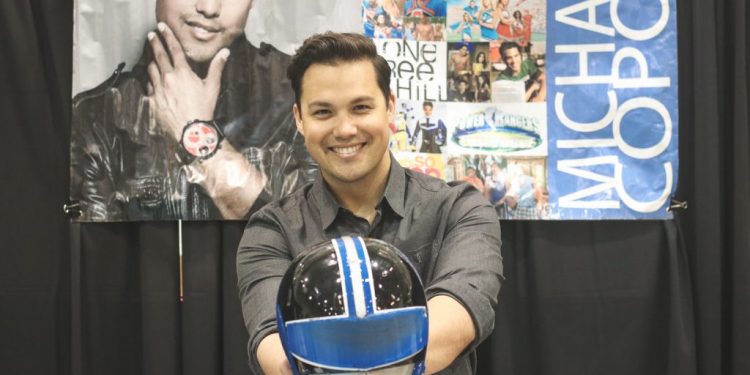 Cornwall Ontario – Actor Michael Copon will be a special guest at the third annual CAPE which takes place on April 22nd and 23rd at the Benson Centre in Cornwall. He is best known for his roles as Blue Power Ranger Lucas Kendall on Power Rangers Time Force, Felix Taggaro on One Tree Hill, Mathayus on the “The Scorpion King: Rise of a Warrior”, and Penn on “Bring It On: In It to Win It”. His acting resume also includes roles on That’s so Raven, Scrubs, Beyond the Break, CSI Miami, Hawaii Five-O, Greek, and Reno 911!.

Michael Copon began his acting career on a high note. After moving to Los Angeles at the age of 17, he nailed his first audition to become the blue Power Ranger on a new series titled Time Force.

“I moved to L.A. when I was 17. Power Rangers was my first acting audition I went in and beat out 10,000 people and became the blue Ranger. After that show ended I thought “wow that was easy”, but it wasn’t. It took four years and 1482 auditions where I heard the word “no” before I got on to One Tree hill which elevated my career to the next level,” Michael Copon stated.

A lot of fans ask him about his experiences working on the Power Rangers at conventions.

“I get a lot of Power Ranger questions at conventions but I love it. It’s amazing to be a part of this legacy forever,” Michael Copon added.

“I thought RJ did an amazing job as the new Power Ranger he was actually the funniest one and to me the most entertaining of the movie,” said Michael Copon.

After numerous auditions Michael Copon was chosen for the role of Felix Taggaro, the ex-boyfriend of Brooke Davis (Sophia Hill) on One Tree Hill. What were the challenges of portraying a character who committed a very homophobic act? Do you have any gay friends and/or family that had a strong reaction to your role in the series?

“I do have some family members that are gay and yes it was hard playing a role that is homophobic because the real me is not one to put anyone down no matter what choice they make in life. I just like people to be happy doing what they love to do. I didn’t get a strong reaction back then only because the subject of homosexuality was not as prominent as it is now. But I enjoyed being on the show and it definitely lifted my career to a whole other level,” Michael Copon replied.

In 2008, Michael Copon took over for Dwayne Johnson, aka WWE’s the Rock, as the character of Mathayus on the “The Scorpion King: Rise of a Warrior” – a prequel.

“It’s definitely intimidating to play the lead of a big studio film especially for Universal Pictures. Filling The Rock’s shoes was easy for me because I grew up such a fan of him and can even imitate him almost perfectly. I did however put my own spin on his character in the prequel and took a more serious choice,” Michael Copon disclosed.

In addition to the Scorpion King, Michael Copon was also in a sequel to the Bring It on movie series. He played the role of Penn on “Bring It On: In It to Win It”. In that movie the acting crew had to do many of their own students and cheers.

“From my understanding we were the first Bring It oOn acting crew to do all of our own stunts and cheers. We had to learn every cheer and do it full out. The only thing I didn’t do was the eight backhand springs in the beginning of the movie because I can’t do that,” said Michael Copon with a laugh.

In that movie Michael Copon worked with actress Ashley Benson, who would later play Hanna Marin on the hit series Pretty Little Liars.

“Ashley was great to work with and we had the same agent at the time so we were already close,” said Michael Copon.

Michael Copon also shared some fond memories of being on the television show That’s So Raven.

“Being a part of That’s So Raven is so cool because years later we became an internet sensation as the Boys In Motion. Labeled the original twerk team in most memes. Which is funny because I choreographed that move specifically due to the fact that I grew up in the school where booty shaking was very prominent,” Michael Copon stated with a smile.

“Also Columbus Short and I became really good friends when we auditioned against each other for Power Rangers. I ended up getting the role of Power Rangers he went on to do a stomp tour. Then we met back up for the audition of That’s So Raven,” Michael Copon added.

What’s next for Michael Copon?

“My movie Worth the Price is on Amazon prime it was the first film I wrote, directed and produced so please check that out. In regards to Dystopia, I’m still trying to sell right now. Currently I’m getting back into acting full time, so I will not be producing anything this year,” Michael Copon responded.

Michael Copon is looking forward to being a celebrity guest at the upcoming Cornwall and Area Pop Event and meeting with fans.

“To the fans of CAPE, I look forward to meeting every single one of you. I am very personable so please come up and talk. I love traveling so having the ability to meet you all in person is a blessing to me as much as it is to you,” Michael Copon concluded.