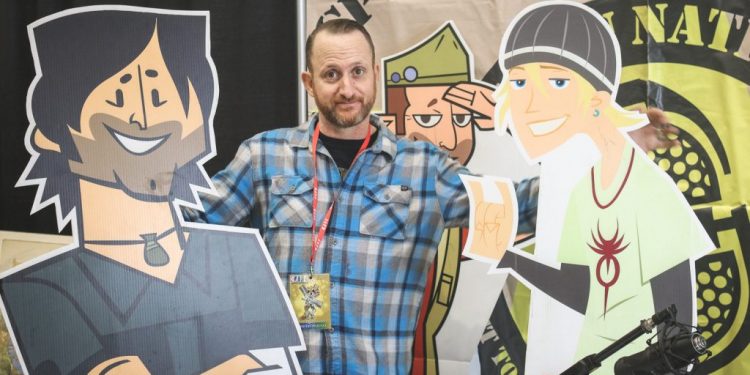 Cornwall Ontario – Actor Christian Potenza is a special guest at the third annual CAPE which takes place on April 22nd and continues (today) April 23rd at the Benson Centre in Cornwall. He is best known for his roles in 6Teen, The Tuxedo, Total Drama, Sidekick, The Ron James Show, and But I’m Chris Jericho!

The Ottawa born actor (and voice actor) moved to Toronto when he was 19 to attend theatre school, and later moved to L.A. pursue a career in acting. Voice acting came later in his career when he moved back home to raise a family.

In his youth he was the class clown at school, so acting seemed like a natural progression.

In 2002, Christian Potenza’s career took off when he landed a role as CSA Agent Joel in the 2002 movie The Tuxedo with Jackie Chan and Jennifer Love Hewitt. He had some memorable scenes with the legendary Jackie Chan.

“I was in scenes with both Jackie Chan and Jennifer Love Hewitt. There is one scene in particular right at the end, and this is on my demo reel, I actually punched Jackie Chan out and then later on he kicked me into a pool of snakes because Jennifer Love Hewitt’s character tapped him on the shoulder to get rid of me. It was an experience, it was unreal, I never worked on a movie that big before. I was pretty blown away by it,” Christian Potenza reminisced.

“I totally relate to Jude because when I auditioned for it, they said he was a chilled out skater dude, and I skate. I just sort of said the lines, and they just sort of came out of me in such a natural way, that I wasn’t even thinking I was on a cartoon. I relate to him. Jude not high as they’d have you believe, he’s just on a different level. He’s genuine, he’s compassionate, and he just has a different view on the world. So, I think growing up in the 80s, and being a late teenager and early 20 year old during the grunge era, all of that happened and I’m a product of my environment. I think, all I did was talk like I did when I was sixteen, and that’s why I got that part. There have been so many experiences because of that. When I talk like Jude, I’m just talking how I talked in my childhood. When I talk to other people, they are like dude, your voice is a part of my childhood. I was like, no kidding, it’s like our childhoods met. I hear that constantly, you are a part of my childhood, and I didn’t see that part coming,” Christian Potenza disclosed.

In the cartoon Sidekick, Christian Potenza sees parallels between Trevor Troublemeyer and Jude. They talk the same, but with a different tone of voice. He also doesn’t consider the character of Trevor to be evil, but instead just a genuine obnoxious 12 year old little boy.

“I don’t consider Trevor Troublemeyer to be evil. I consider Trevor a genuine 12 year old obnoxious little boy. I consider him inquisitive, and I consider him real. Of all the characters Jude and Trevor are kind of similar. Jude goes, “dude you’re bothering me, you’re harshing my mellow”. Trevor is like, “dude, you’re bothering me”, same voice – just a different attitude. I miss Trevor. That is one cartoon I miss a lot,” said Christian Potenza in the cartoon voices.

Christian Potenza also played the role of Chris McLean is the host of Total Drama, a show (like Drawn Together) that was a cartoon parody of reality TV.

“I consider it a complete parody and ripoff of the live action reality world. It’s just a cartoon. It’s weird, because it’s actually scripted and animated,” Christian Potenza stated.

“It was awesome, and you know what, I’m not a wrestling guy at all, but I get there and everyone is like oh my god, you’re working with Chris Jericho, and I’m like yeah. They’re like, can you get an autograph for me? I’m like sure. I get there on set and Chris is like dude my kids think you’re awesome. My kids think you’re absolutely the best. I watch your show all the time. So I’m signing autographs for Chris’s kids and his family, and he’s signing autographs for all my friends and family. After that first day we were friends. I still call him once in a while,” Christian Potenza responded.

Christian Potenza has also made numerous appearances on The Ron James Show. He was the buddy of Ron James on the show, and became his friend in real life.

“Ron James is a friend of mine, he’s a very good friend of mine. When he asked me to be on his show, I was actually blown away that he picked me. He kept using me a lot. Him and I would play buddies. There were many skits on that show, but I think my favourite one though… there was the last supper one, no, there was the one where we were in the jungle, no, I think it was the stake out one where him and I are cops on a stake out, that was my favourite one. I loved how they hooked me up with him, where I’m his buddy, and now we’re friends,” Christian Potenza replied.

Christian Potenza enjoyed his Saturday at the Cornwall and Area Pop Event and he is looking forward to day two at CAPE.

“I love coming to the small conventions, because I’m sick and tired of the big ones. I just want to hang out with fans. When I come to the small ones it allows me the chance to just chill out, enjoy the atmosphere, and here from people who are like, dude you were a part of my childhood, and let me tell you about my experiences when watching your show. I’m 44 years old. A lot of these people were 10, 11, 12 when the show came out, and they are in their 20’s now, and they’re bringing their own babies to the conventions. This is cool. These smaller shows in the smaller towns allow me a chance to actually talk and hang out and share stories,” Christian Potenza concluded.

CAPE 2017 takes place April 22nd and 23rd 2017 at the Benson Centre. For more information on guests, ticket prices, and times, visit their website.

Tony Luis - Blast from The Past #1