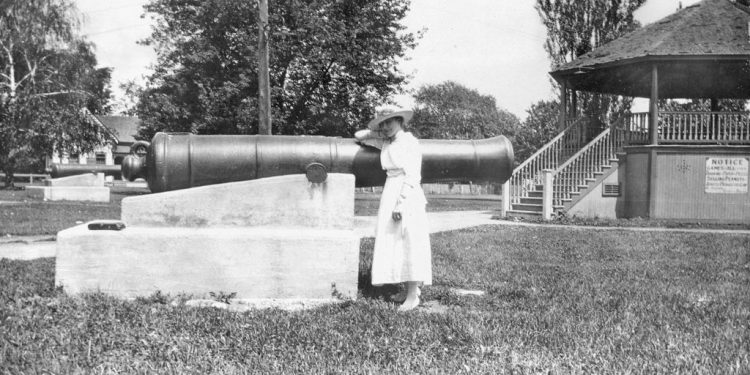 This aerial photo from the 1970s gives us a glimpse of the city block which, at that time, comprised the area between Water Street East, Sydney Street, First Street East and Amelia Street. The easterly 2/3 of the block were then home to Horovitz Park. Other than for a small area on the n.e. corner, Horovitz Park is gone as are the homes and businesses.

Cornwall Square, which opened in 1979, in part occupies a portion of the former block. Since 1984, the Chevrier (glass) building occupies the east part of the former park. Lower Sydney Street was re-aligned to accommodate the Square.

The Site’s Prior Use
In 1793, in that block, the Court of Quarter Sessions approved the construction of the Town’s original County Courthouse and Gaol, which burned down in 1826 and was ultimately re-built and opened two blocks to the west in 1834. During the War of 1812, that original court room was used as a barracks and the court temporarily relocated. This site later housed a largely privately-funded drill shed, built in the winter of 1863. The drill shed was later moved to the site of the present City Hall and was demolished in 1885.

On May 8, 1820 a market house was erected in the Market Square (the same area later occupied by the park). The Market House was a failure for its intended purpose of selling farm produce and became occupied primarily by a number of butchers. The Market continued at that location prior to relocating to what is now the site of City Hall in 1843.

In 1882, although to a different building, the Market returned to the Water Street site due to expansion at the Town Hall. On January 18, 1887 a disastrous flood brought an abrupt end to the Market, resulting in the merchants dispersing throughout the business section of the Town. The vacated Market House was leased for manufacturing purposes and was demolished years later.

Central Park
The Town opened the park in the late 1800s. 1898 saw the arrival of the two 6,500 pound canons, which were previously used on ships to defend the St. Lawrence.

In 1900 the park saw the addition of a large decorative fountain. An elevated bandshell was installed in the early 1900s.