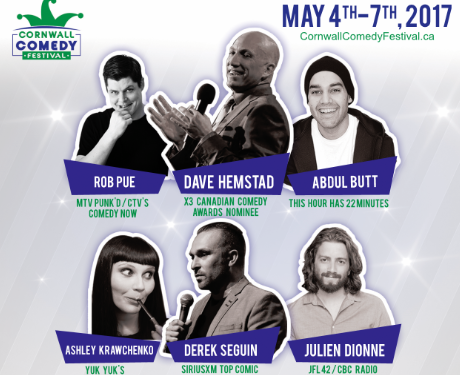 Last night, in Cornwall, I had a profound experience.

Last night, in Cornwall, I attended the Comedy Festival.

I always enjoy my time at that festival.  Shawn Fowler always does such a great job with it.  I laughed my head off and it felt good.  As expected, all the acts were a barrel of laughs and the host, Derek Seguin, had us rolling on the floor, in tears, with his usual goofy self and (overly played?) French Canadian accent.

Dave, the last act of the evening, was nothing short of brilliant.  The three-time Canadian Comedy Award nominee and current regular on CBC’s “The Debaters” showed the public a side of comedy that I wasn’t familiar with.  Not only did he have everybody in stitches because of his jokes, dexterous facial expressions and pretend immaturity, he eventually had us all pause and seriously think.  See, he caught everybody by surprise when he skillfully hid a powerful message in his routine.  He used comedy as a vehicle to drive home a very serious point: gender equality, or rather, inequality.  And boy, was it ever effective!

Yes, I’ve seen stand up comics try to convey a political or social message in the past, but never done with this level of mastery.

He spoke about little girls and about the message they receive early on in life through shows, fairy tales and even clothing lines.  He pointed out how, on marketed merchandise, boys are always “king of something” and girls figuratively  kept in the kitchen. He told us to embrace our differences, but also shared how he wants his 2 year old daughter to become strong and powerful.  And he said all that serious stuff while cracking jokes and keeping it light, kind of like a mother hiding veggies in a muffin so her kids will get the nutrition they need.  It was both touching and weirdly empowering!  I was fooled.  I got the message.  And When I realized I did, I was mind blown.

The Cornwall Comedy Festival continues tonight in Williamstown at Jack’s Pub and at the NAV Centre in Cornwall, and tomorrow at the Martintown Community Centre.  Visit http://CornwallComedyFestival.ca for mor info.