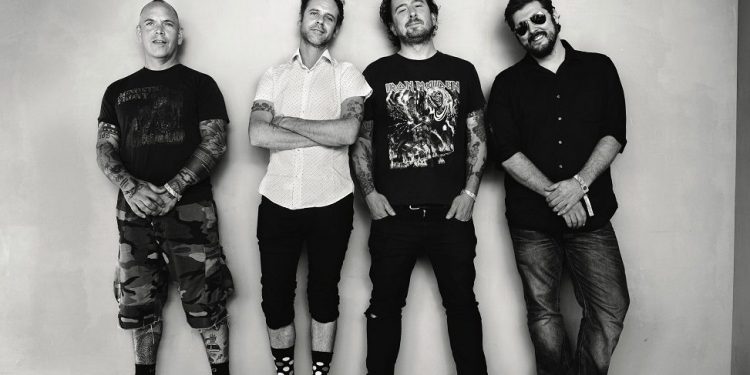 “Oh man… there’s so many. X, who’s playing that show is definitely one of our biggest influences. I just went and saw The Damned last week and they’re another band I’ve loved since I was really young. There are so many great bands from that era and they probably influence The Bouncing Souls more than anyone,” guitarist Pete Steinkopf disclosed.

In 2016 The Bouncing Souls released Simplicity, and the album hit #157 on the Billboard. Unlike, their 2012 release Comet that was recorded by legendary punk producer and Descendents drummer Bill Stevenson, this album was mostly recorded live to give it a more raw feel.

“I’m pretty stoked on Simplicity. Bill recorded our last record Comet and he was so awesome to work with. He’s a hero to us and we’ve been friends for a long time. This time around though we just decided to strip things down and record most of the record live. We wanted to recapture that live feeling and just wrote songs that we thought would translate into a live show. We recorded it with our old friend John Seymour who we worked together on How I Spent My Summer Vacation and Anchors Aweigh,” Steinkopf explained.

Simplicity is the first Bouncing Souls album to feature their new drummer George Rebelo, who joined the band in 2013. He has an impressive resume drumming for Hot Water Music and Against Me! What has it been like touring and recording with George?

“George is the best! He’s a very old friend of the band and he was the obvious choice when we needed a new drummer. He brought so much new energy and great ideas to the table while we were writing the record, and it’s been nothing but a pleasure touring and hanging with George,” Steinkopf remarked.

The Bouncing Souls released a new music video titled “Satellite” from their album Simplicity. It cuts between live footage and a girl building a race car. The live footage was captured using a drone. How did that come about?

“A couple of guys approached us about making a video last summer with a drone. Our big local show in New Jersey was coming up so it seemed like a great time to get some good footage. I can’t exactly remember how the whole thing came together, but they incorporated the story with the girl building a car to race. She’s actually our buddy’s daughter,” Steinkopf stated.

Are The Bouncing Souls working on an 11th studio album? Is there anything you can tell us about it?

“No plans yet. We have our 30th anniversary coming up in a couple years, so we’re just kind of plotting and scheming about that right now,” Steinkopf explained.

Over the past 28 years The Bouncing Souls have had an impressive career and have left their mark on the genre of punk rock. Whether it be the Punk O’ Rama CDs on the BYO Split Series album they did with Anti-Flag – they have created many remarkable albums and amazing songs.

“Yeah those Punk O Rama cds were great. I still have so many people come up to me and say that they first heard of us from those. And I love that BYO split too,” Steinkopf added.

From time to time The Bouncing Souls have gotten political. The band particpated in the “Rock Against Bush” CD. They also have a new single titled “Battleground,” supporting the Indigenous Environmental Network.

“I think if you look back at our catalog, we are always writing and reacting to the world around us. Whether that be about love, pain, happiness, fun, politics, etc. it seems hard not to have some kind of opinion these days. There’s a hell of a lot going on. We just kinda call it as we see it. Agree or disagree,” Steinkopf proclaimed.

“It’s gonna be awesome! We’ve played a lot with both of these bands in the past and we’re really excited to be all playing together. There’s a lot of history between all of us and we’re stoked to be part of this show,” Steinkopf noted.

The Bouncing Souls are looking forward to returning to Canada.

“We love Canada . We love playing and hanging out in Canada with all our Canadian friends. We can’t wait!,” Steinkopf concluded.

’77 Montreal includes exhibits of punk posters, vendors, a record fair, films, and more. Tickets are $60 and available via 77montreal.com.