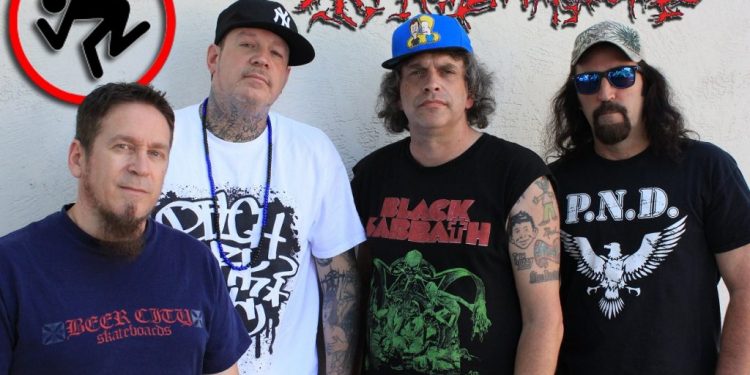 In 2016 D.R.I. released the EP “But Wait…There’s More!”, their first new release in eleven years. It was produced by Bill Metoyer who has also produced bands such as Slayer.

“We took some time off then toured the world after that. We have so many offers to play that it seemed a shame to stop touring and go back in the studio considering how poorly CD sales are these days,” said vocalist Kurt Brecht.

Early on D.R.I. gained notoriety for their song “Madman” that included a sound byte of Kurt’s father interrupting a band practice to complain about the noise.

“We were recording our rehearsal when my dad came in,” Brecht explained.

Kurt Brecht is now a father. In retrospect, does he now have empathy for his dad interrupting their band session?

In the 1980’s D.R.I. toured with the Dead Kennedy’s on the “Rock Against Reagan” tour. Will there be a “Rock Against Trump” tour, and will this current presidency lead to more political punk music?

“I am sure there will be plenty of protest concerts and tours. Yes, punk might become more political,” Brecht stated.

In 2005 D.R.I. released a live album from a 1984 show at CBGB’s, the now defunct legendary New York underground music venue famous for hosting such bands as the Ramones.

“I had good times hanging around outside the club on a Sunday waiting for the punk matinee! I don’t really miss it much. For me, I was starving and broke,” Brecht reminisced.

In 2003 Nofx released the album The War on Errorism with the song “13 Stitches”. The song makes an allusion to D.R.I. The lyrics read: “My girlfriend started to cry ’cause we had to leave before D.R.I. played 50 lousy songs”. Is there any animosity between the two bands?

“I know Fat Mike and asked him about that. I don’t think he really dislikes us,” Brecht stated.

Notwithstanding those Nofx lyrics, many bands have cited D.R.I. as an influence or inspiration over the years including Anthrax and Slayer.

Does D.R.I. have any special plans for their 35th anniversary?

A part of their tour includes Canada, and Kurt Brecht is looking forward to returning here.

“Canada is great and the people are awesome and we really missed going there and playing there and we are super happy about being allowed back in! Our west coast shows were even better than expected,” Brecht concluded.

Punch Drunk, Näärtok, and Asile will be opening up for D.R.I on Friday, July 28th, 2017. The Brass Monkey is located at 250A Greenbank Rd., in Ottawa. The show is 19+, doors are at 8pm, and the show starts at 8:30pm. Tickets are $29.50 and available online at ticketfly.com. Buy your tickets early before they’re sold-out.