The Book Nook: Much Ado About Nothing

by Editorial Board
in Arts and Culture
Reading Time: 2 mins read
27 2 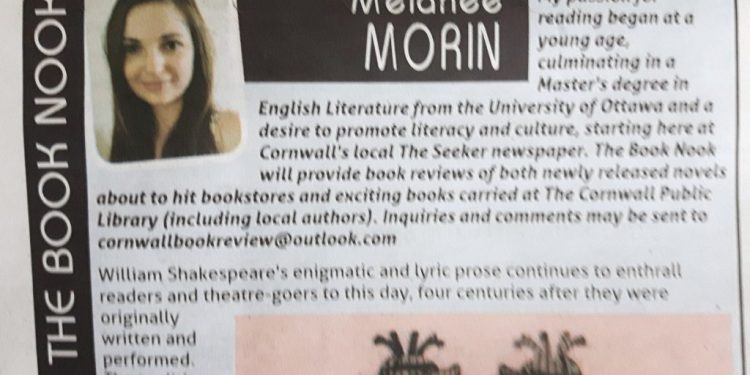 My passion for reading began at a young age, culminating in a Master’s degree in English Literature from the University of Ottawa and a desire to promote literacy and culture, starting here at Cornwall’s local The Seeker newspaper.

The Book Nook will provide book reviews of both newly released novels about to hit bookstores and exciting books carried at The Cornwall Public Library (including local authors). Inquiries and comments may be sent to [email protected]

William Shakespeare’s enigmatic and lyric prose continues to enthrall readers and theatre-goers to this day, four centuries after they were originally written and performed. The tradition continues here in Cornwall every summer at the annual Shakespeare in the Park performance, a part of the Arts in the Park season held at Lamoureux park. In honour of this year’s performance of Much Ado About Nothing by Montreal’s Repercussion Theatre, let’s take a closer look at one of Shakespeare’s best, and most popular, romantic comedies.

Much Ado About Nothing takes place in the tranquil Italian village of Messina, home of nobleman Leonato, his virtuous daughter Hero, and his witty outspoken niece Beatrice. The arrival of Prince Don Pedro, his illegitimate brother Don John, and aristocratic soldiers Claudio and Benedick from a recently won war creates tension and intrigue in this idyllic town. Claudio immediately falls for the angelic Hero, while Benedick and Beatrice participate in a battle of wits exclaiming their disdain for love and marriage. While the reader is set to expect these two couples to come together in marriage, the traditional ending for a Shakespearean comedy, they must first overcome numerous trials and deceptions to reach the happy ending.

In the beginning of the play Beatrice laments, “Men were deceivers ever, / One foot in sea, and one on shore, / To one thing constant never,” while Benedick similarly decries the “sharp tongues” and flightiness of women. However, these dual gender stereotypes are proven to be simply another example of baseless accusations that run rampant throughout the play: Don John attempts to undo Claudio and Hero’s marriage by implying Hero is unfaithful, and Hero subsequently fakes her own death until her good name is restored. Messina is a world where everyone talks and the power of both true and false words is shown. Even Beatrice admits “I was born to speak all mirth and no matter.” Within this lighthearted comedy, Shakespeare examines how deception and lies both create and calm tragedy. When Claudio realizes his mistake in believing rumours about Hero, Don Pedro’s earlier advice to him rings true: “And thou shalt see how apt it is to learn / Any hard lesson that may do thee good.”

Much Ado About Nothing is one of Shakespeare’s most accessible and relatable plays for modern audiences, dealing with timeless themes of love, deception, and redemption.

If you want more Shakespeare, Repercussion’s production of Much Ado About Nothing runs until August 15th at various locations (see www.repercussiontheatre.com).

Eating Locally at Marrow and Spice