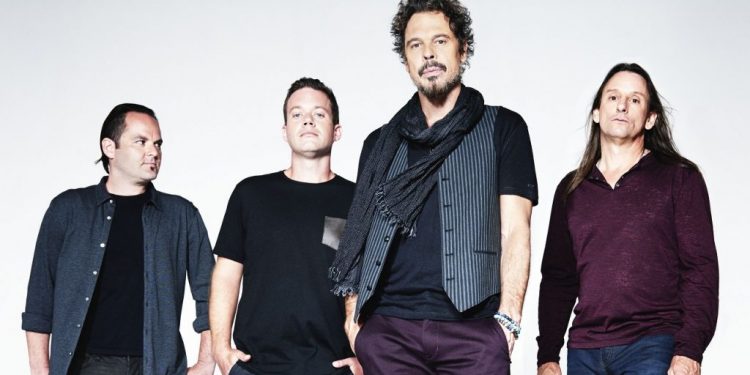 Timmins Ontario – Big Wreck and Finger Eleven will be co-headlining day two of the Rock on the River Festival in Timmins on Saturday, July 29th, 2017. Adam Gontier, the former lead singer and rhythm guitarist of Three Days Grace, will also be playing on the Saturday.

Their new album “Grace Street” was released in February, and it includes the single “One Good Piece of Me”. Lyrically this record is a lot more revealing and bare bones.

“I’ve gone back to it a few times since it came out. When it was initially done I listened to it a lot. I love how everything comes together sonically and song wise. I think we’re touching on new territory. Lyrically I think it cuts closer to the bone, and I think it’s the most revealing. There is a lot of stuff on the album that is bare bones. Here’s what is going on, and here’s where I am at. Having said that, I don’t think it’s dark and heavy. There is a lot of optimism and hope as well. It feels like there is something a little more upfront as far as content goes,” Big Wreck frontman Ian Thornley explained.

In 1997, Big Wreck tore into the music scene with their debut album “In Loving Memory Of…” which went double platinum. Does it feel like 20 year has passed and what has changed for the band?

“In many ways it feels like 20 years ago, and in many ways it doesn’t. The band has changed, and members have changed. Brian and I, are the two original members, and the way we approach things has changed drastically. How we behave has changed, attitudes have changed, and the business has changed drastically as well. In many ways it feels like a different time (twenty years ago). The live show back then was an experience for all the people attending, as well as the people performing. Now everyone in the audience usually has a phone in the air for the whole show, so now it’s not just for the people in attendance – it’s for everyone who watches on Facebook or Instagram. The whole thing feels different in many ways, but it’s still just four guys doing what they do best together – looking for that spark in every song, sometimes once a night, and sometimes not at all. That spark, that’s something that has always been there, and knock on wood, I hope it’s something that will always be there. That search for that feeling, like you’re almost outside yourself – and you’re completely in the moment and everyone is there at the same time, on the same page, it’s quite the rush. That’s always been the singular focus of our band – trying to find that within a song and within a performance,” Ian Thornley reflected.

In 2002, Big Wreck disbanded, and Ian Thornley formed the band Thornley which was a huge success. But in 2010 Big Wreck reunited, and soon after the album Albatross was released and it debuted at #5 in Canada. Why did the band break-up, and what was the catalyst for reuniting?

“With the initial break-up everyone was just disillusioned with the entire industry, where we were going, what we were doing, and why. Looking back, we were burned out, doing too much of the wrong things for the wrong reasons, and it had to change. The band started the friendship I had with Brian, when we were roommates in college, and afterwards. I think getting back together stemmed from that – just missing a friend and reaching out. We started hanging out a little bit, both at similar points in our lives, and we rekindled a friendship,” Ian Thornley disclosed.

“Things just sort of fell into place – with the Thornley thing winding down, and steering towards a Big Wreck sound. It worked out that way, and it felt right. It felt weird at first to call what we were doing with “Albatross” Big Wreck. Sitting with it for a bit, I guess it has that sound, so why not? I was recording “Albatross” initially to be a Thornley record. It was Nick Raskulinecz’s idea that we should call it Big Wreck. It was initially met with some hesitation, but Eric Ratz was on board calling it Big Wreck too, so why not – roll the dice. I was just making music, and I was making music without someone hanging over me. When I have more creative freedom it’s going to sound more like a Big Wreck album. Calling it a Big Wreck album, everything seems right in the world, even though we initially went in just to record music,” Ian Thornley added.

Ian Thornley got his first guitar as a birthday gift from his father, but it quickly ended up in the closet. A year later, with the encouragement of a friend, Ian would pick up the guitar again – and a music legend would be born.

“I think my first guitar was a Fender acoustic. It was just a cheap acoustic my father got me for my birthday. I learned a chord or two and then put it in the closet. It just sat there for about a year until I befriended a guy who was a really good guitar player. He found out I had a guitar and started showing me some things, and I was like oh man, I didn’t know it was like that, and that was it. I was about sixteen, I came to the guitar pretty late,” Ian Thornley reminisced.

Now Ian Thornley has a Suhr guitar named after him.

“I got a Signature guitar coming out – that’s an accomplishment for me. That’s up there, I’m doing cartwheels right now, at the prospect of having a guitar with my name on the back of it – designed to my specs, it’s my head and body – that’s a thrill. But again, I didn’t build the guitar. We went back and forth for over a year. It all had to do with the play ability and the sound, how many sounds and which sounds. There was a lot of thought and a lot of back and fourth. The people at Suhr were very accommodating. There are little things that I like that are off the beat and path, and it’s turned out perfectly,” Ian Thornley stated.

“I haven’t seen the guys in Finger Eleven for a while, good guys and good band. I’m looking forward to seeing them and everyone in Timmins,” Ian Thornley concluded.

It’s going to be a great night! For more information on Rock on the River, including where to buy tickets and the complete line-up of bands, visit the festival’s official website.

City to offer FREE PARKING and FREE RIDES to RIBFEST!