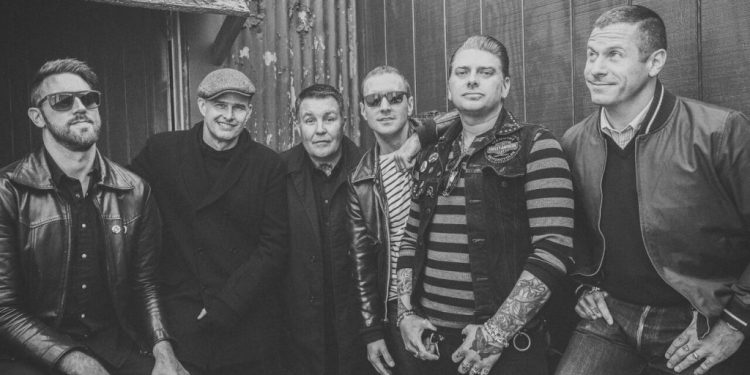 Dropkick Murphys and Rancid are  on the ‘From Boston to Berkeley Tour’ this summer.

This is the first time the two bands, and long time friends, are touring together. Back in the day, it was Tim Armstrong of Rancid who signed Dropkick Murphys to his label Hellcat Records.

“Haha, I suppose 1997 is considered back in the day now! Ugh, I’m getting old! We’re really looking forward to it, as we’ve been pals with them forever and have actually never toured together! I think it’s about time,” stated Dropkick Murphys drummer Matt Kelly.

In 2017, Dropkick Murphys released their latest album ’11 Short Stories Of Pain & Glory’ on their own label ‘Born & Bred Records’. The album ranked #1 on iTunes and #8 on the Billboard Top 200. At the time of release it was the #2 best selling album (second only to the soundtrack for the award winning movie La La Land starring Ryan Gosling).

“I was actually surprised how well the album did considering the fact that, number one, people don’t legally “buy” a lot of music these days, and number two, what we play is so far from the garbage in the mainstream. I can’t believe that many people bought the album, so happy days!” Matt Kelly exclaimed.

What is Matt Kelly’s favourite song off the new album?

“That’s a tough call… it isn’t my favorite one, but strictly from a playing perspective I really like “I Had A Hat.” The end of each chorus tagging into the re-intros have a little bit of an “off-time” bit which I have to think about while playing (at least while the song is newer), so it’s a slight mental challenge for the boys while we’re playing it live. It gets the crowd moving well, too,” Matt Kelly reflected.

The Celtic punk band also released a new music video titled “Until The Next Time” which seamlessly blends tour and concert footage. The song is about one day seeing old friends again, and it’s also an ode to a tour mate that sadly passed away.

“The theme of the song is mostly to do with coming through a town and seeing old friends and supporters. We don’t always know when we’ll come back, but that we eventually will see each other again. It’s also partially an ode to our friend and tour mate, Colin McQuillan from the great band Runnin’ Riot, who sadly passed away in his sleep while on tour. We’ll meet again, my friend,” Matt Kelly proclaimed.

“Tim and Jeff bring musical knowledge, theory, and the ability to play anything and transpose from instrument to instrument. James is the best rhythm guitarist in the business, with musical chops of his own and the ability to transform a song from good to great. Al brings passion and fire: He can throw down a good turn of phrase, is a lyric-writing machine, and is an amazing and dynamic front man – I don’t really know how he does it every night. Ken is the mastermind behind the band, great songwriter, perennial prankster, the guy who steers the ship that is the Dropkick Murphys, and the guy who asked me to join as drummer back at the Rathskeller in 1997. It’s my privilege to create and play music with these boys and call them friends, though (as cheesy as it sounds) it’s more like family than just friends by this point,” Matt Kelly explained.

Dropkick Murphys have released 9 albums in 20 years, and have recorded numerous hit songs including “The Boys Are Back”, “I’m Shipping Up to Boston”, and “Rose Tattoo” featuring the legendary Bruce Springsteen.

“That was great (working with Bruce Springsteen). It was very special because some of our guys worship his music. As much as a legend as he is, he is very down-to-earth and approachable as a person, which can certainly be appreciated after all these years of being a star. He’s one hard-working fellow both on and off stage and I don’t know how he still does it!,” Matt Kelly disclosed.

“The Warrior’s Code” is another hit song by the Dropkick Murphys. A snippet of that song was featured in the Academy Award-nominated film The Fighter. Interestingly, there are some boxers of Irish decent who play Dropkick Murphy’s music during their ring entrance.

“That’s really cool! I guess a lot of our songs are aggressive and might be suitable for that. I think maybe these boxers from Ireland hear us and think of our music as a bridge between them and potential Irish-American supporters. Either way, if it gets a guy ready to head into the ring and practice the sweet science, then more power to him!,” Matt Kelly remarked.

Growing up, Matt Kelly’s dad influenced both his love of drumming and his love of hockey.

“I would borrow my dad’s Rogers kit. 24” kick, 12” rack tom, 16” floor tom. I was eight years old and wanted to play the saxophone, and my dad had his drum kit set up in the living room, cleaning and maintaining it. So I sat down to play it and decided then and there that I wanted to play drums. Lessons started that October, and the rest is annoyance for my neighbors for the rest of my life, haha,” Matt Kelly revealed with a chuckle.

Matt Kelly also grew up watching hockey and cheering for the Boston Bruins with his dad. Several years ago his love of drumming and his love of hockey collided together in the most amazing way possible. The Dropkick Murphys played during the opening ceremonies of the Boston Bruins and Philadelphia Flyers NHL Winter Classic in 2010 in front of over 38,000 people outdoors at Fenway Park. Right after the song, Bobby Orr hit the ice for the ceremonial face-off.

“I am a Bruins fan and have been since watching with my dad in the late 1970s. Hockey was always my favorite sport; it must have been my dad’s influence. He and his friends would play out on the pond or street hockey in the parking lot. I have a lot of early memories of it, so I think it’s tied into my childhood. It’s a sport that breeds good teamwork, humility, and of course years of practice and discipline. To me, hockey is the beautiful game,” Matt Kelly added.

The Boston Bruins won that game 2-1 in overtime, and the Dropkick Murphy’s won the hearts of nearly 4 million people watching the game on television.

Montreal, which is also a hockey city, will be celebrating 40 years of punk with the ’77 festival.

Are there any old school punk bands that you consider to be a major influence now or early-on in your musical career?

“Sure, of course! Bands like the Ramones, Stiff Little Fingers, the Pogues, Cock Sparrer, the Macc Lads, La Peste, Gangreen, the Misfits, the 4-Skins, and tons more,” Matt Kelly reflected.

The Dropkick Murphys are looking forward to their return to la belle province on July 28th.

“Thank you for the two decades of support. Our gigs in Canada, and specifically in Montreal, are among the wildest in North America. The Great White North is a special place indeed,” Matt Kelly concluded.

The photo of Dropkick Murphys was taken by Gregory Nolan.

Car Seat Clinics - Here to help you learn & be safe!