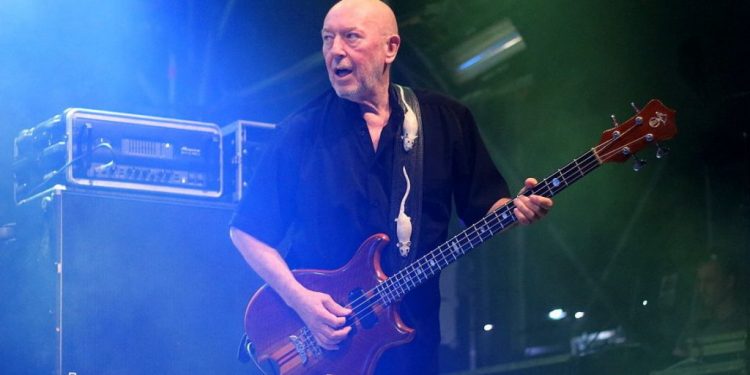 The band will be celebrating it’s 50 anniversary next year with a new album, and yet another world tour.

Nazareth have signed with Frontiers, an Italian record label that specializes in classic rock.

“We had quite a few offers from different European record companies. These days when you make a new album, people don’t make a living selling records anymore. That’s not what you do. You just hope someone is going to do a good job letting everyone know there is a record there. These days the album sales are way down. You just want someone who makes sure everyone gets to hear it at least. One of the really good ones at doing that is Frontiers. I got some friends who have been on there lately, and they said the label did a good job for them. So let’s do it. They specialize in classic rock type bands, so they are the right people to promote this one,” Pete Agnew answered.

The current line-up of Nazareth is Pete Agnew (bass, backing vocals), Jimmy Murrison (guitars) Lee Agnew (drums, backing vocals), and Carl Sentance (vocals). They have been individually writing new material, but nothing has been officially decided for the new album. Those decisions will be made during their European tour starting in November.

“We all write individually. I have 2 or 3 things I am working on. I got a good mixture of stuff going on at the moment. Jimmy, Lee, Carl, they’ve been writing, but I don’t know exactly what they have ready. Nothing has been fully decided for what’s going on the record. We’re doing a big European tour in November and December of this year. There will be a lot of talking then, weeding out what songs we’ll be doing and what songs we’re not doing,” Pete Agnew disclosed.

Nazareth’s last album “Rock ‘n’ Roll Telephone” got terrific reviews, and is among their very best work, so it’s going to be a tough album to follow.

“Rock ‘n’ Roll Telephone was our last album. It’s a great album, one of the best Nazareth albums we ever done. Because of the way record sales are these days, there is nothing in that included in the set, because not that many people own it. That’s not the way it works anymore. You can make an incredible album, and it’ll sell 10,000 copies. Back in the day you were selling a million of them when it came out. When you get a new album out, for the first six months, you play 2 or 3 songs from it just so everyone gets to hear it, but eventually the set reverts to all the hits again, that’s life. The actually album, yeah, it got great reviews and we’re very happy about that. It will actually be four years by the time the new one comes out since we released “Rock ‘n’ Roll Telephone”. It’s a nice space between albums, but it’s going to be hard to follow-up. We can feel that right now when writing,” Pete Agnew admitted.

Did Pete Agnew ever imagine playing bass for 50 years? The short answer is no.

“No I didn’t imagine playing bass. When I started the band back in 1961 as The Shadettes, we eventually became Nazareth. I was the lead singer and guitar player then. Eventually when Dan (McCafferty) joined around 65-66, and we did a twin vocal thing, we had two vocalist, and I kind of stopped playing guitar then for a couple years. What happened is the bass player, and we came from a very small town, left the band. When the bass player was no longer going to be with us, the guys in the band said you play the bass. You played the guitar so you must be able to play the bass. That’s how it came to me. I never thought I’d ever be playing bass guitar. It wasn’t a thing I thought of doing. It just came to me by default almost. I started playing the bass in 1968, basically just before we became Nazareth, and it was only because we couldn’t find anybody else. I’m glad I did now. I still think it’s funny thinking of myself as a bass player. I was always a singer and guitar player,” Pete Agnew pointed out.

After Dan McCafferty’s retirement from the band in 2013, Pete Agnew became the last original member. Perhaps that is only fitting, since he is the one who formed the band in the first place.

“At the beginning you never think of how it’s going to end up. Until three or four years ago, Dan and myself were still here. It’s kind of funny, because it was me who started the band, and now I’m the only (original) one that is left. Most of the bands I grew up with, that recorded at the same time, and played at the same, they all have one or two original members in them now. It’s a natural progression of what happens these days. We’re all getting older. There is not a steady lineup of guys 71 years old,” said Pete Agnew.

One of Nazareth’s biggest hits is the song (and album) “Hair of the Dog”, better known as “Son of a Bitch”. The name change ensured the album could be sold in North American stores like Sears.

“The song “Hair of the Dog:, it was actually called “Son of a Bitch” as you probably know. Everyone calls it that. Back in 1974-75 when we recorded that. We didn’t know when we went to an American record company, A&M at the time, you can’t call it “Son of a Bitch”. Sears won’t sell it. What are you talking about? It was a big no-no, it was considered a swear word which we thought was very funny, because we heard John Wayne saying it for godsakes. He was an icon. It wasn’t an expression used in Europe. It was an Americanism. No one in the band thought it was a big deal. It makes you laugh these days when you see what’s on a record with the hip hop guys. That was a big thing at the time. It was a swear word. Deary me! So we couldn’t call the album “Son of a Bitch”, because Sears wouldn’t sell it. So we thought we’d be smart asses and call it “Heir of the Dog” – son of a bitch, haha. But after a few drinks we changed it to “Hair of the Dog”. That’s basically where it came from. It’s not the title we started out with, and everyone calls the song “Son of a Bitch” anyways. Nowadays it would be called “Son of a Bitch” and nobody would even blink their eye,” Pete Agnew surmised.

Nazareth have millions of fans around the world including including Axl Rose of Guns N’ Roses. He was such a huge fan of Nazareth that they covered “Hair of the Dog” on “The Spaghetti Incident?” album. Axl Rose and Dan McCafferty became friends, and he asked Dan to sing at his wedding. Unfortunately, Nazareth were in the middle of a world tour at the time.

“Axl is a big fan of the band Nazareth, especially Dan. He and Dan were good friends. When we played in the early days, we had six shows in California, and they came out to everyone of the shows. They were just really young guys, and big fans. Eventually they became huge. Axl would have liked Dan to sing “Love Hurts” at his wedding. There were talks of it, but we were on tour. We were in the middle of a big world tour, and no way. A story starts, and grows legs, that’s one of those stories that grew big long legs. Axl just kind of mentioned it one time to Dan, it would be really nice if you could come and sing. Unfortunately we were in the middle of Siberia or Russia at the time. It was just impossible to be there. We’re still really good friends. We recorded a couple of years ago and Guns and Roses were playing. We went and seen them, and partied with them after. We’re still good friends,” Pete Agnew replied.

According to Pete Agnew, so much has happened with Nazareth over the years, that there is no one single memory that stands out. What really stands out is the fact that he’s been doing this for 50 years.

“There are so many things that have happened on this tour, let alone the last 50 years. When I look back, I can’t believe I had 50 years of doing this. That is the single thing that stands out. Because there are probably a million things that happen when you tour in a rock band. You hear all the stories of all the things that happen to bands. Think of all the stories you heard and apply them to Nazareth because it’s all happened to us as well. That’s basically it. The whole thing is a big memory” Pete Agnew recalled.

Canada holds a special place in Pete Agnew’s heart. It was the first place outside of Europe that Nazareth became very successful.

“Canada was the first place outside of Europe that we actually had a hit. It was in North America, and it was in Canada, and that was always really special. The thing is with Canada, we have 8 platinum or gold albums from Canada alone. It’s by far the country that bought more records per head than any other country in the world, and we do very well in other countries. Canada just seemed to take to Nazareth, and Nazareth took to Canada in the same way. It’s always been very special for us, and it still is. It might not be a huge tour, but we’re doing 12 shows here, and next year we’re already booked for festivals here in August. Canada, other than Germany, is the country we go to every year neither what,” Pete Agnew remarked.

However, it’s been years since Nazareth last played the Nation’s Capital.

“It’s been a while since we played in Ottawa. It’s been many years. We’re looking forward to seeing them all again. In fact, I don’t know if it will be the same people who seen us then. What we’re finding these days is the first 15 rows, they are all very young, and they weren’t here the last time. I’m looking forward to seeing them all,” Pete Agnew stated.

Fans can expect to hear a lot of the Nazareth hits on July 31st in Ottawa.

“You got to play the hits Jason, if we don’t play the hits, people will want their money back, and I don’t blame them. You don’t expect to see Deep Purple and they don’t play “Smoke on the Water”. About 60% of the set is already picked, especially in Canada. The biggest selling album here is the Greatest Hits, and that speaks for itself. We’re going to be playing a lot of the things off that. We do have other songs. We have 23 albums. Everything we play in the set is a hit some place. All the songs we play are very well known Nazareth songs, and I don’t apologize for that,” Pete Agnew concluded.

For all the Nazareth fans that will be in attendance, no apologies necessary. It’s going to be a fantastic and wonderful concert.

The show is being presented by The Brass Monkey in conjunction with Spectrasonic. The Bushpilots and Red Light Saints are opening for Nazareth. The show starts at 7pm and is 19+. Tickets are $45, but the show is sold out. Check the Facebook event page in case a few tickets become available.