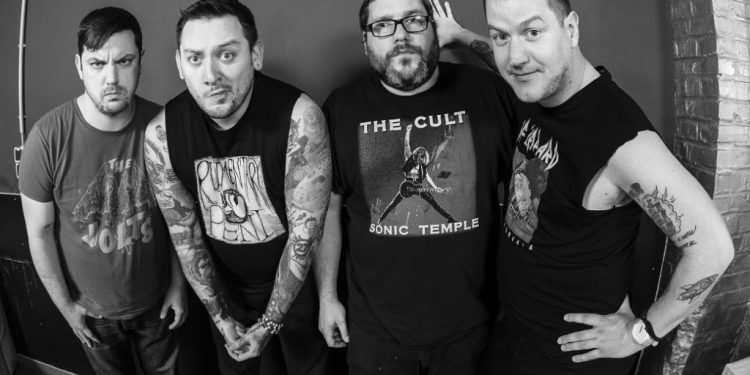 “We recorded 16 songs in total. The extra two will be coming out on a 7″ the same day as Stealing The Covers,” Ray Carlisle explained.

Songs on the album include: “Shit, F-ck, Goddamn” by Artimus Maximus, “The Way I know” by the Varsity Weirdos, “I Kill Butterflies” by Onion Flavored Rings, “Alien Motion Technology” by the Mugwumps, “No Hugging No Learning by Head, and “RoboCop is a Halfbreed Sellout” by Sprocket Nova.

What was the most challenging part about covering other band’s songs?

“Finding which key signature to move to. We needed to make sure the song would fit me or Kody’s voice so it was a little challenging moving the key around. Kind of – not really though. We were all like, “let’s try it in A”, “uhh, that works”. We moved the tempos around a bit too. It wasn’t very challenging either. To answer your question, the most challenging part is we didn’t really practice at all and we weren’t prepared,” Ray Carlisle admitted.

Why release an album of cover songs?

“We have been talking about doing this for a while now. I think Brandon came up with the idea. It just made sense to make this the first recording project without him around,” Ray Carlisle replied.

Will there be a tribute song for Brandon?

“It’s impossible to write a song and not think about Brandon. Would Brandon like this? What would Brandon think? In that vein, every song will be a tribute to Brandon. The last song he ever played drums on is on the Ray Rocket record entitled “First Time”. This song wasn’t meant to be a tribute to Brandon but it turned into that after his untimely death,” Ray Carlisle reflected.

Is continuing with the band a way to pay homage to your brother?

“If I had a penny for every time Andrew Berlin clicks the mouse I’m pretty sure I could at least get a number 5 at Taco Bell. Dude eats a lot of snacks at the console, but he’s the best engineer in the world,” said Ray Carlisle with a grin.

The new album marks the bands return to Fat Wreck Chords after a successful stint on Rise Records. What does it mean to be back on Fat?

“It means we get the Fat logo on the back of the record. It means I get to bug Chad and Bart at the office. It also means I get to hear the Nofx song, “You’re on Hold”, said Ray Carlisle with a chuckle.

Teenage Bottlerocket have toured with Nofx, the Mighty Mighty Bosstones, Me First and the Gimme Gimmes and others.

“My favorite band I have ever toured with is called Wonk Unit. My favorite tour story was the time I bumped into Steve Caballero and Tony Alva at the airport in Japan. Legends,” Ray Carlisle reminisced.

Both are famous skateboarders, and Tony Alva was one of the original Z-Boys.

To promote the new album, Teenage Bottlerocket will be back on the road again.

Before touring they coordinate schedules with The Lillingtons, because Kody Templeman of Teenage Bottlerocket is also in The Lillingtons. Ray Carlisle is a big fan of Kody’s other band.

Teenage Bottlerocket will touring around the world, including stops in Europe and Australia this summer.

What are you looking forward to most about the upcoming tour?

“Just kicking it on stage with the dudes. Playing music with my best friends. Australia is going to be bad ass, looking forward to good hangs with Frenzal Rhomb and the Decline,” Ray Carlisle concluded.

Pick up the new album here.

From Lawbreaker to Lawmaker, MP Lauzon Unveils his Autobiography