by Editorial Board
in Arts and Culture, News and Announcements
Reading Time: 2 mins read
91 2 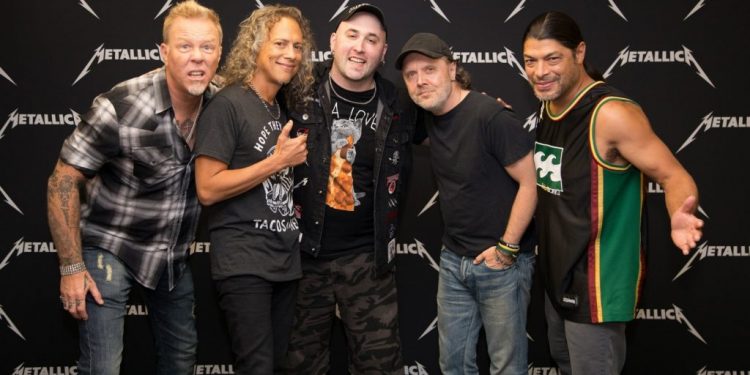 “On Sunday, July 16th, Metallica played to a sold out show at the Rogers Centre in Toronto. Aside from being their first North American trek since 2009, the band was also offering Experience Packages. Out of the 50,000 fans in attendance, only 12 were lucky enough to buy a Hardwired Experience. I was one of those 12. At a mere $3,300 dollars, instead of back packing through Europe or sitting on a beach in Australia for a week, I decided to fulfill my life long dream of meeting my favourite band and all the experience had to entail.

I started listening to Metallica at the age of 14. By the time I was 15 they were my go to band. What can I say? For myself, there was a song for every occasion, experience and moment of my life. I constantly related to their music. Be it that classic thrashy sound from the 80s, their bluesy hard rock from the mid 90’s or the brutality that is St. Anger, I’ve stuck by this band and still do. Music has always been my greatest passion and for myself, Metallica delivers on all fronts.

Having seen the band live 8 times previously, this show was like no other. It was bigger, louder and of epic proportions. The stage alone took 3 days to set up accompanied by a laser show that took 640 human hours to program. Showcasing 5 songs from their latest release, the 8 time Grammy award winners relied heavily on their back catalogue that built their fame. Complete with more pyro and fireworks than a Canada 150 celebration, old and new fans were head banging to the likes of “Master Of Puppets”, “One” and “Sad But True”. Playing 18 songs over 2 hours and 15 minutes, the 3 song encore included the deep cut of “Blackened” and fan favourite “Nothing Else Matters”. The quartet would end the set with the radio staple “Enter Sandman”.

While the show was phenomenal, it was the behind scene events prior to that contained the true magic. The memorabilia museum featured display cases consisting of hand written lyrics, awards and framed platinum records. However, it was posing with and playing the actual guitars of Kirk Hammett (lead guitar) and James Hetfield (rhythm guitar/vocals) that was truly spectacular. The only thing that could bring things to the next level would be a one on one with the band. The words to describe meeting one’s idols are far and few in between. I am still speechless on how humble and real the members of Metallica are in person. Fame aside, they are just four guys living life their way.

The entire day was certainly a once in a lifetime experience I won’t forget until the day I die. While one might say I’m crazy, the truth is I’ve always been Hardwired for Metallica. Nothing Else Matters”.

For more information on the band visit their Facebook page.