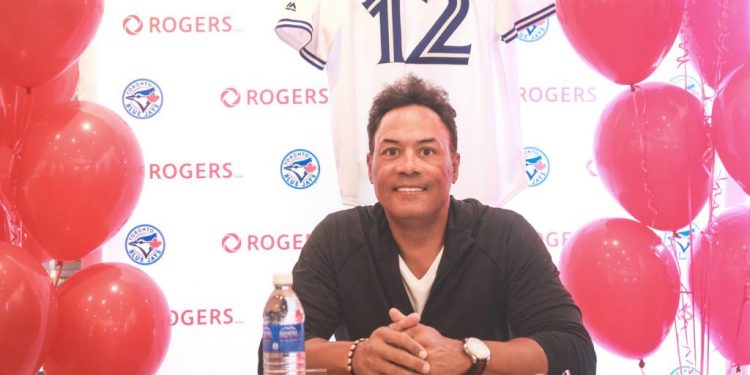 His visit to Cornwall brought back a lot of great memories for Blue Jays fans. In 1990 the Toronto Blue Jays rocked the baseball world by trading Fred McGriff and Tony Fernandez to the San Diego Padres in exchange for Roberto Alomar and Joe Carter. Both players would become instrumental for the Toronto Blue Jays who won back to back World Series Championships in 1992 and 1993.

In Game 6 of the 1992 World Series Roberto Almoar scored what would become the winning run of the World Series off a two-run double by Dave Winfield in the 11th inning. The Toronto Blue Jays made history becoming the first Canadian team to ever win the World Series.

What made the 1992 and 1993 Blue Jays so special? According to Roberto Alomar, the answer is simple, the fans and the players.

“I think the fans made it special. We had a great team and great ball players – and I think we played the game the right way,” said Roberto Alomar.

Roberto Alomar, who wore #12 on his jersey, was a 12 time All-Star. He also won 10 Golden Gloves, more than any other second baseman in Major League Baseball history. It’s no surprise that Roberto Alomar was inducted to the MLB Hall of Fame soon after he was eligible.

For Roberto Alomar, being inducted to the Hall of Fame honours both his heritage and his homeland.

“It’s a dream come true for any player to be inducted into the Hall of Fame. For myself, coming from a small town from Puerto Rico, it’s an honour. Especially representing the Lations and the Puerto Ricans and also the Canadians. It was an honour for me,” Roberto Alomar reminisced.

In 2011, the same year he was inducted to the Hall of Fame, the Blue Jays retired Roberto Alomar’s number 12.

His long and successful journey to back to back World Series championships and a Hall of Fame career began at home.

Roberto Alomar grew up in a baseball family. His father “Sandy” Alomar, Sr., and his older brother Sandy Jr. also played in the Major League. He learned a lot about the game from his father growing up.

“The most important lesson I learned from my father about the game of baseball is that if you want to succeed in this game, you got to love what you do everyday and enjoy what you do and you will succeed,” Roberto Alomar explained.

“It was amazing for me, playing little league with my brother, being able to make that dream come true, to play in the big leagues, it was an amazing experience. Those are the times you will remember for the rest of your life,” Roberto Alomar reflected.

Roberto Alomar’s love and dedication to the game of baseball is obvious. Even after his retirement as a player, he stays close to the game. Roberto Alomar is happy to be affiliated with Rogers, a company that generously donated $10 for every autograph he signed to the the Children’s Treatment Centre in Cornwall.

“I always like to be affiliated with the Rogers family. They are a great organization, they have some great programs, and I’m so glad to be apart of the programs,” Roberto Alomar added.

Hundreds of Blue Jays fans waited in line at the new Rogers store to get an autograph. Fans brought baseballs, sports cards, jerseys, hats, posters, photos, and other memorabilia to get signed.

Fans were impressed by the kindness of Roberto Alomar, and courtesy of the Rogers staff.

“Roberto Alomar and the Rogers Store staff were extremely welcoming during the event. Mr. Alomar even made an effort to make small talk. The ball he signed for me is a reminder that anything is possible,” said Blue Jays fan Nick Moise.

“It’s not too often that a fan gets to meet a hall of fame baseball player. Cornwall is ever growing, and having athletes (other than hockey players) come to town is a nice change and wonderful opportunity. I hope more events happen like this in the future,” long time Blue Jays fan Hannah Ward commented.

“I didn’t watch a lot of baseball growing up but I’m a fan of the Blue Jays now for sure and I try my best to make it out to a few games each year with some close friends. It was an honour meeting Roberto Alomar. He’s very considerate and polite”, Jeffrey Newton added.

“Having Hall of Famer, and former Blue Jay, Roberto Alomar visit Cornwall was certainly a special event for the City. It was made even more special by Rogers’ generous donation of $10 per autograph to the Children’s Treatment Centre,” Justin Towndale concluded.

The new Rogers store is located at 1225 Brookdale Avenue in Cornwall Ontario.