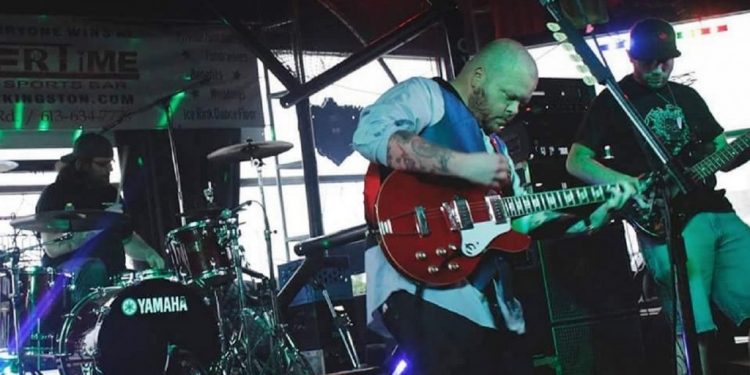 Cornwall Ontario – Capital region blues-folk-punk rock band Project Mantra are returning to Cornwall on Thursday, July 27th for a very special CD release party and showcase at the storefront of local businesses Smoke On The Water and Think Tattoo Studio.

The band has a refreshed lineup, consisting of longtime members Leigh Bursey (vocals and guitarist), and Justin Steacy (drums), new guitarist Steve Hamilton, and Cornwall’s own Mike Paquin on bass and backing vocals.

“Working on this record was a blast, as it marked the first transition into the modern Mantra that you see and hear today,” explained Paquin, who is also the owner of Smoke On The Water.

Featured on two tracks on their sophomore release ‘Moonlight Over Vagabond,’ Mike Paquin was eager to share his enthusiasm. “I enjoyed lending hip hop elements to the track ‘The Seven Minute Sleep’ with my featured verse, and I really enjoyed getting back to my roots of blues/punk rock guitar on the track ‘EPC.’

“This show will be my first official onstage appearance in Cornwall as part of the Project Mantra lineup, and I’m enjoying every minute of it. I look forward to showing The ‘Wall what we have and why you should be listening to us. It will be a great night of entertainment,” continued Paquin.

Longtime Project Mantra frontman and Brockville’s punk rock councillor, Leigh Bursey also shared his excitement. “We are sharing the stage with some very talented local bands, we have worked very hard to bring some fresh and exciting to the mix for 2017, and the momentum is behind us. Publications like The Cornwall Seeker Newspaper and radio shows like DCN’s ‘Pretty Cool Records Show’ have been incredible to us in terms of helping to get the word out and build a base of support. Our song ‘Scream For Me’ has really taken off, and this album is very autobiographical. I’m excited for the world to hear it, just as our new lineup is excited to keep moving forward.”

Known for their sometimes eccentric theatrics, hard hitting emotional lyrical delivery, and their fusion of styles and sounds, this is a show you do not want to miss.

Project Mantra have shared the stage with Madchild, illScarlett, Aaron Pritchett, Hawthorne Heights, Auras, and many others.

Check out Project Mantra on July 27th along with Fathom Sound, If It Blooms, and T-Rex Marathon. The show starts at 6pm. Advance tickets are available now at Smoke On The Water, 1215 Pitt Street for $8 or $10 at the door.