The Book Nook: Review of The Stars in Our Eyes by Julie Klam 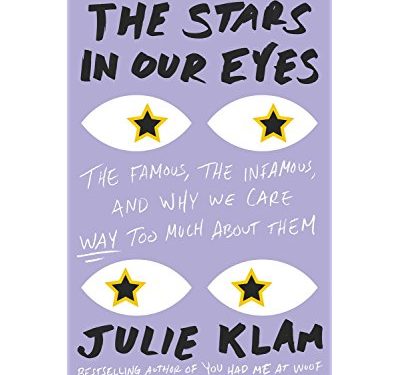 Do you ever catch yourself browsing Perez Hilton’s website, watching Entertainment Tonight, liking a celebrity selfie, or gossiping about the latest Hollywood breakup? In the funny and heartfelt The Stars in Our Eyes, New York Times-bestselling author Julie Klam examines what it means to be famous and why modern society is so obsessed with celebrities.

The notion of celebrity today is vastly different from what it was in the past; as Klam notes, celebrity was once “Julius Caesar and Cleopatra” and now it’s “some woman on Instagram who does nude yoga and has 3.5 million followers.” This collective obsession with frivolity and hollow talent can be interpreted as tragic. As Alec Baldwin stated in 2015, society’s fixation on celebrities is “tragic in the sense that it is so clearly a projection of people’s frustration about their government, their economy, their own spiritual bankruptcy.”

However, Klam argues for a different interpretation of our constant consumption of celebrity news. Her premise of the book is that “if we more clearly understand celebrity, if we can get a handle on our relationship to celebrity, we can better understand ourselves.” In this search, Klam interviews various celebrities about their experience of being famous, includes numerous accounts of celebrity encounters from “normal” people, and examines all aspects of celebrity from child actors to sports stars.

She concludes that celebrities act as a mirror for ourselves: our potential best selves that are more beautiful, talented, and successful. This also explains why we are so disappointed (and fascinated) when celebrities display reckless, immoral, or even criminal behavior.

But when it comes right down to it, the real value of celebrity culture is escapism. Watching or reading about celebrities is a way to escape the mundane, and “for those moments when we are with them–in a theatre seat, at the ballpark, at a concert–we can take a break from being us, too. It doesn’t last forever and may not be a lot, but sometimes that’s enough.”

The Stars in Our Eyes (released July 18, 2017) is available at The Cornwall Public Library and online.

Agree to Disagree: Houston, we have a problem