Interview with The Lucky Ones – New Album out Sept 1st 2017 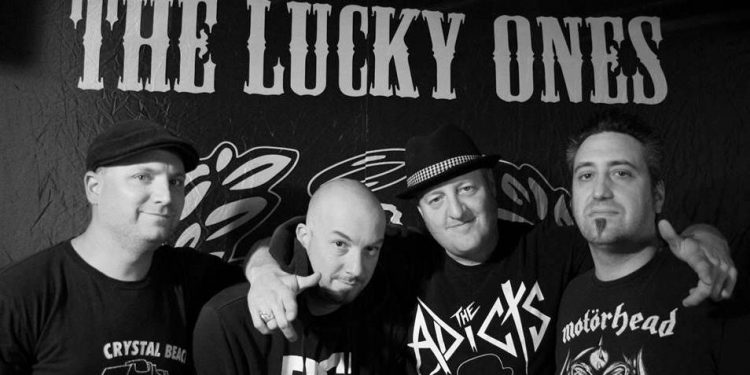 “Well this is our third full length record since 2010, but our first since 2012. It’s a collection of 10 songs we had written for this record. 2 songs we did with Shohei from Samurai Attack from Japan. Plus 2 songs we had recorded for tribute albums. So 14 songs in total and I think it turned out pretty damn good! Steve and Reiss at Drive Studio’s did a great job,” Steve Stumble said.

The reason there was a five year gap between albums is because life happens sometimes – namely kids, marriage, moving, and switching jobs – so better late than never!

“Life happened basically. Rob, our bass player had 3 kids over this time. Eric and Rob also got married. We had people moving and people switching jobs, etc…. Getting us all together ‎at the same time just became very difficult. Not to mention getting us all in the studio at the same time, and then when we could, it didn’t fit into the studio’s time. So the record literally took four years to record. Which is way too long! I would not want to go through the process of this record again. Next time it’ll be quick – in and out!,” Steve Stumble stated.

Steve Stumble’s personal favourite song off the new album is the one that he collobrated on with a long time friend.

“My personal favorite is “Old School Punk Rockers”, which is the last song on the record. I collaborated with my long time buddy Mike McNeil in this song and he does a brilliant spoken word piece during the breakdown in the song. We’re shooting another video for this song also,” Steve Stumble disclosed.

The song “Old School Punk Rockers” was also featured in Season 5, Episode 3 of the television show Orphan Black which airs on Space and the BBC.

The Lucky Ones have played many festivals over the years including D-Tox Rock Fest, Canadian Music Fest, Koi Fest, Rebel Fest, and SCENE Music Festival. Steve Stumble explains his favourite festival to play and why.

“My favorite festival I would have to say was D-Tox Rock Fest. Only because we had an RV for that festival and it was awesome to have our whole crew all together‎ on a fun road trip instead of being crammed in a van or truck! Nothing against the other festivals they were all great also, but being in the RV really made Rock Fest a lot of fun,” Steve Stumble explained.

The Lucky Ones have also shared the stage with bands likes Stiff Little Fingers, The Forgotten Rebels, The Bouncing Souls and NOFX. Steve Stumble explains his favourite band to share the stage with and why.

The Lucky Ones are going to be touring Ontario soon, and their live show promises to be a good time!

“Come on out and have a good time! Leave the politics and drama at home. There are a lot of shitty things going on in the world right now. So let’s have some fun and be good to each other! Thanks again ‎for all the love and support throughout the years! Cheers and see ya at the gigs,” Steve Stumble concluded.