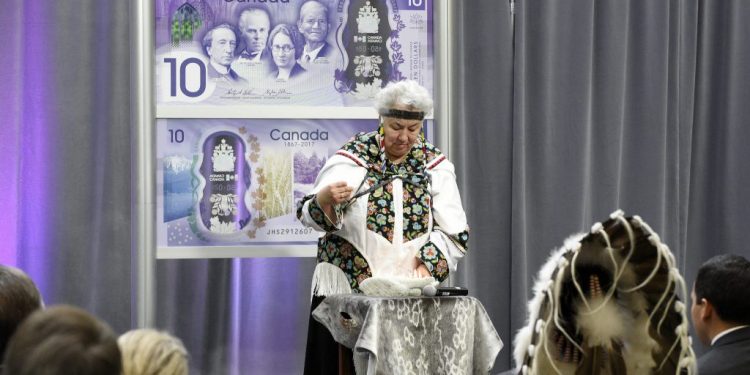 The Canada 150 bank note celebrates Confederation with a unique design depicting our history, land and culture. Tightly woven into our history, and the story told on this special note, are several elements depicting Indigenous traditions and culture.

In addition to the portrait of Senator James Gladstone, who represents the role of Indigenous peoples in government, the Canada 150 note incorporates the artwork Owl’s Bouquet by acclaimed Inuit artist Kenojuak Ashevak and the distinctive Assomption sash, an important cultural symbol of the Métis people.

James Gladstone or Akay-na-muka (his Blackfoot name) was a member of the Kainai First Nation (Blood Tribe). In 1958, he became Canada’s first senator of First Nations origin. He is also the first Indigenous person in Canada to appear as a portrait subject on a Bank of Canada note.

Gladstone committed himself to the betterment of Indigenous peoples. At the time of his appointment to the Senate, he, like all Status Indians, did not yet have the right to vote. He advocated for this right, which was won in 1960, when the right to vote was extended to all Indigenous Canadians. He also advocated for improved education, economic opportunities, equality and greater self-determination for Canada’s Indigenous peoples.

Gladstone served in the Senate until 1971, the year of his death. A bronze bust of Gladstone is displayed in the antechamber to the Senate in the Centre Block of Parliament Hill. It shows him wearing a feathered headdress and acknowledges his significant contribution to the Senate and to Canada.

The distinctive pattern featured across the top and bottom of the Canada 150 note is based on the Assomption sash, also known as the arrow sash. The long, finger-woven sash, most commonly worn tied around the waist, is part of a tradition integral to the history of Canada. Colourful sashes were worn by French-Canadian habitants and became a hallmark of the voyageurs and fur traders, who carried them westward at the end of the 18th century.

Traders from the Hudson’s Bay and North West companies regularly offered the sashes as gifts to First Nation peoples, with whom they became popular adornments. Since then, the sash has become an important cultural symbol of the Métis people and is the centrepiece of the “Order of the Sash” ceremony, during which a sash is presented to an individual in appreciation of a significant contribution to the Métis nation.

In the large window on the Canada 150 note is a metallic image based on Owl’s Bouquet, artwork by Kenojuak Ashevak (1927–2013).

A member of the Order of Canada, Ashevak is perhaps the best-known Inuit artist. She lived and worked in Cape Dorset, Nunavut, the last territory to join Confederation in 1999.  Her work, which helped introduce Inuit art to the world, was produced in a wide variety of media, including drawings, prints, sculptures, textiles and even stained glass. Ashevak’s distinctive artwork has been featured on Canadian stamps and coins but never before on a bank note.

Ashevak’s work was chosen for the Canada 150 note for its great aesthetic and security value—the owl lends itself perfectly as a metallic feature.

Ensuring that bank notes reflect Canada and our diverse society, culture and achievements is integral to the Bank’s formalized principles for bank note design. These principles now serve as the foundation upon which visual content (theme, subject matter and images) is developed.

Visit www.bankofcanada.ca/banknote150 to learn more about the design and security features of the Canada 150 note. Follow the Bank on Twitter (@bankofcanada) for the latest news about this special note marking the 150th anniversary of Confederation.