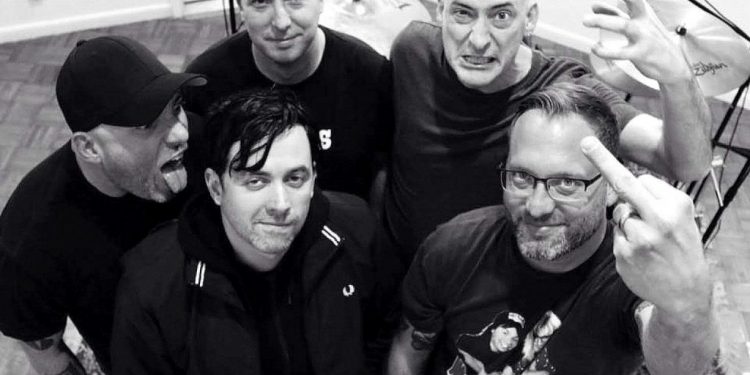 Ottawa Ontario – The Riptides new album “Canadian Graffiti” has been getting fantastic reviews, including on Punknews.org, since it’s release earlier this month.

The album can be streamed on services like Spotify and Google Play, and a vinyl copy of the album can also be purchased online here.

A music video for the song “Goodbye Hawaii”, off The Riptides album “Canadian Graffiti”, was just released and can be viewed on Youtube. It was directed by Petr Maur,

Over the span of their career The Riptides have shared the stage with many notable punk bands including The Queers, The Dickies, Subhumans (UK), Circle Jerks (featuring the bass player of Bad Religion), Groovie Ghoulies, Chixdiggit!, Dwarves, The Mr. T Experience, The Donnas, Frenzal Rhomb, The Methadones, and Moral Crux.

Dan Lumley is best known as the former drummer of Screeching Weasel. He also drummed for numerous other punk bands and noteworthy musicians.

His journey to stardom started at the age of 13 when his parents bought him his very first drum kit.

“My first drum kit was a Tama Swingstar that my parents bought for me when I was 13. It did not include cymbals, so I saved my money from my paper route and gradually added cymbals. At the time I was playing along to Kiss and Quiet Riot, cranking a jambox as loud as it could go and playing along to it. I’m sure my parents started to regret their purchase quickly,” Dan Lumley said with a smile.

Although Dan Lumley is best known for being a punk rock drummer, growing up he mostly listened to metal music. He discovered punk bands like the Ramones and Misfits a bit later in life.

“I listened to mostly metal growing up, but I did listen to some punk too; bands like Toxic Reasons and Zero Boys. Later I discovered Ramones and Misfits, but not as a teenager. The drummers that most influenced me were Peter Criss, Eric Carr, Tommy Lee, Charlie Benante, Lars Ulrich, Sim Cain, Will Calhoun, Carmine Appice, and of course I loved Neil Peart,” Dan Lumley divulged.

About ten years ago Dan Lumley joined the Riptides thanks to the suggestion of former Screeching Weasel band mate Mass Giorgini.

“I joined up with the Riptides through Mass Giorgini. He contacted me and asked if I’d be interested in recording with them. It sounded like fun, so I ended up playing on the album “Tales From Planet Earth,” which turned out really great! My all-time favorite Riptides song, Dial M For Murder, is on that album,” Dan Lumley replied.

However, Dan Lumley’s favourite song off the new album is “Eyes Wide Shut”.

“My favorite song to play from the new album is probably Eyes Wide Shut. I like the fast, ballsy ones,” Dan Lumley noted.

The artwork on “Canadian Graffiti” was done by Archie Comics artist Dan Parent who also did artwork previously for the Ramones and Kiss.

“I think the artwork is great, and I’m honored to play on an album that has such an awesome cover!,” Dan Lumley disclosed.

Dan Lumley was the drummer for Screeching Weasel between 1997 and 2005. During his time with the band they recorded three full length studio albums. His favourite was titled “Teen Punks in Heat”.

Dan Lumley recounts his experience working along side Ben Weasel in the studio, but he laments not going on more extensive tours with Screeching Weasel during his time in the band.

“I never really toured with Weasel, but I did play and handful of shows. I wish we had played more live when I was in the band, because it was awesome to play for huge, appreciative crowds like that! In the studio, Ben is more easy-going that people probably think. He usually told me to play what I thought was appropriate, then if he had any additional ideas, he would let me know. I remember on the song Molecule, he suggested that stiff, regimented drum part, which I would not have thought of doing,” Dan Lumley recalled.

“I though the “Short Music” comp was cool! I did notice that some CD players and computers freak out on a CD with that many tracks, though!,” Dan Lumley said with a chuckle.

In addition to Screeching Weasel, Dan Lumley worked with Mass Giorgini in Rattail Grenedeir, Common Rider, and Squirtgun. They’ve been playing together for over 30 years now!

“Mass is like a brother to me. I’ve known him and (his brother) Flav for most of my life and we’ve played in bands together for over 30 years now,” Dan Lumley replied.

While in Squirtgun, the song “Social” was featured in the Kevin Smith film Mallrats.

“It was awesome having Social in “Mallrats!” Our local theater (in Lafayette, IN) had us play a show the night the movie premiered, so the movie was shown right after we played. And the next day we left for a tour. I felt like we were on our way up for sure!,” Dan Lumley commented.

“I was honestly not familiar with Operation Ivy’s music before working with Jesse Michaels. I had heard of the band, of course, so I was honored to be chosen as a possible member of Common Rider,” Dan Lumley said.

Billie Joe Armstrong of Green Day was a featured guest on the Common Rider EP titled “Thief In a Sleeping Town”. However, Dan Lumley didn’t drum on that album.

“I didn’t actually play on the “Thief In A Sleeping Town” EP; that was Dan Panic. It was someone else on bass other than Mass as well. That one was done just with Jesse’s pals in the Berkeley area. I have met Billie Joe a few times, though. He’s a really great guy,” Dan Lumley pointed out.

Dan Lumley was also in The Mopes, and later The Methadones, with Dan Vapid (who played in The Queers, The Riverdales, and Screeching Weasel).

“Dan Vapid is a great guy to work with! He’s laid back, funny, easy-going, incredibly talented, and fun to be around. The same can be said for Jughead and B-Face. So it was a great experience doing Mopes recordings. I only played live with them a couple times, but that was fun as well,” Dan Lumley mentioned.

In addition to being a punk rock drummer, Dan Lumley is also an engineer and drum technician. He worked at Sonic Iguana Recording Studio.

“I worked at Sonic Iguana from 1996 until 2001. It was a great experience and I learned a lot about listening to music. It was also cool to work on so many great albums. I engineered on classic albums from Lillingtons, Teen Idols, Groovie Ghoulies, Anti-Flag, Rise Against, and many more,” Dan Lumley said.

Talking about Rise Against, is it true you were briefly a member of Rise Against in 2000? If so, what can you tell us about that.

“The Rise Against story is this: I drove to Chicago one day in 1999 to Dan’s house (the original guitar player) to help them audition a singer, as they didn’t have a drummer at the time. The singer they auditioned that day was Tim, the guy they still have. Before he got there we arranged a new song and did a quick demo of it so he could sing on it, and we also played the song together live. I think it was an early version of a song from the first album. Anyway, they offered him the singer spot that day, and they also offered me the drummer spot. I was already in three other active bands (Screeching Weasel, Common Rider, and Squirtgun), so I declined. Oops!,” Dan Lumley concluded.

Be sure to stream or purchase a copy “Canadian Graffiti” by The Riptides. It’s an amazing punk rock album, and you won’t be disappointed.

Battle of Glengarry  War of 1812 Reenactment