The Book Nook: Review of The Alice Network by Kate Quinn 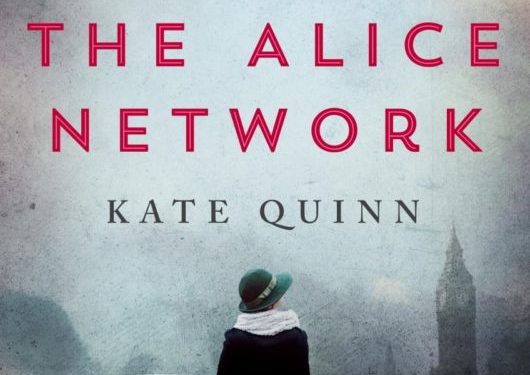 The year is 1915, and young Londoner Eve Gardiner is recruited to work as a spy in enemy-occupied France. She is incorporated into the Alice Network, a far-reaching and talented web of female spies working to end the Great War, run by the fierce and fearless Louise de Bettignies (code name Alice). Thirty years later, American Charlotte St. Clair hunts Eve down looking for help in finding her cousin Rose who disappeared during World War II. In The Alice Network, author Kate Quinn deftly intertwines these two narratives of strong women who must strive to find their place in a war-torn world that thinks them incapable and powerless.

This compelling and breathtaking work of historical fiction is based on several historical figures from WWI, most notably Louise de Bettignies and her spy network that provided invaluable information to the Allied forces at considerable danger to themselves. Yet Louise’s bravery was boundless. When asked if she was ever frightened during her treacherous work, she replied “Yes, just like everyone else. But only after the danger was past; before then it is an indulgence.”

Eve names this coterie of fearless females “les fluers du mal” after Baudelaire’s famous volume of French poetry. As Eve states of The Alice Network, “We are not flowers to be plucked and shielded. We are flowers who flourish in evil.” And it is very lucky for the Allies that they did. As a member of the British Intelligence said years later when speaking of Louise’s service, “Possibly, during the course of the war…one or two services equaled hers. Not one has ever surpassed it.”

As with the recent Wonder Woman movie, Quinn examines WWI through a modern feminist eye, portraying both women’s struggles at that time and their triumphs. For more info on Louise’s war work, see the memoir La Guerre des Femmes: The Story of Louise de Bettignies by Antoine Redier, husband of Alice Network member Leonie van Houtte.

The Alice Network (released June 6, 2017) is available in paperback at Coles in the Cornwall Square, the Cornwall Public Library, and online.

Inquiries and comments may be sent to cornwallbookreview@outlook.com.