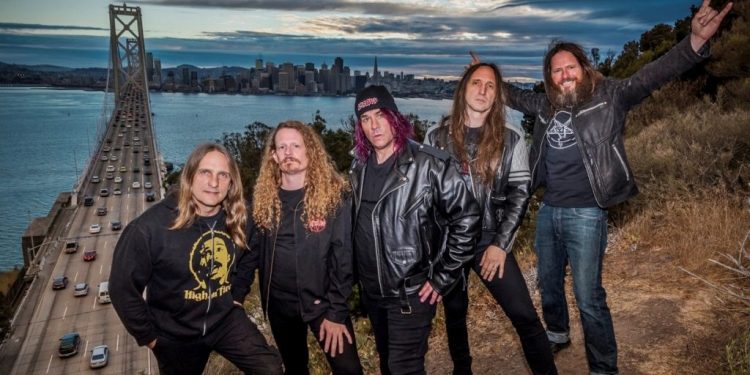 Guitarist Kirk Hammett and drummer Tom Hunting formed Exodus in 1980. In 1981 Kirk Hammett taught Gary Holt how to play guitar, and he joined the band soon after that. In 1983 Kirk Hammett departed from Exodus and joined another band called Metallica.

Guitarist Gary Holt, who has been a member of Exodus for 36 years, recounts meeting Kirk Hammett in high school.

“We met in my high school music room, Exodus played there, the other guitarist was a student. We ended up going to see Ted Nugent and The Scorpions together, and became close friend right away. From there, he maybe saw something in me, thought I could learn and be that new guitarist in the band. Six months later, I joined the band – in 1981 I believe,” Gary Holt recounted.

Gary Holt, who joined Exodus at 17 years of age, discovered a lot of great metal music during his formative years, and it shaped the person he became.

“I joined at 17 years. We just had a blast, it was all about the music, and we discovered a ton of great metal together, bands that shaped who we became,” Gary Holt recalled.

Tell us about your working relationship with Exodus drummer Tom Hunting. Have you ever worked with anyone longer in a musical capacity?

“Not even close, him and I have been playing together since I picked up a guitar to play my first song with Exodus, and will continue to do so until I can no longer play. After all the years we’ve been together, you develop your own language. And there’s only two people on earth who truly speak it,” Gary Holt divulged.

In a few years Exodus will be celebrating it’s 40th anniversary. Are there any special plans for that? A new album? A world tour? Anything like that?

“All of the above. It’s amazing how long this band has been together, 1979 this thing began! I guess we just made the cut of being a “70’s” band,” Gary Holt mused.

“Bonded by Blood is my favourite album of course. My favourite song would maybe be “No Love”, there’s just so many killer musical movements in that song, and it’s one of the first written for Bonded by Blood,” Gary Holt responded.

Bonded by Blood was their first studio album, and it was released in 1985.

Exodus have ten studio albums in total. Their latest album, “Blood In, Blood Out”, was released on Nuclear Blast in 2014 and reached #38 on the Billboard 200.

In your songwriting, do you consider some of your lyrics as being atheist or anti-Christian?

“Both. I am an atheist, and I am anti-Christian, although I am well aware some of the people who I care the most about are believers. But I get angry when Christians talk like there’s an assault on the religion going on, when truthfully, you can’t swing a dead cat without hitting a church pretty much anywhere on earth,” Gary Holt replied.

In addition to playing guitar with Exodus, Gary Holt has also played with Slayer. In 2011, he temporarily filled in for Slayer guitarist Jeff Hannema.

Of course Gary Holt is a fan of Slayer, but he wasn’t star struck joining the band. These are musicians that he has known for most of his musical career.

“We’ve been friends for most of our musical lives, so it wasn’t a situation of joining a huge metal band for me, it was jamming with old friends,” Gary Holt pointed out.

In 2013, after Jeff Hannema passed away, Gary Holt filled in on guitar for Slayer again – touring and also recording guitar solos on the album Repentless. Recording with Slayer was very different than recording with Exodus.

“It’s very different. With Exodus I am pretty much there for the entire process. With Repentless (for Slayer), I came in, did my solos in a day, and went home, It was a very easy recording for me,” Gary Holt surmised.

What is your favourite song off the new Slayer album?

“I like “You Against You” probably the most,” Gary Holt stated.

Gary Holt also endorses ESP Guitars, and he uses a signature version of the Eclipse model.

“Yes I use ESP guitars exclusively, best guitars I have ever played or owned, bar none,” Gary Holt pronounced.

In 2008, Gary Holt released a music video titled “A Lesson In Guitar Violence” that went viral on Youtube.

Have you ever considered a sequel to that video?

“I am most likely going to start work on a new instructional DVD later this year,” Gary Holt said.

“Be there or die,” Gary Holt concluded.

Doors are at 6pm, the show starts at 7pm, and tickets are $30-$35 each and available online at Ticket Fly.

From my Pantry : A cake for adults only