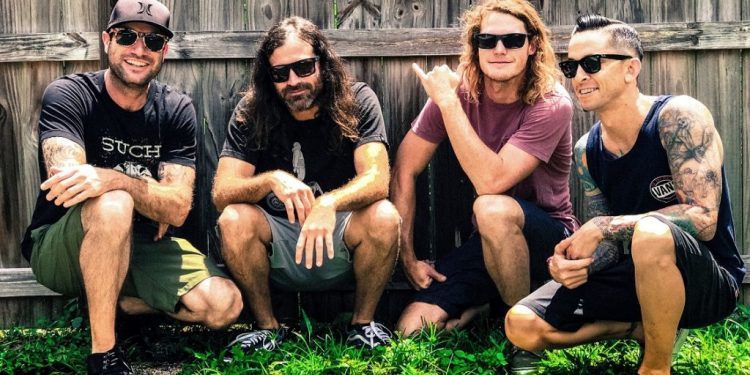 Ottawa Ontario – Sled will be joining 88 Fingers Louie, Belvedere, and Such Gold, when The Bird Attack Records Tour reaches Ottawa on Friday, October 6th for a concert at the Brass Monkey.

“The current line up is going to be Mike Fitzgerald on vocals, Matt Phillips on guitar, Mark Mchone on bass, Kyle Helm on drums – and myself,” SLED guitarist Garrett Wadford said.

Punk band SLED, formerly known as Pinhole Down originated in Florida. A member of legendary punk band Guttermouth is associated with SLED.

“Just before I started the label I had started a band, then without a name, but later called Pinhole Down. But with Jacksonville Beach, Florida being slim pickings for available punk rock the line up had changed a bunch with me being the only constant. After we did a few tours, including one with Guttermouth, I took some time off to work on the label and the podcast, I guess that’s where my passion was.

A couple years ago after the label was in full swing and having some extra time I reached back out to a few of the original guys and a few new ones. Justin from Guttermouth actually wrote most of the drums and lead guitar section). We decide to hop in the studio (still as Pinhole Down), but the singer and I didn’t see eye to eye and his heart wasn’t in it, so the album was on hold for a year or more. Finally as fate would have it, Fitzy (Mike Fitzgerald) said he was down to have some fun with the band on vox. Fitzy and I were in our first band together called “Endangered Feces”. Catchy, huh? And probably the 325th band to be called that. Anyhow, Fitzy crushed it on vocals on some of our shows we had and I asked him if he was interested in re-writing most of the vocals and lyrics on the songs, he said he was and so here we are.

Justin plays with us from time to time when he can fit it into his schedule away from Guttermouth, but our full time guitarist now is Matt Phillips who we’ll be writing the next album with I’m sure. Kyle, our drummer comes from a band you may have heard of in Cali called 3 Bad Jacks (rockabilly) but he grew up ripping punk and still loves it; the guys a beast! Mark Mchone (bass) recently joined the band and was that missing link we wanted in a shredding bassist but other than that we have a solid lineup of good friends that simply enjoy hanging out together and making tunes, whether it’s punk or it’s just some bluesy riff, we just jam and do our thing,” Garrett Wadford explained.

Back in the 90s,long before SLED, Garrett Wadford was listening to a lot of 90s punk.

“Back in the day it was all Pennywise, Lagwagon, Good Riddance, Face To Face (good ole mid 90’s punk as long as it ripped I was all in! No pop, all rip,” Garrett Wadford stated.

But how did he start playing guitar? In an exclusive to The Seeker Newspaper, Garrett Wadford of SLED shares the story of how he got his first guitar, how he learned to play guitar from his step brother, and the identity of his stepbrother (who later became the singer of a notable nu-metal rap band).

“First time I played guitar was around 5th grade I think; my mom bought me one, and I honestly can’t even recall what kind it was. I remember taking lessons once a week, but I think I gave up because I was (and still am) super impatient, so I shelved the guitar for a few months… (later) my mom had reunited my stepdad and his long lost son. His son and I got along great. The guy skated, loved the same music I did and showed me how to play some basic guitar riffs; he was basically the older brother I never had up to that point. It was pretty damn cool. Fast forward to 7th grade and poof, the guy was gone, total bummer to young nerd like myself at the time… Massive bummer. I didn’t pick a guitar up again until I was about 24 years old.

Here is where the story gets interesting. In the 9th or 10th grade I remember watching MTV; it was during one of those Spring Break party segments with half naked chicks and lame radio bands in Miami jamming on the beach with Pauly Shore. This new band I’d never heard of much, but who formed in my home town of Jacksonville, Florida was playing. As I watched for a few minutes I noticed that the singer was my stepbrother. It was crazy because back then MTV was huge and to see him playing was pretty exciting and at the same time gut wrenching. I was happy to see him blowing up, but pissed that I wasn’t there getting my base coat on with half naked chicks in Miami. So, if you haven’t guessed it yet, Fred Durst of Limp Bizkit is my stepbrother, not many people know about it. You would think I would have used that as inspiration to pick that guitar back up, but no, stubborn ole me wasn’t having it,” Garrett Wadford recalled with a laugh.

Bird Attack Records started as a podcast long before it was a record label. Garrett Wadford explains balancing a label and the band SLED keeps him busy.

“I was on a live radio show for punk locally, and I had named it Bird Attack Punk Rock Radio (same time as the Frenzel Rhomb album Smoko At The Pet Food Factory came out on Fat). I loved that song Bird Attack and it just kind of stuck. From the radio show I decided to start a distro to get the European bands I was playing on the show to the USA market, and that’s how it turned into a label. I was just passionate about getting the music I loved out there. I love staying busy, so whether it’s the label, the band or my vinyl pressing business call Merchant Vinyl I stay busy, but I stay busy surrounded by the thing I love most… music,” Garrett Wadford had reflected.

When SLED arrive in Canada, they’ll be bringing their new album titled “A Better You”. Did Garrett Wadford feel the pressure of creating a great album since he’s also the head honcho at Bird Attack Records (and there are so many great bands on the label already)?

“Totally, I wrote almost all of the songs with guitar riffs and then everyone else sprinkled on their paint. I’m not that good at guitar, so I try to stay ahead of the song writing and riffing as much as possible and let the real musicians help modify a song, riff or direction. I’m truly the weakest link. We spent a lot of time in the studio and wanted a good production but we didn’t want to go overboard. Again, my riffs aren’t the hard part, its basically everyone else that had their hands full. I never wanted to compare us to any band, I just wanted to get an album out that we were proud of and we are. There are so many good bands, super talented bands on our label. I just wanted a good capture of us to try to be at least somewhere in the ballpark of these bands. The songs are fun to play live and people seem to dig it. My cat Spartacus absolutely hates it though,” Garrett Wadford add with a smirk.

“Daryl is a beast. One of the best out there. He is patient and encouraging. Andy was amazing to, more of a phone call / email type of thing with him, but he was really open to our suggestions on the mix and master. I’m proud of what he was able to do with it,” Garrett Wadford divulged.

“I like Connect The Network, it just seems to flow well. Most of these lyrics (for all of the 10 songs) are just random conversations that Fitzy and I would have about random bullshit and I would just write down topics we had discussed because for whatever reason they sparked a flow,” Garrett Wadford disclosed.

SLED will be touring with 88 Fingers Louie, Belvedere, and Such Gold.

“I’m blown away that I get to play with bands that I absolutely love. This tour has 3 of them that I adore. 88 Fingers Louie are legends and great dudes. Belvedere are legends and great dudes also. Steve and I have become damn good friends over the last few years and I joined their tour through South America a few years back. I love all those guys. Such Gold, love these dudes too. I met them in Costa Rica way way back when my old band played the Hopefest with Such Gold, Bane, and Strung Out. We stayed in contact over the years and now I’m just blown away at their performance and song writing skills. The bring the fire live,” Garrett Wadford replied.

This is SLED’s first tour of Canada.

“Yep, I’ve been to Canada a bunch representing Bird Attack and hanging with bands on our label from there. I love it. It’s the skate punk capital of the world as far as i’m concerned and I’ve made some amazing friends up there over the years. It feels good to finally be able to play in front of them. I hope I don’t blow it,” Garrett Wadford responded.

His message to punk fans in Ottawa is simple and direct.

“Get ready for an absolute punk rock shred-fest. 4 bands, all friends and ready to bring an amazing show in one of our favorite Canadian cities. Get your ticket and I guarantee an amazing time. Come meet all the bands and lets party!,” Garrett Wadford of SLED concluded.

Spectrasonic and www.punkottawa.com present The Bird Attack Records Tour with 88 Fingers Louie, Belvedere, Such Gold, and Sled on Friday, October 6th, at the Brass Monkey (250A Greenbank Rd). Doors are at 7pm, and tickets are $25 in advance. Tickets are also available at Vertigo Records, both Compact Music Inc. locations and online. For more info about the show visit the Facebook event page.