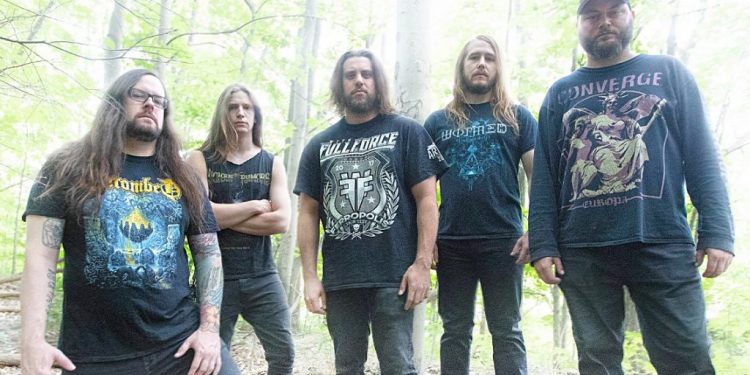 The title of the album represents a central theme for the band and shows why they are indeed Kings of the Nightworld.

Ryan Bart Williams, the former bass player of The Black Dahlia Murder, was heavily involved in the recording process of the new album Nightbringers.

“We’ve been trying to do it right here at home, like we’ve been trying to do for the last few records. We had our old bass player Ryan Wiliams, he was heavily involved in the recording. He tracked the drums, he tracked all the rhythm guitars and the bass. Brandon tracked his own leads at home in New Jersey. I did my vocals here in Detroit at my house. Joe Cincotta who did the new Obituary record came out here and recorded me. Then finally, we sent the whole thing to Denmark to Jacob Hansen to be mixed. Having a European touch on it was a good move. It’s something we’ve wanted to do for a long time because largely we sound very Scandinavian, so it was only natural,” Trevor Strnad replied.

The new album Nightbringers, like their previous releases, is out on Metal Blade Records.

“They’ve always been behind us since day one. I think Brian Slagel saw the passion of the band, and I think he saw a bit of himself in me – a nerd, a total rainman for death metal, or metal in particular. Wanting to know every band, turning every stone to look for new music. I think he saw we were real in that way. They’ve always put tons of elbow grease into the band since day one, and tons of advertisements. We re-signed with them twice now because it’s been so good. It’s a family affair with those guys, I know them all personally, we hang out. It’s a tradition when we go out to California to see those guys. I wish every band could have the kind of respect from their label that we get. I can’t imagine having to change labels multiple times like some of our peers. It must be so frustrating for them,” Trevor Strnad responded.

Brian Eschbach and Trevor Strnad are best friends. They have worked side by side since the inception of The Black Dahlia Murder in 2001.

“It’s been awesome. He’s my best friend. I think we have a great dynamic as far as creating music. I think we know each other like the back of our hand by now as far as creation and what we’re going to do. I think we have a really good chemistry together. He’s a silent partner in the eyes of the world. He doesn’t like to do press. When he’s being interviewed it’s like he thinks they are going to try to use something he says against him, so he keeps very tight lipped. It’s kind of funny, I don’t understand it really. I’ve always been more the face of the band, he’s like the boss, the number cruncher, the scheduler. He does a lot of the annoying shit I don’t want to have to do. We have a good dynamic in that way,” Trevor Strnad noted.

Trevor Strnad who is the lead vocalist of The Black Dahlia Murder also writes the lyrics. He describes the lyric writing process for the band.

“With the lyrics I’m responding to what they do musically. I try to ramp up every moment of the music, and make the lyrics really in sync with the ups and downs of the song. For the most part I’ll just be sitting with it. I will just try to read the song, and see how it makes me feel, and get an over arcing vibe for it. Then I’ll try to make some kind of topic that’s going to match it and hopefully and ramp up what ever feeling is there. I look to horror, a lot of early old horror, 80’s and before. It’s my special sweet spot. The world is also an increasingly violent place, and there is no shortage of inspiration there. I also look to the past of death metal. I try to represent The Black Dahlia Murder through that lens of what I like about death metal since I was 13. Cool cover art work that depicts often times a terrible place. It’s classic, stuff like that, I try to keep the staples there,” Trevor Strnad explained.

Growing up Trevor Strnad was inspired by bands like Suffocation and Cannibal Corpse.

“My first metal album I owned was “Pierced from Within” by Suffocation. It’s still my favourite of all time. Around that time I listened to Cannibal Corpse. Lyrically I’d say Cannibal Corpse is my biggest influence. Just the idea of a three minute comic strip, an individual story. For me when I was getting into death metal it was all about gore, bands like Broken Hope. I always enjoy blood and guts in my death metal. It’s so damn cliche, but so is everything we do, but it’s honouring traditions I think,” Trevor Strnad reminisced.

Brandon Ellis, who is the newest member of The Black Dahlia Murder was in a Cannibal Corpse parody band called Cannabis Corpse. Brandon Ellis has already left his mark on the band writing four songs off the new album.

“Brandon has brought a lot the band. I think he’s left a stamp on the new record in a major way. He’s not only an incredible lead player, but he wrote four songs for the album, which was a really pleasant surprise. I think he’s brought a lot of different elements. He’s brought a neo-classical Slayer to some songs, a good chunk of rock has been incorporated. I don’t think we’ve done anything like that before. The song “Good as Dead” has a real rock backbone to it. That’s just who he is. He’s turned 25, but he’s an old soul. His favourite bands are Toto and Starship – not like a normal person. He’s an incredible player. He’s kind of the secret weapon of this album,” Trevor Strnad pointed out.

This summer The Black Dahlia Murder played the Summer Slaughter tour and celebrated the tenth anniversary of their album Nocturnal which tore up the Billboard music charts.

“The tour was massive. The turn outs were outstanding. We played our third record nocturnal. I think overall it’s the fan favourite. I think that was the moment when a lot of people got into the band. We’re not only celebrating the anniversary of that record, but also the first time we were on Summer Slaughter. It felt really good to go down this nostalgic trip, and think of everything we’ve done and the successes. Seeing the excitement of the fans who weren’t there for that album cycle, and they’ve taken such a liking to it. It meant a lot to a lot of fans. I enjoyed it, definitely,” Trevor Strnad said.

What can fans expect in Ottawa?

“For the Ottawa show it will be a bit of everything. We’ll have a few more new songs in the fold, but by and large it will be a best of set. We’ll be playing a lot longer than festivals like Summer Slaughter where we only played for about 45-50 minutes. We played the album, plus the new song “Nightbringers” and “I will return” to close the set. This time we’ll be playing for an hour and fifteen minutes like we’d traditionally do as a headliner, so quite a few more songs, probably 18 songs,” Trevor Strnad added.

The event is all ages and licensed for 19+, doors are at 6pm doors and the show starts at 6:30pm. Tickets range from $32.50 to $27.50 in advance plus service charges. Tickets are available at Vertigo Records, both Compact Music Inc. locations and online.

This show is also celebrating 20 years of Spectrasonic music promotions in Ottawa.