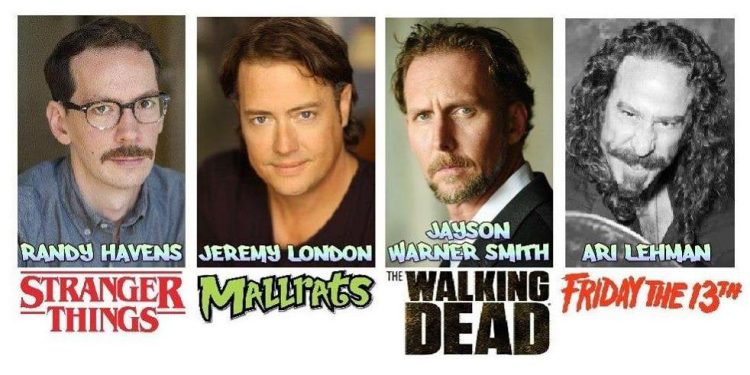 Cornwall Ontario – Cornwall & Area Pop Event (CAPE) is a two-day comic/pop culture convention held every year in April at the Benson Centre in Cornwall Ontario. The next takes place on April 21st and April 22nd 2018.

Four special guest have been announced: Randy Havens of Stranger Things, Jayson Warner Smith of The Walking Dead, Jeremy London of Mallrats, and Ari Lehman who was the first to play Jason Voorhees in the horror classic film Friday the 13th.

Read more about each guest here:

It’s easy to understand how Randy Havens, as Mr. Clarke, quickly became everyone’s favorite teacher/A.V. Club supervisor after binge-watching season one of Netflix’s smash hit Stranger Things. No stranger to the odder side of the tech world, Randy had a recurring role on AMC’s Halt and Catch Fire, where he plays Stan—an accidental adversary to Scoot McNairy’s character, Gordon Clark.

During Archer’s seventh season, Randy provided the voice for Mr. Rompers, the leader of a party-crashing clown gang out to steal something valuable. He has appeared twice on Fox’s Sleepy Hollow as McKenna, a pawnbroker who should probably rethink his associates. Randy has also appeared on The Vampire Diaries, Resurrection, Reckless, The Game, Past Life, and House of Payne.

His film credits include Let’s Be Cops and Good Intentions. Randy has a role in the sci-fi action/thriller Geostorm and is back for Stranger Things 2.

Scruffy yet terrifying, Jayson Warner Smith plays Gavin on AMC’s smash hit The Walking Dead. Gavin is a leader within the Saviors, tasked with weekly tribute collection from The Kingdom. Of all the Saviors we’ve met, Gavin is by far the most level-headed, which makes him supremely dangerous—keep an eye out for that one. Smith is also known for his turn as vicious death row inmate Wendall Jelks on The Sundance Channel’s drama Rectify. During season six on The CW’s The Vampire Diaries, Smith played Dean—the conman/mechanic didn’t last long when vampires arrived in Savannah, Georgia.

Smith has been a busy actor, not only teaching the craft in Atlanta, Georgia, but also appearing in countless television shows. Catch Smith in action on One Mississippi, NCIS: New Orleans, Sleepy Hollow, Coma an A&E mini-series, Final Witness, House of Payne, and Drop Dead Diva. His film work includes The Book of Love, Birth of a Nation, Christine (2016), I Saw the Light, Mississippi Grind, 99 Homes, Anchorman 2: The Legend Continues, 42, Footloose (2011), The Joneses, and People v. Leo Frank, plus more. Smith can be seen in the drama Thank You for Your Service, directed by Jason Hall (writer—American Sniper) and also in American Made, starring Tom Cruise.

Jeremy London snagged fan’s hearts with his role as Chandler Hampton on 7th Heaven. He thrilled them as bad boy Griffin Holbrook on Party of Five and View Askewniverse fans recognize London as none other than T.S. Quint from Kevin Smith’s Mallrats.

London’s career started in 1991 with a role on I’ll Fly Away. He went on to secure roles on several television shows, made for TV movies, and the mini-series Journey to the Center of the Earth.

His big screen credits include One More Round, Rain from Stars, The Devil’s Dozen which London directed, The Last Mark, Edge of Salvation, Alien Opponent, House Under Siege, Chasing the Green, The Grift, Gods and Generals, and White Wolves II: Legend of the Wild.

Ari Lehman is the actor/singer who has the unique honor of having played the role of the First Jason Voorhees in the Paramount Classic Horror Film Friday the 13th (1980). Ari got the call to play Jason Voorhees in “Friday the 13th” from Sean S. Cunningham himself, who famously asked him “Can you swim?”, Ari replied “Yes!” and the rest is Horror History. The original “Boy In The Lake” himself, Ari played a crucial role in the film’s famous final scene, in which he suddenly emerges from the icy waters of Crystal Lake. Working with Special Effects Master Tom Savini at an early age gave Ari a deep appreciation for the Horror Greats including Lon Chaney, Bela Lugosi, Boris Karloff and Vincent Price. Since 2009, Ari records and tours the US and Europe with his Horror Rock Band, First Jason Official based in Chicago.

Ari trained in Classical music and Jazz Piano and was presented with an All-State Award for Excellence in Jazz Piano and a generous scholarship to Berklee School of Music by the famous jazz educator, Dr. Billy Taylor. Ari’s music career led him to become a prominent touring Keyboardist for some of the top names in Reggae and African including Bob Marley’s own Tuff Gong Records and Interscope Records.

Ari became a regular on the Horror Convention Circuit, and immediately saw a great opportunity to give Jason Voorhees a musical voice on the Punk and Metal scene. Ari proceeded to draw upon his 20 years’ experience as a professional musician and recording artist and created First Jason specifically for Horror Fans, especially the fans of Jason Voorhees and “Friday the 13th”.

For info on other guests, exhibitors, and tickets, visit the CAPE official website.